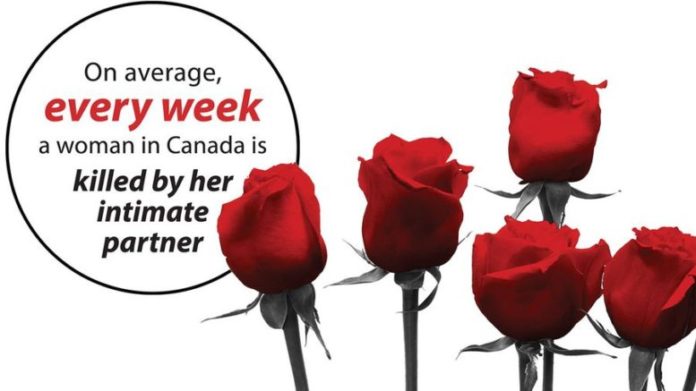 Canada’s deadliest mass shooting started after the gunman assaulted his partner. The shooting rampage on April 18 and 19 left 22 people dead. His partner was tied up and escaped into the woods. “This means that three of the deadliest mass killings in modern Canadian history – the 2018 Toronto van attack and the 1989 massacre at Montreal’s École Polytechnique are the others – had their roots in misogyny,” according to a Globe and Mail article.

Women in Canada are killed, on average, every six days by their intimate partners. Statistics Canada released a Canadian Perspectives Survey on the impacts of COVID-19 on April 8. It reported that one in 10 women are very or extremely concerned about the possibility of violence in the home.

Violence against women is rampant throughout the world. And the COVID-19 pandemic is making things worse for women. Around the world, women, working in essential services and caregiving in their homes, face risks from the Coronavirus. For many women, being locked in their homes with a violent partner is a bigger threat to their safety.

In countries with earlier breakouts of the coronavirus, there was a substantial rise in domestic violence. In China, for example, 90 percent of gender-based domestic violence referenced the COVID-19 pandemic. There are reports from China, Italy, and other countries that the number of domestic cases tripled since the pandemic started and from Brazil that it is up 40 percent.

It appears that the severity of the violence has increased during the COVID-19 pandemic. In just the past week, several media articles discuss the growing violence against women in Afghanistan, Latin America, and Palestine. Tal’at, an independent political feminist movement, reports 11 Palestinian women have been killed this year through domestic violence, with five of these deaths occurring since the early-March lockdown. In Argentina, at least six femicides (murders of women because of their gender) have been reported since the pandemic started and in Turkey at least 21 women have been killed since early March.

Many women have tried to escape violent situations, only to be denied shelter. In up to 80 percent of cases, this is because the shelter was full. A CBC special investigation revealed that in November 2019, “an average of 620 women and children a day were turned away from domestic violence shelters across Canada. That’s nearly 19,000 times a month, if November was typical.” And November was likely not typical; women are more reluctant to leave their families in advance of the holiday season, so the numbers were likely lower than average. More alarmingly, the numbers of women being denied shelter are growing. Statistics Canada reports, based on data from all the shelters in the country, a 69 percent increase in the numbers of people turned away each day in just four years: from 539 in 2014 to 911 in 2018.

U.N. Secretary-General António Guterres called on governments to “put women’s safety first as they respond to the pandemic.” He urged governments to declare shelters as essential services and continue to prosecute abusers and hold in prison individuals convicted of violence against women.

Violence against women is not new – it is endemic in class-based and capitalist societies. “Gender-based violence is a pandemic that has never really truly been dealt with,” said Marlene Ham, the Executive Director of the Ontario Association of Interval and Transition Houses (OAITH). “We know that we’re already dealing with shelters that can be at capacity or over capacity, so that’s our fear. We want to respond to the existing issue of gender-based violence and respond to COVID-19.”

What makes the violence so volatile now is that the pandemic forces women into confined spaces with abusive partners. Being isolated from the regular support of friends and family accentuates the danger. Women cannot easily escape to a coffee shop or to a friend’s place to reach out for help.

Yvonne Harding, a resource development manager with Toronto’s Assaulted Women’s Helpline (AWH), says that COVID-19 conditions are “ripe” for abusers. “It’s hard for good relationships to be in close quarters,” Harding said, adding that “non-stop close proximity and COVID-19-related job loss exacerbates household stress that can lead to violence. Plus, abusers feel emboldened because they know their partners can’t access support as readily as they used to.”

Self-isolation can be dangerous

Battered Women’s Support Services (BWSS) in Vancouver says that “although social isolating may help to reduce the spread of COVID-19, for many survivors, staying home is not a safe option. External factors that add stress and financial strain can negatively impact women experiencing domestic violence and create circumstances where their safety is further compromised.”

Abuse is about power and control. Abusers can exert control during the pandemic by withholding necessary items such as hand sanitizer or disinfectants, preventing survivors from seeking needed medical attention or sharing misinformation about the pandemic to control or frighten survivors.

BWSS, which receives 18,000 calls a year from women experiencing gender-based violence, reported on March 31 that “since we have escalated our efforts to reach out to women, our crisis lines have been ringing non-stop, calls have increased by 300 percent.” Forty percent are from callers reaching out for the first time. BWSS says the social isolation is making it harder for women to leave unsafe situations. Restrictions on travel during the COVID-19 outbreak make it more difficult for survivors to escape dangerous situations. Using public transportation or flying may not be an option.

Nisa Homes, a transitional home for Muslim and immigrant women and children that has shelters in Greater Toronto, Windsor, and British Columbia, has said their calls have doubled from 200 weekly calls to 400 over the last few weeks. Yasmine Youssef, the organization’s National Manager, reported a recent incident in which they acted quickly to remove a woman whose husband was threatening to kill her. She described another situation, where an abusive partner kicked his wife out of the home because he thought she would give him the virus.

OAITH represents over 70 Ontario shelters. It reports that over 17,000 women and children go through their shelter system each year. So far, 20 percent of these shelters have had an increase in calls.

Money for banks but not shelters

The federal government has announced funding of up to $26 million for approximately 575 women’s shelters, $4 million for sexual assault centres as well as $10 million for Indigenous Service Canada’s network of 46 shelters on reserve and in the Yukon. Angela Marie MacDougall, Executive Director of BWSS, says this is “completely inadequate.” When one considers that the government has bought up $150 billion in mortgages to give more money to the banks, the $45,000 on average for each shelter ($217,000 per shelter for shelters in Indigenous communities), amounts to a pittance. Are women’s lives that expendable?

A Vancouver hotel has provided a floor for women and their children who have no place to go. This space, operated by Atira Women’s Resource Society, is one of 21 locations in BC (939 spaces in total) the BC government has secured for homeless and vulnerable people who need to self-isolate because of illness. While important, this is nowhere near enough to meet the needs of vulnerable populations.

MacDougall says, “The only way to ensure safety for women is to make sure they have sustained access to information throughout the duration of the pandemic . . . and to secure more safe housing.” The BWSS has extended their crisis line’s operating hours to 24/7 with only the most experienced counsellors fielding calls, which have become increasingly harrowing.

Will last weekend’s tragedy spark widespread outrage about the violence that women endure on a regular basis? Will this be the wake-up call for people in Canada to demand more spaces in shelters, to ensure no woman facing violence in their homes gets turned away?

“We are saddened but in no way shocked . . . that violence against women lay at the heart of this heinous crime,” the Transitional House Association of Nova Scotia (THANS) said in a statement. . . . “We need to recognize the underlying attitudes and beliefs that tolerate and normalize smaller acts of violence against women and perpetuate an environment that leads to deadly outcomes.”

Like COVID-19, violence against women is a pandemic, one with a long trail of tears and death. It will take a mass movement to rise up against this scandalous situation. In the time of COVID-19, the priority is to protect the most vulnerable among us. Women facing violence and their children must be at the top of the list.