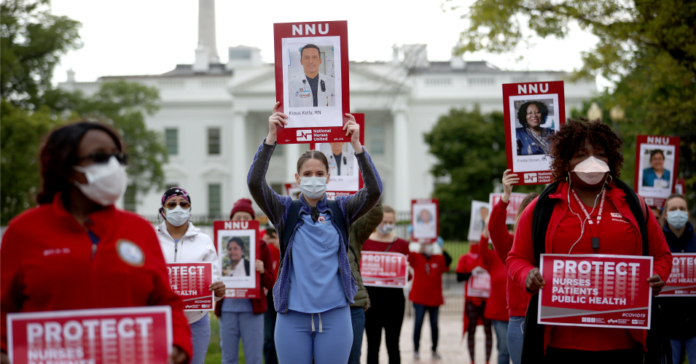 On May 1, many workers – both “essential” and those working from home – are planning to strike and protest for safe working conditions, an end to corporate bailouts, and for the right to organize.

Amazon warehouse workers are teaming up with Whole Foods workers to demand safe working conditions from their shared boss, Jeff Bezos. They are in discussion about joint action against Amazon on May 1. Amazon, a corporation raking in record profits during the Coronavirus crisis, has been the target of walkouts by its workers across the country since the lockdown began. Coordinated action of workers across Amazon’s empire on a united set of demands would be a huge step towards rebuilding a fighting labor movement.

Some grad students in the University of California system are also planning a strike on May 1 to demand an end to corporate bailouts that come at the expense of public education and services. They are demanding full investment in public services under the slogan, “Not one dollar cut, not one job lost.”

Socialist Alternative supports anyone taking action on May 1. With our limited resources, we are committed to doing whatever we can to build the biggest actions on May 1. This is why we have launched a “Pledge to Strike Back on May Day” which calls for coordinated “social distance” workplace action in union and non-union workplaces alongside solidarity protests in working class neighborhoods on May 1.

We are calling on the union leaders to drive this effort and use it as a launching pad for organizing drives in non-union workplaces across the country. This pledge has the support of prominent strikers like Derrick Palmer – an organizer of the walkouts at Amazon’s Staten Island warehouse, Vanessa Bain – an organizer of the Instacart strike – as well as local leaders in transit workers and nurses’ unions who have been on the front lines during this pandemic.

This pledge calls for:

Through our Workers Speak Out initiative, Socialist Alternative has hosted a series of industry-specific town halls of nurses, educators, warehouse workers, and grocery workers. Through this we’ve been able to facilitate discussions between workers across the country who have shared their experiences, compared notes, and are developing plans to carry the struggles at their workplaces forward.

May 1 is shaping up to be a day of intense activity through the combined workplace action and rent strikes being organized across the country. This pandemic demonstrates the necessity for a fundamental reshaping of the U.S. labor movement and May 1 could provide the launching pad.