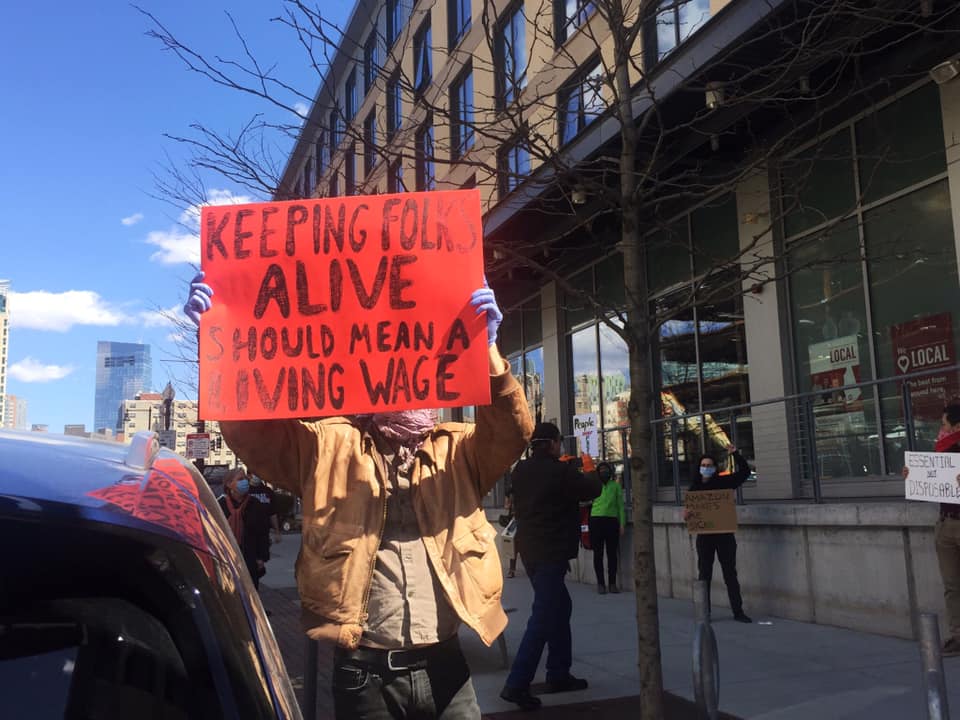 BOSTON — Grocery workers from across the city and their supporters gathered outside a Boston Whole Foods to demand that frontline workers receive the protections they need during the coronavirus crisis.

“Every day, there’s a risk that I’m going to pick it up, and take it home,” said Lisa Wilson, a grocery worker at Shaw’s and a member of Socialist Alternative.

The action was organized by a coalition of workers from four different grocery stores in the Boston area — Whole Foods, Stop & Shop, Trader Joe’s, and Shaw’s — along with activists from Socialist Alternative. Workers are demanding they be provided with proper PPE, including masks and gloves for all workers, hazard pay of time and a half and fully paid sick leave and family leave if they or a family member becomes sick, or if they need to stay home to watch their children who are home from school.

Workers and customers maintained social distancing guidelines while protesting, staying at least six feet apart from each other at all times. Wearing masks and gloves, 40 people lined the sidewalk outside the store, holding signs with slogans like “protect the frontline, not the bottomline” and “essential, not disposable.”

Some stores have implemented special protections for their workers, but none have done enough. Stop & Shop, where workers are unionized, was the first in the city to put up plexiglass shields between customers and cashiers. But, many workers there are without masks and gloves.

Pressure from the union forced Stop & Shop to give its workers a 10% raise during this crisis as hazard pay, while non-union Trader Joe’s, Shaw’s, and Whole Foods are giving their workers an additional two dollars an hour.

This increase is obviously not enough for workers who are quite literally putting their lives on the line to keep communities fed. All four companies have had employees test positive. Earlier this month, a worker from a grocery store near Boston died after contracting the virus.

Liam Easton-Calabria, an ER technician in downtown Boston who spoke at the standout, said “When companies refuse to offer adequate protections, workers pay the price.” Over the past weeks, he’s seen people die, or lay suffering in hospital beds with tubes in their lunges as they battle the virus. Some of this suffering could be prevented if all workers had adequate protections from the virus.

Workers must stand in solidarity to demand that those on the frontline have protections they need. And, we must fight for an economy not based around corporate profits, but human need. While we call on companies like Whole Foods to provide protections like hazard pay, we should also continue to fight for longer-term changes as well like Medicare for All. Right now, Easton-Calabria said, working people are paying huge sums for coronavirus treatment.

“We need people to know that they will be protected, and seek out care when they need it. We cannot have people worried about their own financial situation at this moment. It is not ok, and it will cause more deaths,” he said.

Wilson was laid off from her previous job because of the pandemic and recently started at Shaw’s. At first, she was happy just to have a job. But soon, she said, fears of contracting the virus began to overshadow her relief at being employed. Every day, she works in a store full of people who could be sick and not know it.

It’s not fair, she said, that she has to choose between having enough money to survive and potentially dying of coronavirus. And it makes it obvious that wealthy companies don’t value their workers.

“I’m an employee, but I’m a person. I’m a person before anything else,” she said. “And it doesn’t feel like that right now.”

The day after the protest, the Shaw’s store where Lisa works gave all their employees gloves and management finally began to enforce the “six feet rule” in the store.

Workers believe both of these are a testament to the effectiveness of their action and why they plan to keep organizing. The changes made by Shaw’s are good, but much more is needed and all companies need to step up. The coalition hopes their organizing can serve as inspiration to grocery workers across the country to come together, figure out what they need to stay safe, and demand it of their companies.

“We know that if we fight we can win,” said one worker at the protest. “But we have to fight.”