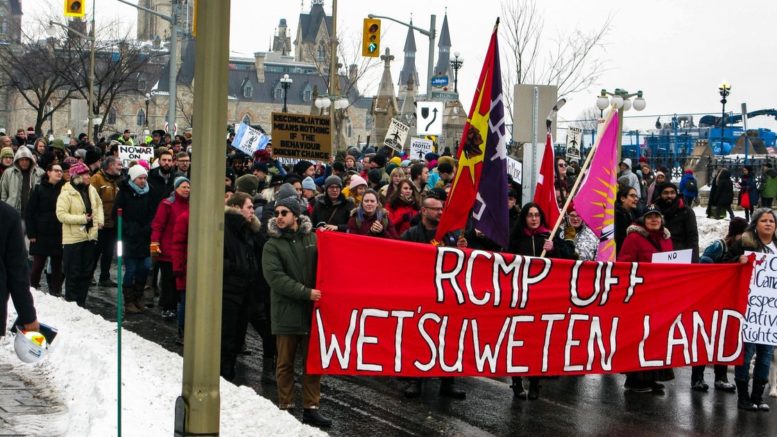 On Friday, February 21, Trudeau stated that “the barricades need to come down now.” This is a warning that his pretend conciliation is coming to an end.

On the same day the B.C.s’ Environmental Assessment Office has halted construction until Coastal GasLink consults with Indigenous communities.

As Parliament resumed this week, Justin Trudeau is facing what may be the most precarious and consequential political situation of his four years as prime minister.

Trudeau and his Liberal minority government have been shocked by and unprepared for the scope and sustained nature of the ongoing, nationwide solidarity actions and blockades in support of the hereditary chiefs of the Wet’suwet’en (for more on Wet’suwet’en resistance). The Wet’suwet’en, an Indigenous people from north-west British Columbia, have been engaged in a years-long struggle to protect their territory from the Coastal GasLink (CGL) pipeline that Trudeau and BC’s New Democratic Party premier John Horgan have approved and promoted. The backlash was provoked by the Royal Canadian Mounted Police’s invasion of Wet’suwet’en territory on February 7, and the arrest of 24 land defenders. The RCMP were enforcing a court injunction granted to CGL’s planned builder, the pipeline and fossil-fuel company TC Energy (formerly TransCanada Corporation). TC Energy has rejected a proposed route that would take the pipeline around Wet’suwet’en territory.

In the ensuing month, and especially in the past two weeks, Indigenous and non-Indigenous activists across Canada have paralyzed freight and commuter rail traffic, blocked access to BC’s parliament, delaying the speech to the throne, tied up city centers with sit-ins, and disrupted ferries and ports. These events have taken place not just in the big cities such as Vancouver and Toronto, but also in smaller cities, at U.S. border crossings near Kingston and Niagara Falls, and crucially for two weeks on cross-country rail lines in Tyendinaga and Kahnawake Mohawk Territories in Ontario and Quebec, respectively.

Rail companies CN and Via Rail reacted rapidly to blockades. CN announced the shutting down of all its freight trains throughout Eastern Canada. Via Rail, Canada’s main passenger service, for a time cancelled almost every route across the country, even though there were no blockades on most of its tracks west of Toronto or east of Ottawa.

The Trudeau government is reacting in a confused and hesitant manner, currently trying to maneuver a very narrow path between more widespread and brutal police repression (and the furious reaction that would entail) on one side, and being seen as tolerating a big squeeze on business, which the actions are certainly accomplishing, on the other. Maple Leaf Foods president and chief operating officer Curtis Frank stated that “every day the rail stoppages continue, $850-million worth of manufactured goods are sitting idle.”

It’s probable that some of Trudeau’s more hawkish advisors (and certainly some business leaders and newspaper columnists) would desire the plan of action advocated  by a former Alberta energy minister, Rick Orman, to guarantee infrastructure projects. Speaking of the planned Trans Mountain pipeline expansion, Orman implored the federal government to be prepared to “send in the military” against “ecoterrorists […] who are going to chain themselves to graders and backhoes.”

But it isn’t so easy as that, as Trudeau knows that a heavy hand would drastically spread and intensify the unrest in Canada and make headlines worldwide. He’s likelier to follow, with some adjustments, the same basic playbook as he has in the past: buy time, sound nice (if not strong), and if and when it’s necessary to finally appease industry and bring the hammer down, try to cover it in velvet first.

Trudeau is also facing what could be another, related political stumbling block. The proposed $20 billion Frontier oil sands mine requires approval or rejection by the federal cabinet this month. Pushed by resource giant Teck, it would be one of the largest industrial projects in Canadian history. It would destroy Canada’s stated climate change targets, even by the measure of the quite-insufficient Paris Agreement. The mine itself would extract 250,000 barrels of oil per day and create 4.1 million tonnes of greenhouse gases annually. According to the Pembina Institute, activities directly related to the mine’s operation would bring the annual emissions total to 6 million tonnes.

Such a move would be absolutely in accord with countless other governments that sign treaties with names like Paris and Kyoto—and instead of reducing greenhouse gas emissions in accordance with these agreements, obliterate the targets (and climate) and continue to increase emissions.

But a new difficulty for Trudeau is the level of potential opposition to this project within his own party. Many backbench Liberals, sensing the political ground shifting beneath them and fearing the increased opposition to continued fossil-fuel extraction represented by such actions as the youth climate strikes, are openly opposing the project. The cracks are beginning to grow.

The Conservatives –in Ottawa, Alberta, and elsewhere– are more brazen and united than the Liberals in their desire for these projects, with outgoing leader Andrew Scheer telling land defenders to “check their privilege” and demanding that Trudeau order the police to break up the blockades immediately.

The NDP, disappointingly but not surprisingly, is playing a cautious game, calling for an emergency House of Commons debate on the occupations but remaining unclear on its actual position. As they did with former Alberta premier Rachel Notley, the federal NDP will at all costs avoid criticizing a provincial NDP government. Even those now out of office, such as former NDP MPs from BC, Nathan Cullen and Murray Rankin, who Horgan has appointed as liaisons between the provincial government and the Wet’suwet’en hereditary chiefs, are going no further than calling for “dialogue.” The first step to real dialogue is to end the RCMP’s invasion of Wet’suwet’en and drop all charges against the arrested peaceful land defenders.

In BC, the NDP government passed the United Nations Declaration on the Rights of Indigenous Peoples (UNDRIP) in November. But in total contrast, the government  is a huge booster of the LNG project that Coastal GasLink is part of, having given the project billions of dollars of subsidies.

Trudeau has often uttered conciliatory and “progressive” words about Indigenous rights. “Going forward, recognition of rights will guide all government relations with Indigenous peoples,” he said to the House of Commons in 2018. They go right along with similar sunny phrases about his proclaimed commitment to fighting climate change. Trudeau has backed up these words with a pipeline purchase, rubber-stamp “consultations” on fossil-fuel projects, and a glacial pace on green energy investment.

Trudeau’s $4.5 billion purchase of the Trans Mountain pipeline was to show both Canada’s business elite and international investors that, one way or another, Canada would remain a reliable place to make profit. (The Parliamentary Budget Office reported that the federal government had paid far too much, estimating its value at as little as $3.6 billion, and even $2 billion if its planned expansion does not go ahead.) And now Trans Mountain’s projected expansion cost has ballooned to $16.2 billion, a 133% increase in just three years.

The land defenders and those in solidarity have a lot in their favor right now. The Liberals are, for the moment, reluctant to use more force. International oil prices remain low enough that both Trudeau and the oil companies are unsure whether big oil sands and pipeline projects will be sufficiently profitable – unless prices rise to at least $65 per barrel. Teck may not build their mine even if it’s approved.

Some unions, including the Canadian Union of Public Employees and the BC Teachers’ Federation, have declared their support for the Wet’suwet’en. The International Longshore and Warehouse Union workers refused to cross the picket line at the Port of Vancouver for three days. This labour solidarity is crucial and must deepen and widen. Some other unions, again hesitant to criticize the NDP for fear of something worse, and not wanting to put jobs at risk, have tried to soft-shoe the issue with calls for “both sides” to “return to the table.”

It is essential that workers not be made to pay for the capitalist class’s refusal to take responsibility for the economic and environmental messes it has made. Trudeau and big business will try to pit workers against one another and against the land defenders. This ramped up to a new level with CN announcing the temporary layoffs of 450 workers. Via Rail has announced the layoff of 1,000 workers. These actions are intended to pressure the government to attack the blockades. These, as well as threats to all workers affected by the economic slowdown, must be fought back against urgently.

Finally, we must remember that Trudeau, the oil barons, and the overall capitalist class see the current resistance as a dress rehearsal for the coming struggle over the construction of the Trans Mountain pipeline, where opposition could be orders of magnitude higher. If the projected costs continue to soar, and oil prices remain relatively low, Trans Mountain could be easier to defeat, but that’s far from a guarantee. Construction has already begun and a tremendous amount of political capital has already been sunk into it. The economic capital, however, could be put to far better uses: for a green energy and transport economy, with high-paying union jobs, including to address poverty in Indigenous communities.

What’s needed now, both to win the current battles and to prepare for the even bigger ones in the future, is for Indigenous people, youth, and organized labour to unite with a common, powerful, democratic plan for resistance and for transforming the governance and economy of Canada along socialist lines of common ownership, with land treated with stewardship not exploitation. This is the way that this growing movement can best serve this generation, the seven to come, and those after.