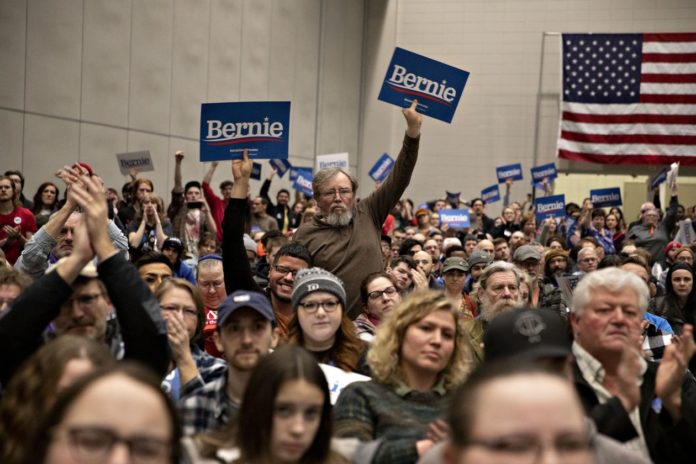 While we still don’t have the full outcome of the Iowa caucuses, it is clear that Bernie Sanders won the popular vote. Bernie’s army now moves on to New Hampshire, Nevada, and South Carolina where he stands to win or come in at a close second. This will position him well for Super Tuesday on March 3 when 14 states vote and the biggest share of delegates are allocated. Sanders is currently leading the polls in the biggest of them all, California. In another sign of Sanders’ momentum, exit polling in Iowa showed that 43% of people of color voted for Sanders.

What this moment starkly reveals is the challenge that working people and young people in this country face in trying to achieve real change: a dysfunctional and broken political system dominated by corporate interests. The Iowa caucus descended into chaos and farce as an app created by people with deep ties to the Democratic establishment, including Clinton operatives, failed. Then to compound the situation, the Democratic National Committee, a body that doesn’t even try to hide it’s anti-Sanders agenda, took over the process of tabulating the vote on Tuesday night.

This moment of incompetence and establishment meddling comes on the eve of Trump’s acquittal in the Senate impeachment “trial.” As we warned from the beginning, the Democrats’ focus on the Ukraine phone call and not Trump’s real crimes — against working people, poor people, immigrants, women and the environment — risked letting him off the hook. This is exactly what has happened. He has not been convicted and beyond that, his popularity is at the highest point at any time in his presidency!

The leadership of the Democratic Party can only be described as pathetic. As their incompetence in Iowa is front page news, Trump struts in his State of the Union address. Meanwhile all Nancy Pelosi can offer to millions of enraged Americans is transparent theatrics, ripping up his speech.

The truth is that while the Democrats say their priority is getting rid of Trump, their real number one priority is to stop the growing movement behind Sanders, the candidate with the best chance of defeating Trump! They scream about “unity” and “vote Blue no matter who” all while they sabotage Sanders and prepare to engage in every manner of dirty tricks on behalf of their ruling class masters against the emergence of a working class political force.

The very first caucus of the 2020 primaries was in Ottumwa, Iowa where 14 of the 15 caucus goers cast their vote for Bernie. The vast majority of them are Ethiopian immigrants who work at JBS Pork, a pork plant where Bernie volunteers set up between midnight and 2am to catch the workers during shift change. Chris Laursen, president of UAW Local 7 which represents workers at JBS Pork, said: “That’s what’s special about Bernie’s campaign. It’s not a campaign, it’s a movement. Bernie literally has an army.”

This is precisely what terrifies the Democratic Party and has thrown them into chaos. Their fear is not just because Bernie Sanders stands for Medicare for All or universal rent control or a Green New Deal. It’s not even because he calls himself a “democratic socialist.” It is precisely because of the millions of working-class Americans determined to fight alongside him for radical change. They are afraid of the one million people who have signed up to volunteer for his campaign, and the thousands who travelled to Iowa from around the country to build the movement behind Bernie.

In response to this, party leaders have discussed changing the Democratic National Convention rules to reintroduce the prominence of superdelegates. Superdelegates are self-selected party insiders and elected officials who played a big role in tipping the scales toward Hillary Clinton in 2016. They are “unpledged” delegates who can cast their vote at the Democratic National Convention for whichever candidate they prefer, historically they have almost entirely lined up behind the establishment pick. In 2018 the Convention rules were changed so that superdelegates can no longer vote in the first round and their votes are only triggered if there is no clear winner. DNC executives have discussed in recent weeks eliminating that rule and allowing superdelegates to again cast their vote in the first round. Don Fowler, a former DNC chairman, himself admitted that this would create, “the most hellacious fight you’ve ever seen at the Democratic convention.”

Beyond just considering rule changes, the party leaders have gone ahead and enacted them! They’ve gotten rid of the individual donor requirement for debates, opening the door for billionaire Mike Bloomberg to participate.

They are prepared to use the same – and likely much worse – dirty tricks as in 2016 to deny Bernie the nomination. Their maneuvers in 2016 which handed the nomination to corporate candidate Hillary Clinton ultimately paved the way for Trump’s victory and the danger of a repeat in 2020 is clearly posed.

The Democratic Party leadership has lost control of the situation. As we’ve written since the primary battle began, the establishment has been unable to find a consensus candidate to rally behind as they did with Hillary Clinton in 2016. Joe Biden has been able to ride Obama-era nostalgia and his politics of “practicality” to prop up his campaign and maintain front runner status for months, however the results in Iowa have served to pull the curtain back on the conundrum facing party elites.

Joe Biden is going to come in fourth place and may not even meet the 15% qualifying threshold to get actual convention delegates. The argument peddled by the corporate media that Biden is the most electable candidate in the race is falling apart at the seams.

Meanwhile millennial mayor Pete Buttigieg came in second in the popular vote. He has been anointed the title #MayorCheat after prematurely declaring victory on Tuesday night with 0% of the vote in. Despite walking away in second place, Buttigieg will still face an uphill battle in becoming the establishment favorite. He will almost certainly face crushing defeat in many upcoming primaries including South Carolina where he has failed to win over black voters, and this problem will likely only compound as the primary process unfolds.

Biden’s flop and Buttigieg’s lack of support among a huge section of the Democratic Party voting base pose a real challenge for the party’s establishment who are desperate to rally around a candidate who can defeat not Trump, but Sanders.

Today, millions of Bernie’s supporters are furious at what is at best the incompetency of the Democratic Party and at worst an outright sabotage. The completely undemocratic events surrounding the Iowa caucus demonstrate the type of opaque and shady dealings we will be up against from the Democratic Party leadership.

As the party ramps up its attempt to block Bernie from becoming the nominee, we need to build an even mightier movement behind his campaign. We need to prepare to organize mass mobilizations to block their undemocratic maneuvers of which we’re certain there will be more.

It is clear we need to break from the stranglehold of the Democratic Party and build a new political party with genuine democratic structures, something Bernie is extremely well positioned to initiate. The starting point for this should be a conference of Sanders supporters, win or lose, after the Democratic National Convention to begin discussing the formation of a new party.

It is still very much up in the air whether Sanders will take up this project himself as he has already declared that he will support the Democratic nominee regardless of who it is. We would urge Sanders not to line up behind the corporate Democrats and demobilize his supporters but instead provide an inspiring lead for the millions of us behind his campaign. If he does not take the necessary steps to break from the Democratic Party despite their ferocious opposition to our movement, those of us who support his vision of a political revolution will need to do it ourselves.