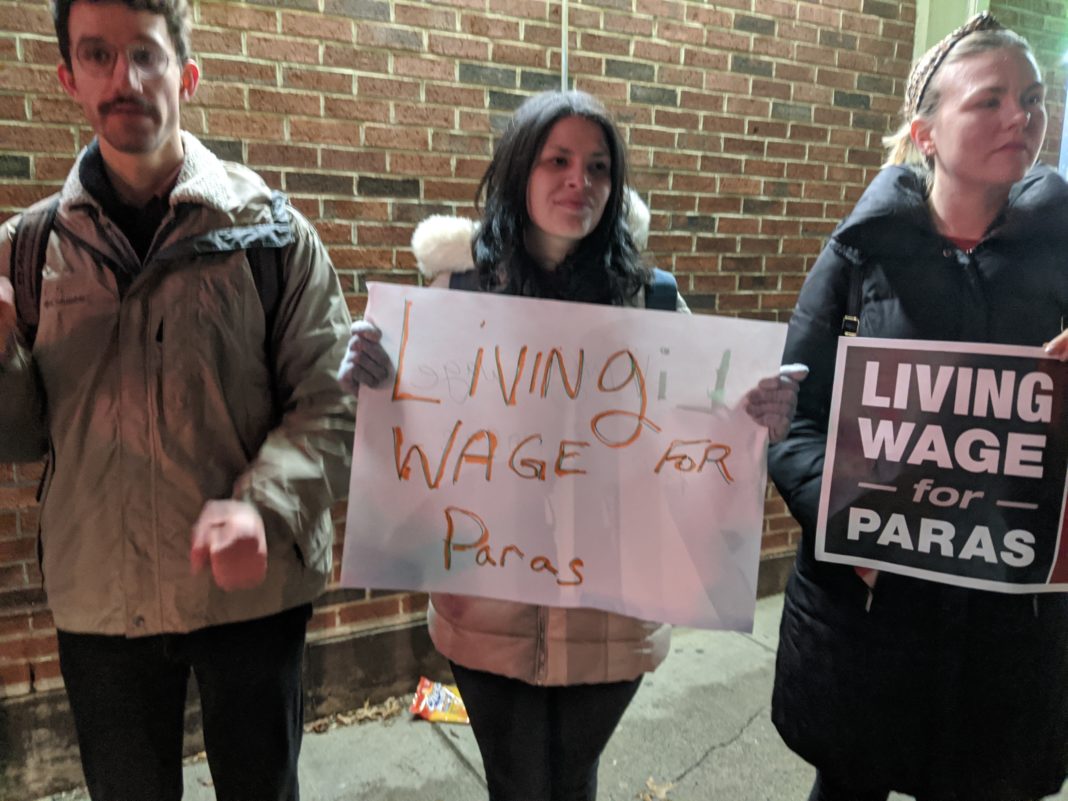 Margaret Whittier-Ferguson is a pre-k paraprofessional in Somerville, Massachusetts. She is chair of the Somerville Teacher Association’s paraprofessional Contract Action Team as they fight for a fair contract with a livable wage and job security. Margaret is also a member of the Cambridge/Somerville branch of Socialist Alternative.

Paraprofessionals are vital to our public schools. We are education support staff that work with teachers to deliver curriculum, support students’ social-emotional skills, and ensure the basic needs of our students are met.

The current salary for our full-time jobs is between $20,680 and $25,502, even for paras who have worked in Somerville for decades. Somerville Mayor Joe Curtatone has said we are in a “booming economy” but the cost of living for working people is skyrocketing. Many paras work second or third jobs to survive.

What We’re Calling For

All we’re calling for is three main demands, and we don’t think they’re unreasonable:

It is going to take a widespread and powerful movement to win a better contract for paras and for our students. From within the union, it can’t just be paras fighting this fight. We’re only one-sixth of the union. If we’re going to build this movement further, we need every teacher behind us and showing not just passive support, but active support. And of course, we need parents and the community as well.

As everybody marched into City Hall, chants echoing off the walls, the mood was electric. With standing room only, 42 people spoke in public comment during the School Committee meeting. STA President Rami Bridge received some of the longest and loudest applause of the night after calling out the School Committee’s lawyer who referred to their proposal as a “market adjustment.” But as Rami said, “We are not seeking a ‘market adjustment,’ but a fundamental change in the way we pay, respect, and value paraprofessionals.” Over half of those who spoke were parents, and 10 were teachers. Now, we need to focus on getting more teachers involved in this struggle!

Public comment at School Committee meetings are restricted to Somerville residents, but many paras can’t even afford to live in Somerville on their current salary! This felt like a real slap in the face given that we spend our days working with and teaching the kids of Somerville families but can’t even advocate for our students or ourselves to the School Committee. Recognizing how unfair this is, people began chanting “Let them speak” at several different points throughout the night. The last round of chants pushed the Mayor to weigh in, forcing School Committee President Carrie Normand to allow non-resident para Daphnee Balan to speak, which was an important victory. Daphnee’s powerful speech about the difficulties of raising her daughter on her current salary can be watched and shared here.

It’s good that Mayor Curtatone pushed for allowing all paras to speak, but will he come out in support of a starting salary of $25,000? Anything less is simply not enough.

Many people watching this struggle may be wondering where it’s headed, so we need to make it clear: We don’t want this to go to a strike. We want a starting salary of $25,000 and we want to win it as quickly as possible. This is why we need strong tactics now — the School Committee meeting was a great first step, but packing School Committee meetings isn’t a silver bullet for us to get a fair contract.

On Thursday, January 30 all educators and staff at every Somerville School will be participating in “Walk-ins.” A “Walk-in” is when all educators at a school arrive early for work, meet outside the building, hold a 5-minute rally, and walk into school together to show we are united in this fight. Many unions have used “Walk-ins” as a tactic to build pressure on School Committees. This tactic will also help us get ALL educators involved with this struggle.

In addition, we need more before-school parent flyering and canvassing in the community to continue to grow our community support. Parents should continue to organize themselves and continue to spread the pledge of support. We will be hosting a Community Meeting on Wednesday, February 5 at 7:30 PM (at the STA office, 54 Chester St in Davis Square).

It is also important that we have frequent general membership meetings to keep the whole union up to date and united. The STA has a general membership meeting scheduled for Tuesday, February 11 at 3:15pm (Location TBD), which all STA members should attend. There will be updates, discussion, and debate on tactics and strategy, and will be crucial for getting more paras and teachers actively involved.

On February 24, we will rally outside City Hall and pack the School Committee meeting again! It is important to keep up the energy around this fight for a fair contract and make sure School Committee knows we are not backing down until we win a $25,000 starting salary, job security after 4 years, and a 2-year contract.

Lastly, the Somerville Teachers Association is part of the Massachusetts Teachers Association, the largest union in New England. We need to partner with other MTA locals and the Boston Teachers Union to build this movement. We have seen the importance of cross-union solidarity in the #RedForEd movement nationally. It is only with a united movement of paras, teachers, parents, and the community that we will win a strong contract!

My organization, Socialist Alternative, has been playing an important role by garnering community support through flyering, reporting on the struggle through our website, regular newspaper, and social media, and working with me and other union members to help develop a strategy to win. Being able to draw on the experience of Socialist Alternative in other union struggles has been invaluable in developing a winning strategy for this contract fight. Socialist Alternative members have been turning out, turning others out, and helping mobilize active solidarity from other unions at events like the School Committee and upcoming community meeting.

Support staff has been left by the wayside in school districts across the country and we have reached a breaking point. Educators have been fighting for better working and learning conditions across the country in the #RedForEd movement. Shortly after we voted “no” on a contract proposal that still didn’t allow for a para to make $30,000, paras in Malden voted down an inadequate contract proposal! Paras in Philadelphia are entering into a contract struggle of their own.

It is time to bring forward the struggle of support staff as part of the wider fight of courageous educators nationally, in fighting for a living wage and better learning conditions for our students. We hope our struggle in Somerville can act as an inspiration and encouragement for paras everywhere to fight for what we and our students rightfully deserve.