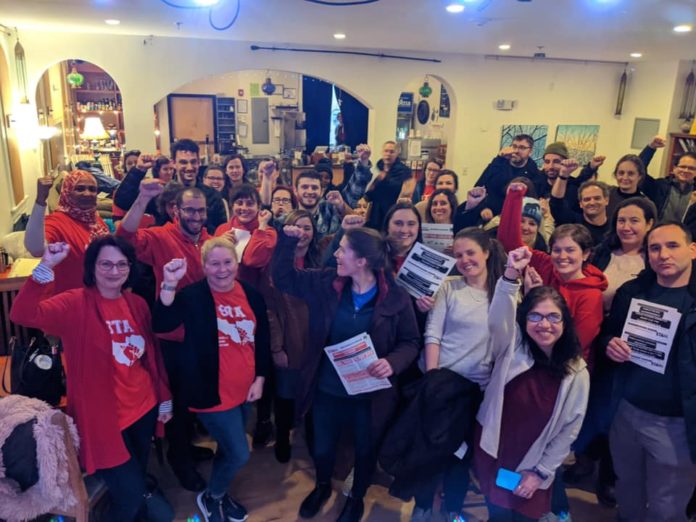 Margaret Whittier-Ferguson works in a prekindergarten classroom as a paraprofessional in Somerville, Massachusetts. She is a Building Representative with the Somerville Teachers Association and the chair of the paraprofessional Contract Action Team as they build a campaign for fair salaries and job security for Somerville paras. Margaret is also a member of the Cambridge/Somerville branch of Socialist Alternative.

How are paraprofessionals currently treated in the Somerville public schools?

I currently make around $21,000 a year as the second educator in a pre-K classroom of around 20 students. In our current contract, the most a paraprofessional can make is $25,502. There are paraprofessionals that have worked in the district for over 20 years and still don’t make a living wage. Most paraprofessionals work a second or even a third job.

We have no job security year to year. Every year, we have to wait for a letter that doesn’t come until June saying whether or not the district will hire us again the following year.

As we are seeing student needs increase, the jobs of paraprofessionals have shifted. We’re not just making copies, we’re supporting behavior management plans, running small and large groups, and making sure students’ special needs are met. We work with high needs students and provide 1-on-1 support.

Many students, especially younger ones, do not distinguish between their teacher and their para. They see both in equal light. While our job descriptions have grown, our salaries are not increasing at a rate even close to the cost of living.

Why are paraprofessionals fighting back and what are your demands?

It’s clear that our working conditions are untenable, especially as housing and health care get more and more expensive. The average 1-bedroom apartment in Somerville goes for $2,633 per month, or $31,596 per year. We are calling for job security after 4 years of working in the district, and a starting salary of at least $25,000.

Educators know that our teaching conditions are students’ learning conditions. We aren’t just fighting for ourselves: we are doing this because when we win, our students win.

Last spring, the Somerville Teachers Association (STA) elected a new leadership slate from the caucus SCORE (Somerville Caucus of Rank and File Educators). This slate was elected on a platform of fighting for schools that students and educators deserve as well as increased transparency.

In October, 77% of paras voted “no” on the district’s proposed contract. Now we are fighting for a contract that actually meets our needs. A strong contract for paraprofessionals also means better learning conditions for students!

How does this connect to educators’ struggles across the U.S.?

This is part of a broader picture of public education being under attack. Increasing numbers of educators are standing up for improved teaching and learning conditions. Paraprofessionals in Somerville are joining educators across the country in fighting back, including paras in many cities.

In Philadelphia, paras are organizing a movement called #ParaPower to prepare for their negotiations which start this Summer. Following Somerville paras voting “no” on the district’s proposal in October, paras in Malden, a neighboring district, also voted “no” on a similarly inadequate contract.

Even though Massachusetts just received extra funding for education, class sizes are still too big and we don’t have the support services our students need. As support staff, paraprofessionals in particular see the increasing needs of our students not being met.

Across the country, educators have won salary raises, smaller class sizes, more school nurses and school psychologists, and overall have improved the education children are receiving. The key to their success has been getting organized all together, including parents and the community, and fighting back. That’s what we’re hoping to do here in Somerville.

Where do things currently stand and how will you win?

We are now back at the negotiation table and the district is still refusing to budge in any significant way on both salaries and job security. In December, they proposed adding just $300 per year to our salaries from the deal we already voted down. We are calling for a starting salary of $25,000.

We are proposing job security after 4 years, and the School Committee came back with a counter-proposal for 15 years. They claim this is because the turnover rate is so high, but they have it backwards. The turnover rate for paras is high because of low pay, no job security, and difficult working conditions. Eliminating high turnover is not only important for paras’ livelihoods, it is crucial for our students’ educations.

The district says their focus this year is equity for students, but in order to be equitable for students, we need to acknowledge that educators’ quality of life and compensation are major factors that need to be addressed.

To win a fair contract we’re going to have to go all out. This won’t be won just by our union leadership or a few paras being involved.

Less than 24 hours following this meeting, Superintendent Mary Skipper and School Committee Chair Carrie Normand sent an email to all SPS parents. This shows our pressure is working. Unfortunately, they try to paint paras and our union, the Somerville Teachers Association as asking for too much and being unwilling to compromise.

Throughout their letter, they only talk in percentages, never mentioning the actual dollar amounts under discussion. The problem with this is clear: a large percentage of a small number is still a small number.

What we are asking for is simple. The starting salary should be $25,000 and paras should have the right to job security after 4 years. We don’t think this is unreasonable.

The next big step is going all out to mobilize for the School Committee meeting on Monday, January 13th, where educators, parents, and the community will meet outside, all wear red, and walk in together. People should share the Facebook event with everybody they know and post it on their pages!

Other unions mobilizing their members, many of whom are parents of Somerville Public School students, to the January 13th School Committee would go a long way. Somerville City Councilors, many of whom are progressives, part of Our Revolution, could also help to mobilize the community. Already one City Councilor, an SPS parent himself, went on record at the December parent and community meeting saying he would vote against the city’s budget this Summer if paras don’t yet have a contract. If all City Councilors pledged to do this, that would exert extra pressure on the School Committee.

Ultimately, whether we win will depend on the strength of our movement, and how many people get actively involved. If we build a strong, united movement of educators, parents, and the community I believe we can win a fair contract, and make schools that both paras and our students deserve.