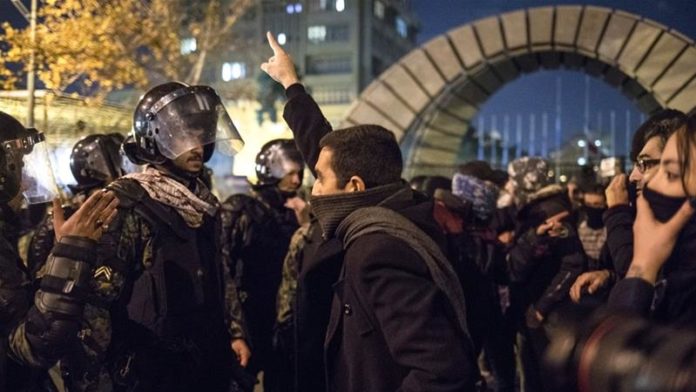 The new year had an ominous beginning, with the assassination of top Iranian general Qassem Soleimani in a drone attack by the U.S. military near the Baghdad International Airport. This  escalation of U.S./Iran tensions created an understandable fear of an even wider conflict. There was widespread discussion among young people about the return of the military draft.

The result of the drone assassination was a further round of tit-for-tat actions between the U.S. and Iran. The Iranian military launched airstrikes against two U.S. bases in Iraq, injuring 11. Trump then introduced new sanctions against Iran and used the threat of tariffs against the U.K., France, and Germany to pressure those governments into publicly condemning Iran. Tensions have since cooled down, but are far from resolved.

The possibility of a widening conflict with Iran is very real, including the danger of this spilling out into a wider regional conflict in the Middle East. Workers and youth in the U.S. and internationally need to build a movement capable of stopping such a development. However, the danger of the U.S./Iran conflict spilling into a world war as devastating as World Wars I and II is not on the table. Also a ground invasion of Iran, which has twice the population of Iraq, would require an enormous troop mobilization and would provoke mass opposition in the U.S. on a scale probably even greater than during the run-up to the invasion of Iraq in 2003.

The assassination of Soleimani is the latest stage of an offensive by the U.S. against Iran which began with Trump pulling out of the nuclear accord negotiated under Obama. Iran has been economically crushed by U.S. sanctions going back to the 1980s, but the Trump administration has dramatically escalated tensions with Iran.

The way in which Trump took the decision to launch the attack in itself indicates the erratic nature of his rule. Not only did he ignore Congress, which is supposed to sanction such actions, reports imply that he barely consulted his own advisors. However, the conflict can’t be blamed simply on the personal peculiarities of Donald Trump. This is part of a wider crisis facing U.S. imperialism. The overreach of the “Bush Doctrine” (America as the world’s police) has allowed the growth of rival imperialist powers, like Russia and China, as well as the strengthening of Iran’s role as a regional power.

The Trump administration’s role in the Middle East has been wildly unpredictable. The assassination of Soleimani is not the first time Trump nearly sparked a military conflict with Iran. Another standoff occurred in June of 2019. At the same time, Trump campaigned in the 2016 election under the promise to get the U.S. out of its “endless wars”. Following the June 2019 incident with Iran, Trump dumped his National Security Advisor John Bolton, one of the chief architects behind his hawkish foreign policy. In October, he withdrew troops from Rojava, the Kurdish region in Northeastern Syria, and allowed Turkish and allied forces to enter.

Behind both his warmongering, and his promise to end the “endless wars,” Trump is riding on a growing global wave of nationalism. Trump’s “America First” isolationist policy is, in large part a reaction to the view which exists among ordinary people, a section of the military, and a smaller section of the establishment that the U.S. has gained little from the massive expenditure of economic and military resources in the Middle East. At the same time, U.S. capitalism cannot afford to withdraw from the Middle East due to ongoing economic and military interests in the region. Trump’s more hawkish actions in the Middle East have been similarly based on an “America First” approach of nakedly protecting those economic interests.

While socialists oppose U.S. imperialism’s self-declared “right” to assassinate its opponents, no socialist will shed any tears for Qassem Soleimani. He headed the notoriously brutal “Quds force” – the Iranian regime’s military units used for intervention abroad – where he propped up repressive pro-Iran forces in the Middle East. He has been no friend of ordinary people. When students participated in mass demonstrations in Teheran in 1999, Soleimani threatened to organize a military coup to overthrow then-president Mohammad Khatami if he didn’t crack down on the protests.

Soleimani’s presence in Iraq involved propping up the pro-Iranian government in the country amidst massive anti-government protests sparked by corruption and lack of jobs. These protests also demanded the end of Iranian influence in the country, and the removal of all foreign forces including the U.S. In Baghdad, Soleimani helped the Iraqi government repress this movement, boasting, “we in Iran know how to deal with protests.” The state repression against the Iraqi protests resulted in hundreds dead and many more wounded.

This however is absolutely no justification for the assassination of the general and his entourage. The assassination of Soleimani has actually helped to bolster support the theocratic Iranian regime which has stepped up its anti-U.S. propaganda, making it more difficult for the protest movement there to continue. In the immediate wake of the assassination Iran saw a wave of protests with hundreds of thousands chanting “Death to America” and carrying portraits of Soleimani.

This occurred as Iran was facing its biggest internal challenge from mass opposition since the 1979 Revolution. In 2017-2018, a mass movement developed, against attacks on working people, but soon spread to challenge the whole theocratic regime of Ali Khamenei. After a lull in 2019, the movement reemerged on a far larger scale, particularly against the lowering of fuel subsidies. This was met by ferocious repression.

While the assassination has temporarily bolstered popular support for Khamenei’s regime in Iran, it hasn’t completely ended open defiance. After the Iranian military accidentally shot down a Ukrainian passenger jet, there were widespread protests against the attempted cover-up. Authoritarian regimes will be overthrown and sectarian division overcome across the Middle East through mass struggles of the working class and youth, not through U.S. military intervention.

In spite of a recent uneasy calming of tensions, the threat of wider conflict is real, and workers and youth in the U.S. and Iran need to prepare to rebuild an anti-war movement.

Bernie Sanders has correctly condemned the moves towards war with Iran. But other Democratic politicians, including other presidential primary challengers, have limited themselves to critiquing Trump’s refusal to seek congressional approval, rather than the warmongering itself.

The Democratic Party is not a reliable ally against imperialist intervention. Before Trump, it was the Obama administration that normalized the practices of using combat drones to carry out assassinations, using the euphemism “targeted killings.” The assassination of Soleimani went further in that it was directed against a key figure of a sovereign nation, while Obama’s assassinations were directed against members of al-Qaeda. Less than a month before Soleimani’s assassination, the Democratic-controlled house voted for a $22 billion increase in “defense” spending while voting down an amendment that would have prohibited the Trump administration from using any funds to launch an unauthorized, offensive war against Iran.

We need to build a mass anti-war movement. High-profile individuals like Sanders and Ocasio-Cortez should use their profile to mobilize mass anti-war demonstrations in response to further escalation by Trump. The working classes in the U.S. and Iran have more in common with each other than with any imperialist or theocratic government.