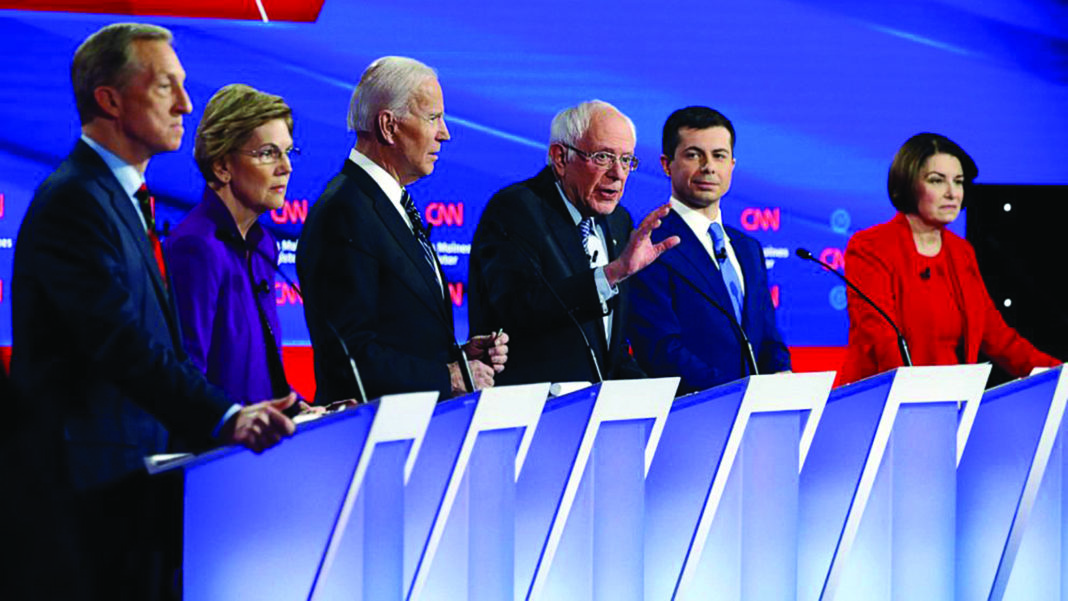 Climate catastrophe, the threat of war, and widening inequality are thrusting ordinary Americans into struggle. The last few years have seen the reemergence of the U.S. labor movement, with more workers going on strike in 2018 and 2019 than at any point in over 30 years. Young people have taken to the streets in the hundreds of thousands against climate change and gun violence. And this is all in the context of a world in turmoil, with millions protesting in India, Ecuador, Lebanon, Iran, France, and countless other countries.

As voting begins in the Democratic primary, the establishment faces a tremendous challenge. The political, social, environmental, and economic crisis facing U.S. society is driving millions of young and working class people into the orbit of Bernie Sanders and his political revolution. His slogan of “Not me, us” and his emphasis on the importance of mass movements stands in stark contrast to the rest of the Democratic field.

We support Bernie Sanders because his pro-working class program has inspired millions of Americans to fight back. His class struggle politics speak directly to the needs of working class people who have suffered tremendously under the business-as-usual politics of the past 40 years. His 2016 campaign can be cited among the main sources of inspiration for the teachers who launched the #RedForEd movement, and he has decisively brought socialist ideas back on the agenda.

For the same reasons we support Bernie Sanders, the billionaire class and its representatives in both parties despise him.

Over recent months, the establishment has scrambled to find a way to diffuse the momentum behind Sanders’ campaign.

During the beginning of the race, the main strategy of the political establishment and corporate media was trying to ignore Bernie Sanders into oblivion. A report by In These Times found that MSNBC talked about Joe Biden three times as often as Bernie and when they did manage to talk about Bernie the coverage would generally be negative. Between Bernie, Biden, and Warren, Bernie was the least likely to be talked about positively and most likely to be talked about negatively.

Much to the disappointment of the establishment, the “Bernie Blackout” wasn’t slowing his momentum. Support for Sanders has only grown and in recent weeks he has surged to the front in many polls in early primary states as well as nationally.

Demonstrating the flexibility of the establishment when it comes to silencing working class fighters, in recent weeks the media blackout around Sanders has been turned inside out. The “Bernie Blackout” has turned into an all out assault.

The most recent line of attack has been that Sanders is a sexist. For months, and in fact years, Bernie’s support among women and people of color has been consistently under reported. The “Bernie bro” myth was repeated ad nauseum in 2016 to paint a picture of Bernie’s base as being heavily white and male. This stands in stark contrast to reality wherein Bernie leads the pack among women under 45 and finds more support among people of color than white people.

Now, in 2020 the “Bernie bro” myth is being resurrected with Elizabeth Warren’s accusation that Sanders told her a woman could not win the presidency. We find the timing of this accusation highly suspicious and for many Sanders supporters it simply doesn’t square with his decades long anti-sexist record. In the wake of this controversy, NBC News ran an article comparing Sanders supporters to Trump supporters, alleging they are trying to “bully people into submission.”

While the New York Times recent dual endorsement of Elizabeth Warren and Amy Klobuchar reflects the establishment’s ongoing difficulty in finding a consensus candidate, Joe Biden is still the front runner and most immediate challenge for Sanders.

While Biden is himself a Democratic Party insider and reliable corporate insider, he does find support among people who could otherwise be convinced to vote for Sanders. A recent Politico poll found that among Biden supporters, 29% of them identified Sanders as their second choice – more than any other Democrat in the race.

Biden’s support rests on a certain nostalgia for Obama-era politics with his insistence that he will usher in a “return to normalcy.” His most consistent argument throughout his campaign has been that he is the candidate best positioned to beat Trump. This understandably appeals to people’s desperation to see Trump knocked out of office.

However, genuinely grappling with the question of how to beat Trump requires looking beyond the political mathematics of corporate pundits. It requires understanding how Trump got elected in the first place.

For decades working class Americans have been subjected by both Democrats and Republicans to neoliberal policies that aimed to claw back the gains of working people in the interests of empowered multinational corporations. In 2016, the candidate hand picked by the Democrats to go up against Trump had long ties to Wall Street and viewed many Americans in the Rust Belt as fly-over “deplorables.” Millions of people who voted for Obama could not be moved to vote for Hillary Clinton and either abstained from voting altogether or – in some cases – voted for Trump.

Bernie’s campaign strategy is to turn out non-traditional voters by giving them something to vote for. This is something Biden simply cannot do. Even among those who voted for Obama and then Trump, Bernie is finding real support. In the 206 counties that went for Obama in 2008 and 2012 and then to Trump in 2016, Sanders has raised more than three times as much as Biden, Warren, or Buttigieg. All with small dollar donations.

Sanders Should Ramp Up the Fight

February will be a decisive month for the Sanders campaign. If he manages to walk away with a win in Iowa and New Hampshire, we can expect attacks from the establishment and corporate media to hit new heights.

Elizabeth Warren’s failed strategy in recent weeks says a lot about her political approach. She has worked very hard to make herself more palatable to the Democratic Party leadership by dropping any mention of Medicare for All in the last debate, by highlighting the importance of party unity above all else, and by ramping up attacks on Sanders. This has led her support to fall rather than grow. Her strategy of making concessions has backfired.

In the coming weeks and months, Bernie will be under enormous pressure to tone down his message and demobilize his supporters. The best way to resist these pressures will be to activate his base even further, building the movement behind his campaign to back him up.

If he is able to build a movement strong enough to overcome the obstacles in the Democratic Party and win the nomination – the need for his supporters to get organized becomes more important by degrees of magnitude. Every obstacle imaginable will be placed in his path to the presidency and he will need the ability to call on his supporters to organize a grassroots ground war. If Sanders rapidly launched a mass organization of his supporters to carry out this fight, it would truly represent a political revolution.

We Need a New Party

It is quite a disturbing component of American politics that we have to dedicate entire articles and speeches to warning against the attacks and sabotage from within the Democratic Party. A mass working class resistance is by its very nature a virus to the Democratic Party – a party tied so fundamentally to big business. As Alexandria Ocasio-Cortez articulated last month, “In any other country, Joe Biden and I would not be in the same party.”

For Sanders and his supporters to reshape the political character of the Democratic Party would require a no-holds-barred war against corporate influence, kicking out the establishment gatekeepers and corporate elected representatives, implementing a coherent progressive political program, and building genuine democratic structures within the party. We have zero faith that the party’s establishment would allow such a thing to happen.

Working class people need our own political vehicle through which to wage our battles for Medicare for all, a green new deal, and a cancellation of student debt. Bernie is the best positioned figure in the U.S. to launch such an organization.

As we have been arguing in this paper for months, we think that Bernie and AOC need to urgently begin organizing a conference of their supporters after the primaries – regardless of the outcome – to prepare to launch a new mass membership organization. A conference like this could be a first step in the process of forming a new political party in the U.S., one that can articulate, independent of big business, a political vision for working class people to overcome the dominance of the billionaire class over our lives.