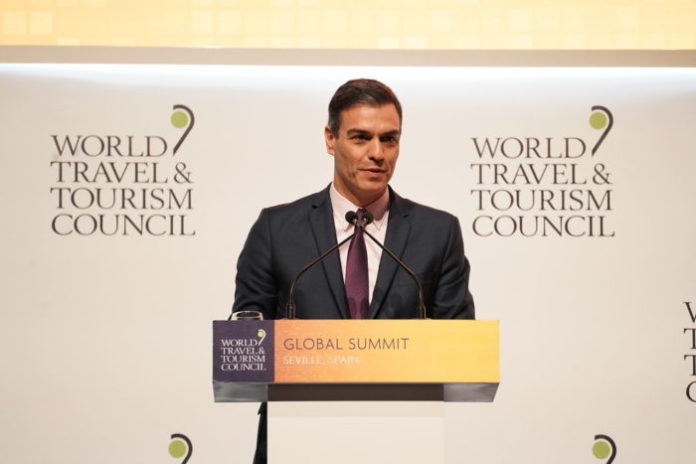 Only the struggle on the streets will bring about real change for the working class!

By Viki Lara, Socialismo Revolucionario (CWI in the Spanish state)

Pedro Sanchez was installed as president of the Spanish government in almost dramatic fashion, by only a two vote difference, after several vote changes, threats and insults by email and use of fascist graffiti symbols against the deputies who had announced their intention to vote to elect Pedro Sanchez as president. Amid invitations to cross party lines by Ciudadanos’ Ines Arrimadas, there was nervousness from both PSOE and Unidas Podemos (Podemos and United Left electoral coalition), who counted votes one by one from their seats. All of this in the middle of a parliamentary session that the right wing tried to break up with interruptions, insults, and cheers of “long live” the king and Spain.

All of this, of course, reflects the growing political polarization in the Spanish state, the result of a brutal economic crisis and the enormous cuts that workers throughout the Spanish state have suffered to our living standards and social services. Let us remember that the working class has still not recovered from the 2008 crisis, that we continue to have more unemployment, worsening working conditions and wages; and that investment in basic public services such as healthcare and education has not yet reached levels similar to those before the 2008 crisis.

In addition to this polarization, there continues to be enormous instability that capitalism has been unable to resolve in the last four years, with four general elections, various failed attempts to form a government, coups d’état within PSOE to get them to abstain and facilitate a PP government, and votes of no confidence. The instability is not going to be reduced with this new government, formed with the tightest vote since the 1978 regime was established with a perspective of a difficult and convulsive term in office, where the government will have major difficulties to get important measures, such as budgets, passed to ensure it can keep the government intact.

Many workers have received with a sigh of relief, and even with joy, the results of the last two general elections, which stopped a possible coalition government of the right and extreme right. Millions are glad that Pedro Sánchez’s inauguration has finally been achieved with a governmental agreement between PSOE and the UP which is described as progressive, feminist and environmentalist.

The agreement between PSOE and UP announced in December presents some measures that have been received positively by many workers. These include the repeal of some of the aspects of the 2012 labour reform, the raising of the minimum wage (which, they say, will reach 1200 euros), rent controls, pension increases in line with the pricing index and greater increases for minimum and non-contributory pensions, etc.

However, a more detailed reading of the agreement reveals a program with many measures aimed at businesses, even if they are hidden behind the language of “job creation”, “reindustrialization”, “Green New Deal” (in relation to support for businesses during the ecological transition) and a long etcetera.

In addition, there are many limits to the measures proposed that will directly affect the working class. For example, the minimum wage will be increased gradually and will be conditional on the report of an “advisory cabinet” to the Ministry of Labour that will consider issues such as the “general economic situation”. Even if the expected minimum wage increase of 1200 euros per month is implemented, the great precariousness in which many workers live, including the small number of hours per week that formally appear on their contracts, will mean that many workers will not receive this salary.

As far as labour reform is concerned, Zapatero’s (President of the PSOE government in office until 2011) labour reform of 2010 will remain in force, which already significantly attacked workers’ rights, with measures such as the reduction of redundancy pay to 33 days per year worked; and not all of the PP’s 2012 labour reform, but only the points highlighted in the agreement. There will still be many measures in place to make employment “flexible”. For example: companies, alleging economic or “technical” reasons, to disengage from the collective agreement affecting their sector.

In addition, as we have already stated in previous articles, the coalition program commits UP to “compliance with fiscal discipline mechanisms”, and to deficit and debt reduction. This means, especially in the scenario of a new economic crisis that could be close, that priority is given to fiscal stability, and to meeting the criteria imposed by the European Union in relation to the payment of public debt and bailouts, rather than to measures in favor of the working class or public services.

This is a very dangerous scenario for UP, which is tied to a completely capitalist party such as PSOE in this coalition, and which could become perceived by many workers as more of the same, another party of the “establishment” that crushes their rights and living conditions and makes the workers pay for their economic crises. We have argued before that entering the government, instead of supporting its formation from the outside to block the right and then politically opposing a PSOE government, would leave UP even more isolated from the workers and the struggle in the streets. This withdrawal from the streets and full entry into the institutional game had already caused UP to lose many votes and seats during the last elections, and its support base could be further diminished in favor of other forces that are perceived as more “anti-system”. From this point of view, far right Vox could position itself as an anti-system force and rally even more support.

As we have pointed out before, the rank and file of UP has to be attentive to the measures implemented by the government, to fight and force the implementation of those that are in favor of the working class and to force UP to leave the coalition government if cuts are made to our living conditions or public services.

Honeymoon for the new government?

Some of the measures announced by the government will undoubtedly provoke a reaction from both the markets and other reactionary forces such as the Catholic Church, and harsh attacks from the parties representing these forces in parliament, especially PP, Ciudadanos (Citizens) and Vox. This will happen, for example, if measures are soon implemented such as the elimination of grades for the subject of religion, the exhumation of the victims of Francoism or the introduction of a day to honor them, a law effectively approving euthanasia, etc.

By implementing these measures, and some limited economic measures against the banks, or the big electricity companies, the government could give, at least for a period, the sensation of fighting against the forces of reaction and against the markets, and this could win it some support from the workers and youth. Of course, any some positive reforms in economic aspects, and increased budgets for public services, will be welcomed.

However, this government will not be a stable one and the political landscape will remain highly polarized. In the Basque Country, a general strike has been called for January 30th, supported by the unions ELA, LAB, and CNT among others. These organizations demand a minimum pension of 1080 euros and a minimum wage of 1200, a working week of 35 hours, and retirement at 65 years of age among other issues.

Socialismo Revolucionario, defends this path, that of struggle, in order to achieve real changes in our lives such as the end of job insecurity, investments in public services that also create quality jobs with decent salaries, and the immediate implementation of social housing from currently empty houses. In the current scenario, the bourgeoisie will shout out against even the most limited measures, either directly or through its representatives in the institutions. Basque workers are showing the way for the rest of the Spanish state to fight for our wages, labor and democratic rights and public services. We must continue to mobilize to achieve a state-wide call for a strike, since the majority unions, CCOO and UGT, have no intention of calling it against a “progressive” government. The only way they will do so is if they feel the pressure of their rank and file and the wider movement.

Furthermore, the left and the trade union movement must be vigilant and fight against every attack from the extreme right on women, immigrants, the LGBTQ movement and the workers’ movement in general. We must not forget that in addition to the new institutional power that Vox has gained at the state level, its far-right ideas and demands are being pushed in the governments of several autonomous communities, including Andalusia, Madrid and Murcia.

Another major axis of polarization will be the negotiating table that has been set up between ERC (Catalan pro-independence party) and PSOE. On the one hand, as we saw during the elections and the inauguration, PP, Citizens, Vox and other forces, including some of the so-called “PSOE barons” will not miss the opportunity to proclaim that a pact is being made with coup d’état leaders or even terrorists, that Spain is being broken or, in a supposedly social tone, that “equal rights” among Spaniards are being taken away. Of course, all these voices are silent about the fact that the real inequality is between the workers and the bourgeoisie, and that this inequality has not stopped growing since the outbreak of the crisis in 2008.

Against this backdrop, it is quite possible that the negotiations between the central government and the Generalitat (Catalan government), apart from being slow and obstructive, will only lead to very lackluster agreements that do not respond in any way to the aspirations of the movement for an independent republic. Instead of pacifying and calming the situation in Catalonia, these negotiations may lead to new tensions and once again to mass demonstrations and strikes as we have seen repeatedly in recent years.

To this must be added the latest decisions made by the European Union institutions that have led to the recognition of Junqueras (political prisoner) and Puigdemont and Comín (exiles) as MEPs, which clearly went against the decisions taken by the Spanish state and called into question the entire judicial process that has condemned Catalan political prisoners to very harsh prison sentences. This undoubtedly presents an urgent need for the movement to continue to mobilize in order to achieve significant steps forward in the situation of the prisoners, including demanding the release of Junqueras to exercise his position as an MEP while continuing to clarify his situation of immunity from prosecution.

These latest setbacks suffered by the state courts also reveal their true reactionary and repressive nature, which has already manifested itself on many other occasions, with the judicial persecution of rappers and, tweeters (who expressed leftist ideas) and union or feminist activists. This aspect, together with the common struggle of all workers in the state and internationally for our rights and living conditions, must be the bridge that unites the entire left, including the rank and file of the unions and UP, the CUP and Bildu, in a struggle against the Spanish capitalist regime and all its reactionary institutions, including fighting for the end of the monarchy, and against the economic which it props up: capitalism. Only through this determined struggle will we achieve true democratic rights, including Catalonia’s right to self-determination, or real social changes such as nationalizing the main sectors of the economy such as finance, the energy sector, transport and communications to organize massive public investment in public services, for quality employment, to solve the housing problem and to fight against climate change.

* On January 12 the European Parliament accepted the Spanish courts ruling stating that Oriol Junqueras cannot take public office and therefore revoked his status as MEP. Junqueras announced he will appeal this decision.