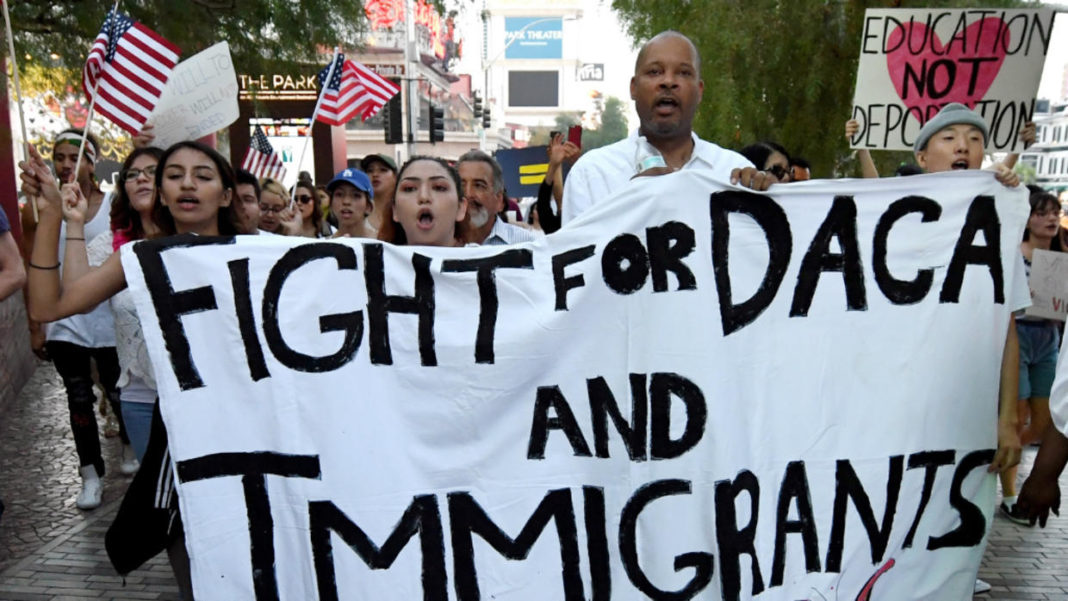 Since June 2017, 700,000 Dreamers have faced an uncertain future. In 2012, these young immigrants, brought to the U.S. as children, won legal residence and work permits under the Deferred Action for Childhood Arrivals program (DACA). DACA was implemented by an executive order of President Obama after the 2010 DREAM Act failed in Congress. It requires renewal every two years and lacks any path to permanent status or citizenship. DACA was from the beginning a temporary patch aimed at the unsustainable situation facing millions of people. But under Trump’s presidency, which declared its intention to end program in June 2017, the vulnerability of DACA has become very clear.

Trump’s decision to terminate DACA has been challenged in court after court, and now its fate will be decided by the Supreme Court. If DACA is terminated, these 700,000 young undocumented immigrants would be at risk of being deported to countries that many don’t even remember, in many case without even speaking the language.

The Supreme Court is expected to rule on the case between January and June 2020. But the balance is not tilted towards the Dreamers. None of the judges questions the ability of the president to end the program. Rather they’re debating the legality of its abrupt termination. Moreover, the conservative majority that president Trump ensured after appointing Brett Kavanaugh has made it clear that they will likely allow the Trump administration to end DACA. As of now, Dreamers’ futures are full of uncertainty and doubt.

Attacks on DACA are an Attack on All Immigrants

The attack on DACA is part of a broader anti-immigrant agenda that the Trump administration promoted from the beginning. Indeed, the current polarization over the issue has been created by Trump himself. In March 2018, 84 percent of Americans “generally supported DACA” (Politico/Harvard University poll). The border wall, the separation of families at the border, the raids of poultry factories in central Mississippi last August, the extreme limitations on the right of asylum, and the deplorable conditions of immigrant children under government custody, are just a few of the serious attacks inflicted by Trump to the immigrant community.

The attacks on immigrants are not just a feature of the Trump administration – indeed it has deported 44% less than during Obama’s first three years.

Anti immigration rhetoric has been a key part of rallying Trump’s base, but it serves another purpose as well. The very real fear that at any time an ICE agent may knock on your door and destroy your life creates a lower class workforce forced to accept the worst pay and working conditions, one that is constantly afraid of standing up to demand their rights. This drives down the working conditions and living standards of all workers. While parts of the ruling class favor “immigration reform” and keeping DACA they also favor maintaining immigrant workers as second class citizens.

Moreover, while the Trump administration is keeping the focus on its attacks on immigrants, it has snuck through a whole array of anti-worker reforms such the pro-big business and billionaire tax reform, appointing an anti-labor NLRB, continuous attacks on Medicaid and Medicare, and serious cuts to the SNAP program (removing food assistance to nearly 700,000 unemployed people).

The attacks on immigrants is just the tip of the iceberg of a broader anti-worker and anti-poor agenda that ensures that Trump and his billionaire friends continue making super profits at our expense. The termination of the DACA program would be not only a huge blow to the immigrant community but also to the working class as a whole, emboldening Trump’s anti-worker, pro-big business agenda.

Defend DACA to Build the Power of the Working Class

We need to unite against the pro-billionaire agenda of the Trump administration and the establishment of the Democratic party. We need to not only defend DACA, but improve it with a path to permanent status for Dreamers and other undocumented immigrants. On top of this we need Medicare for All, millions of well paid unionized jobs as part of a Green New Deal, and to rebuild the power of the American labor movement.

Only by fighting together and building our collective power we can defeat the powerful interests of the billionaire class. Bernie Sanders and AOC, as the leading figures of a growing socialist base, as well as the unions, should be at the forefront of building this broad movement. We need to unite Dreamers and undocumented immigrants with a broader fight for workers rights. This could start tilting the power balance in our favor, paving the way for workers to take control of our societies and our lives.