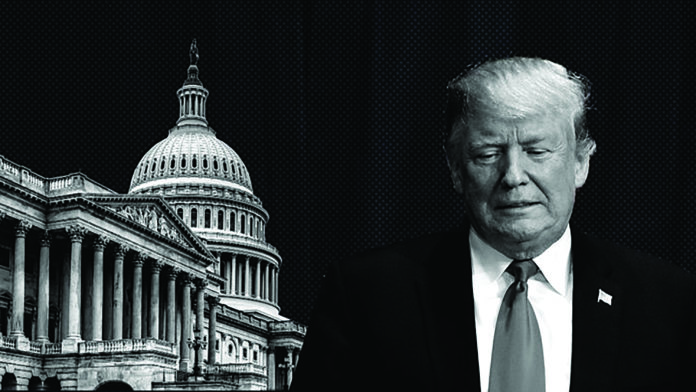 Wednesday December 18, Trump became the third president in history to be impeached. This article was written just before and is the feature of the back page of our upcoming December-January newspaper issue.

Donald Trump’s presidency is a threat to working-class people in the U.S. and around the world. His racist, misogynist administration has emboldened white supremacists and contributed to an increase in violent hate crimes. By cheerleading for the fossil fuel industry and rolling back environmental regulation he is actively pushing the accelerator toward global climate catastrophe. His erratic, self-serving foreign policy points toward deeper international tensions and the possibility of more wars. It is urgent that Trump be removed from office as quickly as possible.

While the House impeachment process moves toward its conclusion, Trump has again escalated his attacks on ordinary Americans by announcing major cuts to SNAP, the government’s nutrition assistance program for low-income families. The Democratic Party leadership has so far ignored this emergency for the 700,000 low-income families now facing imminent hunger in favor of a narrow focus on Ukraine and impeachment, despite knowing there is almost no chance of the Republican-controlled Senate voting to remove him from office.

Democrats Let Trump Off the Hook

On December 10, House Democrats introduced two articles of impeachment against Donald Trump. The first article accuses Trump of abusing the power of his office by withholding military aid and a formal state visit in order to pressure Ukrainian officials to do him political favors in the lead-up to the 2020 elections. The second article accuses him of obstructing justice by instructing federal employees not to cooperate with the impeachment investigation.

By insisting on focusing the public’s attention on the narrow issue of Ukraine, the Democratic leadership have proven themselves uninterested in launching an effective fightback against Trump’s real crimes: emboldening white supremacists, abuses at the border, attacking women’s rights and workers’ rights, ripping up of environmental regulations, enriching his own family at the public’s expense, and more. Mobilizing on these issues represent the best opportunity to build the strongest possible challenge to Trump in 2020.

While tens of millions support impeaching and removing Trump, demonstrating how badly people want him gone, this support is very passive and many feel the Democrats have failed to make a convincing case for removal on the basis of Ukraine. By contrast, following the white supremacist attack in Charlottesville in 2017, 40,000 people took to the streets in Boston. Around the country there were mass demonstrations against Trump’s immigration policy in June of 2018. The Women’s Marches protesting Trump’s rampant misogyny were the biggest protest in U.S. history! If the Democrats were to initiate impeachment proceedings based on Trump’s brutal attacks on working people – issues for which there’s already public outcry – these impeachment proceedings and the Senate trial could galvanize far more people.

We must warn that the strategy of the Democratic Party could seriously backfire. Their uninspiring approach to impeachment, combined with their lackluster establishment candidates in the 2020 race, are not providing any real vision of an alternative to Trump. In fact, there has been a recent dip in support for impeaching and removing Trump just as the proceedings in the House are escalating.

Just how out of touch their approach is can be summed up by an exchange Biden recently had with a voter which has since gone viral. When asked about the implications of Biden’s dealings with Ukraine by an Iowan voter during a recent campaign stop, he lost his temper, called the man a “damn liar” and challenged him to a push-up contest. Such a response reveals not just Biden’s weakness as a candidate, but the weakness of the Democratic Party as a whole in their inability to respond to the genuine concerns of millions of Americans that the entire political establishment is corrupt.

Figures like Bernie Sanders and Alexandria Ocasio-Cortez are proving that massive support for pro-working-class politics exists among the Democrats’ voter base, but also among independents and even Republican voters! By ignoring these issues and doing everything they can do sink Bernie’s candidacy, the party leadership is undermining our ability to defeat Trump in 2020 just as they did in 2016.

Working people cannot afford another Trump victory. While the Democratic leadership avoids discussion of Trump’s real crimes, Bernie Sanders should use the coming Senate trial as a platform. He should call for mass protests against Trump’s brutal attacks on ordinary people and for a government that represents the interests of workers, not billionaires. Such a move would appeal to the frustrations of the majority of American voters across the political spectrum who correctly feel ignored by the entire political establishment. Organizing the mass anger at Trump’s policies is by far the most effective way to defeat him and could also raise Bernie’s standings in the polls. We need to defend against ongoing right-wing attacks such as the potential repeal of anti-discrimination protections for LGBTQ people and terminating the DACA program for Dreamer immigrant youth by the right wing dominated Supreme Court in early 2020.