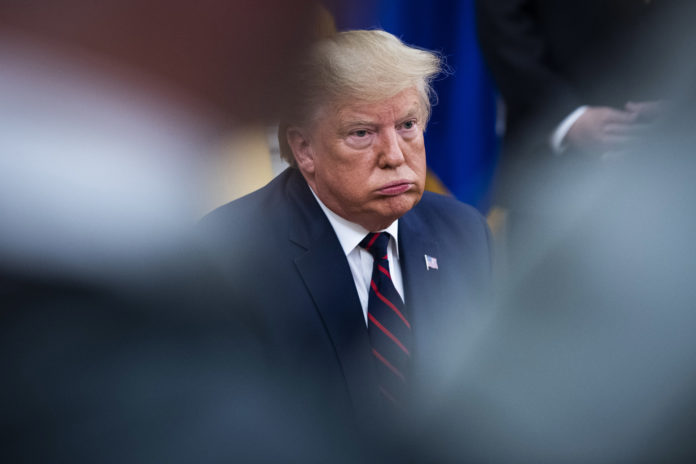 Tens of millions of people are looking to get Donald Trump out of office. In his nearly three years in office, he has doled out tax cuts for the richest Americans, systematically stoked racial divisions, ripped up climate regulations as a gift to big energy corporations, and nominated a serial predator to the Supreme Court.

Throughout his term, the Democrats have sat on their hands as Trump has savagely attacked the interests of working-class Americans – particularly immigrants, but also black people, immigrants, women, and LGBTQ people. They have not, up until this point, even seriously considered how to boot him from office.

A renewed discussion on impeachment has emerged after years of pleading from ordinary people, yet the impeachment proceedings do not take up any of Trump’s real crimes detailed above. Instead, the focus is on Trump’s shady dealings with Ukraine. These allegations are far more substantive than the Russian investigation, which were a political circus.

What Are the Allegations?

A whistleblower sounded the alarm when Donald Trump threatened to withhold military aid from Ukraine until they investigated Joe Biden and his son Hunter. As vice president, Biden allegedly called for the firing of a Ukrainian prosecutor who was investigating Burisma Holdings, a Ukrainian gas company with Hunter Biden on the board. Trump was clearly attempting to muscle a foreign government for political advantage at home. Trump’s actions are a clear violation of the Constitution. They also reflect Trump’s effort to purge the state apparatus at the highest level of anyone perceived as “disloyal” to him. In the case of the Ukraine a parallel diplomacy was run by Trump’s lawyer, Rudy Giuliani.

The impeachment investigation has seen a number of career diplomats and “national security” officials prepared to come forward, defying the White House’s attempt to stonewall and not cooperate with Congress. This has been described as the “revenge of the deep state.”

These events go to the heart of why the Democrats have chosen this terrain. They genuinely see Trump as a threat to the interests and credibility of U.S. imperialism which they unequivocally defend. Socialists are opponents of the role of the U.S. military and diplomatic apparatus around the world which has consistently and brutally defended corporate interests, whichever party is in office. However, we also oppose Trump’s authoritarian tendencies and his attempt to turn the state apparatus into an extension of his personal reactionary political operation.

It is odd however that the Democrats have chosen to focus on an issue that points to the endemic corruption of the entire political elite, including themselves. Who believes for a second that Hunter Biden’s no-show $50,000 a month job with Burisma was not given to him as part of an attempt to influence the Obama administration? Nor was this the only example with Hunter Biden. Today, Trump’s children are busy trying to profit from his time in office with international deals.

The Trump administration and Republican Party are in crisis in reaction to these impeachment proceedings. This was on full display on October 23 when Republicans in Congress staged a protest outside of a closed door meeting where a Defense Department official was testifying.

In response to the threat of impeachment, Trump took to Twitter comparing his experience to a lynching. There was an immediate backlash to this outrageous characterization and even Mitch McConnell called it a “poor choice of words.”

While Trump’s dealings with Ukraine represent a clearer line to impeachment than the Russia investigation, we reject the narrow approach being taken by the Democratic Party leadership. It is one thing to win the votes in the House to impeach Trump — which if accomplished would represent a real blow to his administration — but it is another thing entirely to remove him from office and defeat his reactionary agenda.

If Trump is impeached by the House, the Senate will hold a trial on whether to remove him from office. This will require a two-thirds vote on a body where the Republicans hold a majority. At the moment, barring catastrophic further revelations or a fundamentally different approach by the Democrats, there is basically no chance of the Senate voting to remove him.

An alternative approach, one which rouses public pressure, is ready-made for the Democrats. While they focus exclusively on his shady dealings with Ukraine, there are countless “impeachable offenses” for which there’s already public outcry. However, the Democrats are not prepared to go in this direction because they are opposed to building a movement that would go beyond removing Trump to actually trying to defeat the agenda of the right.

The Democrats themselves acknowledge that their focus on Ukraine is not taking hold with the public the way they’d hoped. While they’d planned to hold an impeachment vote by Thanksgiving, they are now delaying that in order to buy time for a series of public hearings to make the case to the American people. In a recent New York Times article, Rep. Hakeem Jeffries – chairman of the House Democratic Caucus – said: “If we tell that story with simplicity and repetition, the American people will understand why the president must be held accountable. If we don’t, then there is great uncertainty, and in that vacuum Donald Trump may find himself escaping accountability again.” Jeffries is right to be worried. The Democrats’ approach could rebound if the undecided public minority conclude that the Republicans are right that this is just a partisan witchhunt and that insufficient reason is being given for removing the president from office.

The timing of the Democratic establishment launching the impeachment inquiry must be seen in the context of the presidential elections where they do not have a reliable and steady representative in the running as they did in 2016 with Hillary Clinton. Biden, their preferred candidate, is prone to frequent gaffes and his campaign appears weakened. These impeachment hearings appear to be a politically expedient way to draw attention away from the polarized primary race. If that is the intent this doesn’t seem to be helping Biden.

If the Democrats succeed in impeaching Trump, which at this point seems likely, it will give the party’s establishment more authority going into the general election. However, even if Trump is impeached on this basis there’s nothing precluding him from still running for re-election.

What we are seeing right now is a second wave of support coalescing around Bernie Sanders following the endorsements of Alexandria Ocasio-Cortez and Ilhan Omar. Bernie and AOC’s newly-formed alliance is a tremendous step forward. They drew over 25,000 people to a rally in Queens. They both fight for rent control, Medicare for All, a Green New Deal, cancelling student debt, and so – a polar opposite to Trump’s agenda of tax cuts for the rich and racist dog whistling.

For tens of millions of Americans the ultimate goal is not Trump’s impeachment, or even Trump’s removal from office. Rather they are demanding serious change to substantially improve their quality of life through universal health care, free college, high quality affordable housing, and a comprehensive plan to halt the worst effects of climate change. Trump is a massive obstacle in the path of winning these victories, and defeating him is a necessary step in the process of building a mass movement for socialist change.

Bernie Sanders and AOC have stated that defeating Trump has to be part of a wider movement of working-class people against inequality, racism, and sexism. But this points to building a new party based on the interests of working people. They will find themselves in near constant conflict with the leadership of the Democratic Party in this project as the party’s leadership would prefer to keep the question of Trump’s impeachment completely separate from programmatic demands.

If the Democrats widened their approach to impeachment to include his reactionary right-wing and anti-worker agenda they would be far better positioned to defeat Trump long term. This is precisely what Bernie and AOC should be fighting for. This approach could bring onboard the young people who marched in the hundreds of thousands against climate change, the workers going on strike across the country against corporate greed (like the GM workers who concluded their strike at the end of October). There are millions of people who could be drawn into action if there was a real opportunity to get rid of Trump and Trumpism and replace it with an inspiring left-wing alternative.