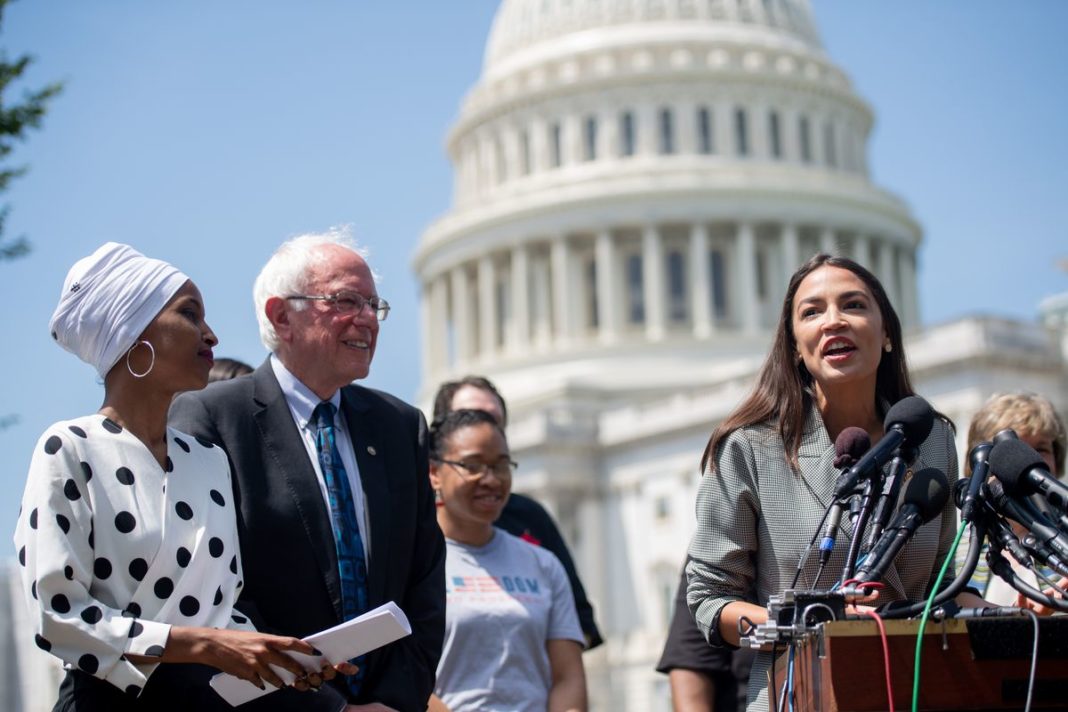 October 16 was an important night for Bernie Sanders’ presidential campaign. His performance at the fourth Democratic Party primary debate showed the continued fire behind his campaign. In a moment that has since gone viral, he defended his recent statement that “billionaires should not exist” by pointing to the unthinkable reality that three men own more wealth than the bottom half of the U.S. population.

Following this debate, news broke that Alexandria Ocasio-Cortez, Ilhan Omar, and Rashida Tlaib, the three young progressive congresswomen who — alongside Ayanna Pressley who has not endorsed Sanders — make up “the squad,” planned to endorse his campaign for president. These endorsements come as the corporate media and Democratic Party establishment have ramped up their campaign to sideline him in the race and anoint Elizabeth Warren and Joe Biden the two front runners.

While it is understandable that Bernie’s recent heart attack would worry his supporters who fear that his age is a liability, these endorsements will almost certainly give those supporters a renewed faith in the youthfulness of his campaign. A key component of Ilhan Omar’s endorsement of Bernie Sanders was that she sees him as the best candidate to defeat Trump, a point we’ve been raising all along.

Equally as important as their endorsement of Sanders is the fact that they chose not to endorse Elizabeth Warren. It is key to draw out what it signifies for the Democratic Party that the three most prominent Congressional freshman, who have found themselves consistently at odds with Nancy Pelosi and the party’s establishment, are throwing their weight behind Sanders and not Warren. While attempts have been made to blur the lines between Sanders and Warren over the past number of months, Bernie has recently made clear that there are key differences between the two of them. In an interview on ABC when asked about the differences between himself and Elizabeth Warren he said: “[Warren] has said that she is a capitalist through her bones. I’m not.” We wrote an article in July that details what we see as the key differences between the two both in terms of their ideas and their strategy to win. Bernie Sanders’ program has developed an even more radical character than it had in 2016 with his support for universal rent control, dramatically increasing union representation in the U.S., and wiping out student debt.

The endorsements of 3/4 of “the squad” represent the conflict that has embroiled the Democratic Party since the 2016 presidential primaries. It’s a conflict between the millions of ordinary people who have been radicalized by Sanders’ unapologetic, working-class program — which calls for cancelling student debt, a green new deal, and taxing the rich — and the party’s establishment which holds all the formal levers of power in the party.

The alliance between Sanders and Alexandria Ocasio-Cortez represents a tremendous threat to the billionaire class and their representatives in both parties. If they were to use their offices as a megaphone for social movements and fulfill their roles as “organizers in chief” they could galvanize millions of people into struggle against inequality and oppression. However, trying to achieve this within the Democratic Party will mean facing down the full weight of the party’s establishment and apparatus at every stage which will be a huge barrier to winning their program.

If Bernie Sanders and AOC are serious about winning their program to urgently shift the balance of power in society, they should use their alliance to lay the basis for a new party in the United States that has the active participation of ordinary people, has a bold, working-class program, and is rooted in building social movements. A force like this could be wielded to truly bring the billionaire class and big business to their knees.