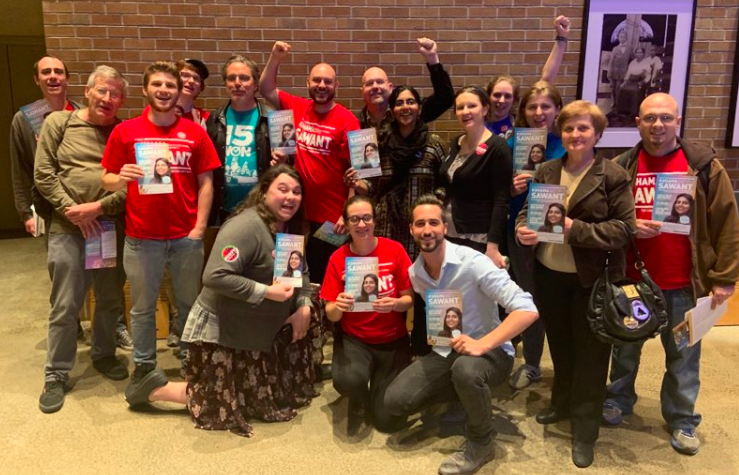 In a major upset against Seattle’s political establishment, the local Democratic Party voted to officially endorse independent socialist Kshama Sawant for City Council. With 70% of the vote at their September 17 monthly meeting, the membership of the 43rd Legislative District (LD) Democratic Party made history, becoming the first LD in Seattle to endorse an independent socialist.

The 43rd LD Democrats also endorsed Shaun Scott, a member of the Democratic Socialists of America, for the District 4 City Council race. Like Kshama, Shaun Scott is running a tough race against a Chamber of Commerce backed candidate.

“We made history tonight,” said 43rd leader Amy Madden, who helped lead the effort to win endorsements for Sawant and Scott. “Kshama has long-standing relationships with environmental, housing justice, and other organizers within the 43rd Democrats. She has fought beside us, from the campaign to divest the city from fossil fuel industry, to the fight for 15, to passing landmark renters rights legislation.”

These victories in the 43rd LD came just days after the King County Young Democrats also endorsed Sawant and Scott, and a week after 59% of the 37th LD Democrats voted for “No Endorsement,” which was universally seen as a pro-Sawant as the 37th LD bylaws don’t allow the formal endorsement of independent candidates. Following the lead of their smaller Legislative District organizations, the King County Democrats voted unanimously for “No Endorsement” on September 24.

Scott Alspach, the Chair of the 43rd LD Democrats, explained: “Our members know that Councilmember Sawant is a strong advocate for workers, renters, and marginalized communities throughout Seattle. With the vote tonight our membership made it very clear that we care more about the values a candidate holds than the labels they use.”

Nearly $2 million in corporate PAC money has been raised to back big business candidates in all seven Seattle City Council seats up for election this year, shattering previous records. In the face of this slate of Chamber of Commerce candidates, Socialist Alternative and Kshama Sawant have emphasized the need for a united response by progressives, labor, Democrats, and socialists.

While a majority of Democratic politicians refuse to break ties with big business, most rank-and-file Democrats oppose unlimited corporate spending on elections. “The scale of corporate PAC money spending against progressive candidates in this election points to just how effective our progressive coalition has been in recent years,” continued Amy Madden. “We’re going to continue to build a more inclusive, compassionate city, if Democrats, socialists, labor, and other progressives stick together.”

Class Divisions in the Democratic Party

These endorsements for socialists in Seattle, alongside more progressive Democrats like Tammy Morales in other council races, highlight the widespread support for progressive and socialist ideas among rank-and-file Democrats who are frustrated by the pro-corporate leadership of the city’s political establishment. This is mirrored nationally with the left-ward shift of the primary debates and the ongoing popularity of the democratic socialist presidential campaign of Bernie Sanders and the election of socialist U.S. Congresswoman Alexandria Ocasio-Cortez.

At base, these divisions within the Democrats reflect the deepening class inequality and polarization in U.S. society. Amid stagnant or falling living standards, working and middle-class voters are becoming increasingly alienated by the Democratic Party’s close ties and funding from big business, from Wall Street to tech giants like Amazon and Facebook. The popularity of Sanders’ 2016 call for a “political revolution against the billionaire class” opened a new era of escalating class tensions within the Democratic Party, which ultimately points toward the need for a new party that fights 100% on the side of working people.

In Washington State’s 2016 Democratic caucuses, Sanders won with 73% of the vote against Clinton, and more Seattlites donated to Sanders per capita than any other city in the country. Emboldened and organized through Bernie’s 2016 campaign and other left challenges, left-wing activists have fought to win leadership of local Democratic Party organizations.

More progressive party activists won local leadership positions, especially in the 43rd LD Democrats which includes a high density of renters and the younger neighborhoods of Capitol Hill and the University District. These political shifts were a part of the background to the resounding endorsements for both Sawant and Scott.

This process of political polarization is also reflected in the growth of the Democratic Socialists of America, who now have over 60 members in elected office across the country – some of those running independently but most on the Democratic Party’s ballot line. In Seattle and nationally, most DSA members are not members of local Democratic Party organizations. However, alongside the big influence of Socialist Alternative in Seattle, DSA’s growth has also impacted local Democratic politics.

Following Sawant’s first re-election in 2015, the 2017 Seattle elections saw two strong left independent campaigns; Nikkita Oliver ran for mayor as a Peoples Party candidate and Jon Grant’s ran for city council as a DSA-backed independent socialist. While neither won their races, they had a big impact and built significant grassroots support including among local Democrats. The growing support for left independent candidates contributed to a sharp debate in the 43rd Democratic LD over changing their bylaws to allow the formal endorsement of non-Democrats. Strongly opposed by party loyalists, this bylaws change in 2018 paved the way for this year’s history-making endorsement.

Can the Democrats be Transformed?

In the face of unprecedented Amazon-led corporate PAC spending, Kshama spoke to the 43rd Democrats on September 17th to ask for their endorsement: “Now more than ever, we need to unify working people, Democrats, socialists, and the labor movement against big businesses attempt to buy City Hall – but also to offer a positive vision: for a Green New Deal, rent control, taxing big business to massively expand social housing, and to fight for a city that works for ordinary people.”

Any genuine united front effort, however, requires being honest about political disagreements while raising them in a proportional and constructive way to bring movements forward. Sawant’s endorsement is remarkable precisely because she and Socialist Alternative have made clear that we don’t believe the Democratic Party can be transformed into a genuine people’s party, and we’ve consistently argued for building a new mass party of working people.

While it’s sometimes possible for progressive activists to win leadership of local party organizations, the real levers of political power at the higher levels of the Democratic Party are not decided by genuine democratic structures. Even where pressure from grassroots activists has succeeded in winning progressive platform positions – like for a federal $15 an hour minimum wage – there are no mechanisms for party members to hold elected leaders accountable to those decisions. In practice, most Democratic members of congress are far more accountable to their wealthy campaign contributors than to their party’s platform.

Socialist Alternative will continue to back left-wing and socialist campaigns like AOC’s to unseat corporate Democrats, but as Bernie supporters witnessed in the 2016 primary, the whole primary system is stacked against left insurgent campaigns. Even if a movement strong enough to seriously threaten big business rule were to develop, the corporate Democrats would sooner split the party themselves than allow their party to be seized by working-class people.

As famed author of The New Jim Crow, Michelle Alexander, put it after watching the DNC rig the 2016 primaries against Bernie: “I hold little hope that a political revolution will occur within the Democratic Party without a sustained outside movement forcing truly transformational change. I am inclined to believe that it would be easier to build a new party than to save the Democratic Party from itself.”

Socialist Alternative will continue to work in solidarity with progressive activists and socialists fighting to challenge corporate Democrats from within and win real change for working and oppressed people. At the same time, in Seattle and nationally, we think there is a burning need to build a real mass party for working people, equipped with a socialist program, and a strategy to mobilize powerful social and labor struggles that can transform society.