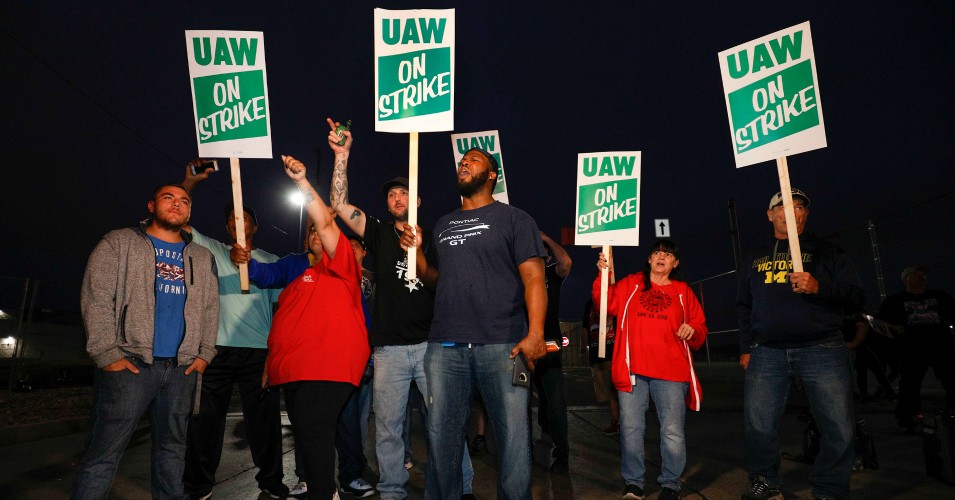 The strike of 50,000 UAW members which began Sunday at midnight at all 55 GM plants in the U.S. has the potential to mark a new stage in the revival of working class action. Teachers, hotel workers, and others made 2018 see more days of strike action than any year since 1986. This was followed by the 11 day strike of 30,000 New England grocery workers in in April 2019. Other battles loom, for example the Chicago Teachers Union and an SEIU local representing ancillary school employees are preparing for strike action this fall, and 47,000 Southern California grocery workers’ strike threat forced the employers to back down on their planned attacks on health care and pensions earlier this month.

Less widely reported was the victorious strike of 20,000 AT&T workers across nine Southern states and Puerto Rico, who after four days out made gains on pay, pensions and job security.

Polls show public support for unions at a 15 year high of 62%.

Socialist Alternative members in Michigan, Pennsylvania, and Wisconsin talked to UAW members as the picket lines went up at GM plants. What we found at the factory gates was a deep anger at the arrogance and deceit of the company, which came to their union with a begging bowl in 2007 pleading financial difficulties – well before the 2008 recession – getting big but supposedly temporary concessions which the company has since refused to give back. These included half-pay for new hires as well as letting the company hire three different categories of low-paid temporary workers and also allowing contractual workers employed by outside companies to work in GM factories.

All of these different, lower-paid tiers come with reduced or nonexistent pensions, severely limited or no health care, and limited or no sick and vacation time. Despite these concession and a massive $50 billion government bailout two years later, the subsequent 2015 contract produced no return to pre-recession pay and benefits. Today, workers understand that they were flat-out lied to. Full time workers on the picket lines expressed strong solidarity with their temping co-workers, knowing that temp work has proven to have no expiration date and calling for a defined, short, path from temp work to permanent status with full pay and benefits. Everyone understands that you can’t raise a family on temp pay with no benefits, and that the existence of temp workers in the contract threatens the job security of everyone. The feeling is overwhelming that the UAW sacrificed to bring GM back to life, and that it’s time for GM to give back to the workers, all of the workers, now that it’s profitable.

At the bargaining table GM has now offered to invest more than $7 billion in plant improvements in the United States, allegedly adding 5,400 jobs, but this rings completely hollow in the wake of multiple factory closures. Putting it in writing won’t make it any more believable because the union is already suing over the current round of closures which violate the existing contract language. Workers know that the company has already moved production of the Chevy Cruze and the newly-revamped, and highly profitable, Chevy Blazer to Mexico rather than pay U.S. workers their negotiated pay and benefits.

What this strike, and its motivation, potentially represent is a break with almost 40 years of concessionary bargaining. Since the Chrysler bailout in 1979, workers have been promised that if we give a little now, things will get better in the future. Beginning with the Reagan recession two years later, givebacks on pay and working conditions became the “pattern bargaining” of an entire era.

When the GM contract came up in 1982 the UAW leadership had already accepted the logic of concessions to preserve corporate viability, and therefore (so they believed) their members’ jobs. That contract saw the first acceptance of a lower pay scale for new hires.

This strategy has never worked. The record shows that since that moment, GM has gone from 440,000 unionized employees in the U.S. to the present figure of just under 50,000. In 2018, GM reported $10.8 billion in U.S. profits but announced the shutting down of five North American plants – four in the U.S. – including the historic Lordstown assembly plant. Lordstown was closed despite the over $100 million in annual concessions that workers were told would save it. GM continues to make Lordstown’s last product line, the Chevy Cruze, in Mexico.

During the same period GM has been one of the top corporate recipients of tax breaks and subsidies from all levels of government and workers’ pay has crashed. In 2007, when the UAW agreed to allow new hires to be taken on at half of the existing pay scale, this $14 hourly rate was lower in dollar amounts, let alone buying power, than any wage that the union had agreed to in a generation. Pay for assembly workers in 1961 was just under $19 an hour (in 2011 dollars) and was reached within 30 days of the date of hire.

This strike coincides with new revelations in a long-brewing UAW corruption scandal that has now seen the present, and previous, International Presidents of the union having their homes searched by Federal agents.

Workers on the line understand that this doesn’t change the fact that the union is essential to protect against corporate greed. Instead, they’ve told us that see it as a “black eye” that they will need to fight even harder to make up for. But it was the strategy of labor-management cooperation, going back many decades, that undermined the UAW’s traditions as a democratic, fighting union, and created a bureaucratic layer of “jointness” administrators without experience in running strikes. This may explain the union’s unfortunate decision, after previously lining up the contract for GM’s janitors to enable simultaneous strike action on Saturday night, to instead call the janitors out one day earlier than the production workers, calling for the production workers to cross their fellow workers’ picket lines until their strike began 24 hours later.

On the other hand, the company’s hardball decision to cut off workers’ health care the day after the strike began, has been responded to by the union’s picking up these payments so that there will be no break in coverage.  This was the right decision and it also makes it crystal clear that the labor movement needs to get behind Bernie Sanders’ Medicare for All proposal, which would take healthcare off the bargaining table once and for all.

What is needed is for UAW leadership to take a bold, confident approach which would raise the living standards of its members and re-organize outsourced suppliers, creating a solid basis for organizing the foreign-label plants whose low pay and unrestricted speed-ups have undercut the union’s power. The narrow loss at VW in Chattanooga despite a campaign which was rightly criticized for its shallow reach and poor organization, demonstrates the hunger that exists for union rights that can really protect workers and raise their living standards.

The union also needs to urgently reconsider the traditional strategy of striking only one of the Big Three automakers at one time. This strategy, known as “pattern bargaining” was used originally to hit the most vulnerable of the Big Three, come to an agreement, and then go to the other two demanding the same wages and conditions. But in the era of concessions, this has been reversed – every time a company has come to the union for help to stave off bankruptcy, the concessions given by the union have become the pattern for the other automakers. The UAW’s strike fund stands at a reported $800 million. It could be deployed to strike all three U.S.-based auto makers simultaneously, in a move which would reverberate throughout the entire economy as a massive demonstration of labor’s strength and power.

One factor fueling workers’ anger is the corporations’ use of their record profits not to invest in new or retooled factories but to pay their investors and top executives massive sums via stock buy-backs. This refusal to invest in new technology is a source of the long term decline of U.S. manufacturing versus its European and Asian competitors.

There is an urgent need for new technology such as electric vehicles and rebuilt mass transit systems to deal with the crisis of climate change. The Big Three automakers have all signaled their intent to outsource these things to non-union “start-up” corporations in yet another move in their endless shell game to undermine working-class living standards.

There are unions nationally which advocate strong action on climate change such as Amalgamated Transit Union, Communication Workers of America, and National Nurses United, as well as locals of many other unions, including in the building trades. The UAW should join these unions in actively mobilizing support for a workers’ Green New Deal, which has the potential to create millions of new jobs. It is the fossil fuel bosses who must be left in the dust, not the workers who have a key strategic role in fighting for this industrial transition.

A bold vision for the use of new technology to create new jobs and extend union pay and benefits to broader layers of workers than at any time since the “Rust Belt” decline of the 1970’s can make this strike a turning point for the U.S. labor movement.