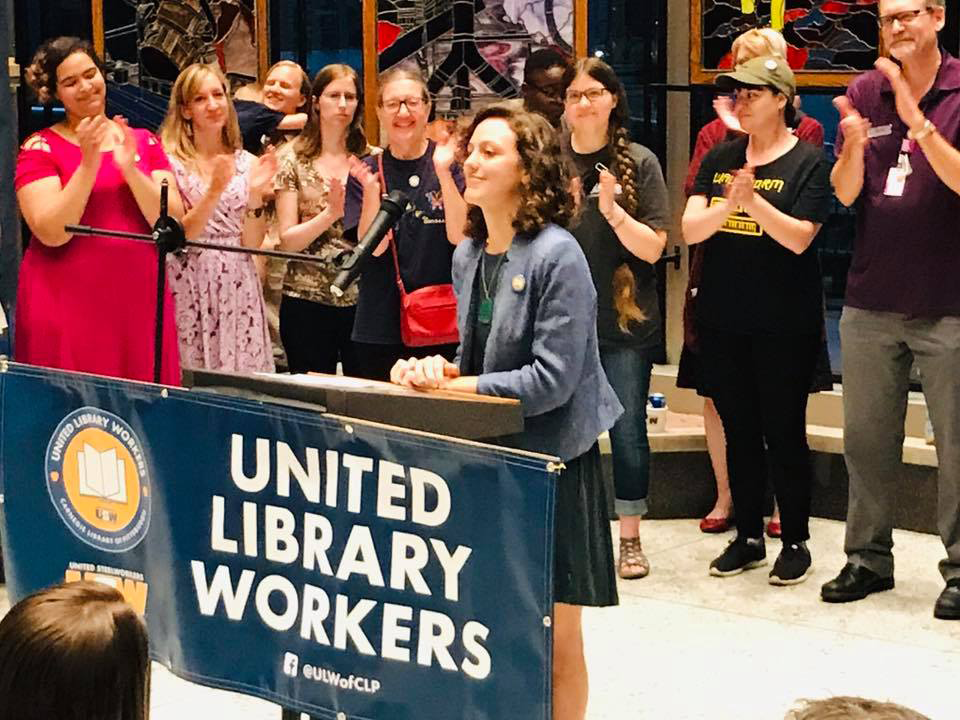 Library workers in Pittsburgh are engaged in a campaign to unionize their workplace and are headed to a systemwide union election on August 14. In June, workers organized a kickoff event to take the campaign public and begin collecting authorization cards, which they succeeded in doing from an overwhelming majority of workers. The event can be characterized in one word: electric. The United Steelworkers headquarters in downtown Pittsburgh was packed with over 200 people – community supporters, workers from the Teamsters and SEIU, Steelworkers, and teachers and librarians from the Pittsburgh Federation of Teachers, coming out in solidarity with library workers organizing for a better workplace. The hall thundered with union chants and cheers in support of the union drive, and waves of applause cascaded as workers confidently dropped their union authorization cards into the handmade “book drop” painted and decorated by committee members.

Several library workers prepared speeches to share their support. A part-time librarian with no sick time or paid time off and a young child at home shared, “I have my dream job – I help everyday people achieve their goals – and I shouldn’t have to suffer to do my best for them.”

Unionizing to demand improved working conditions and benefits is the natural solution for workers at the Carnegie Library of Pittsburgh: “If you’ve ever talked with a library worker, you know that we like to solve problems. Understanding how systems work and finding ways to make them more cost effective, equitable and humane is what drives each and every one of us. We have the expertise and will to make the library better, but we can’t do our best work without a contract.”

Library workers are organizing to win a living wage for workers, a stronger voice in the use of library resources and decision-making, to address the lack of diversity in their workplace, and to win benefits for part-time workers, who make up a third of employees but currently have no paid time off, sick leave, or employer-provided health insurance. The drive developed rapidly and gained strong support throughout the system because of these shared struggles, and a shared determination to demand change.

Across the country, many library systems are unionized as part of their city or county systems. Through research into the contracts of comparable library systems that are unionized, the union drive has found unsurprising data which points to an undeniable truth – library workers in unionized systems make more money with better benefits and more power in decision-making across the board.

The custodial workers at CLP are already affiliated with the SEIU, and the drivers who move materials between branches voted in late 2018 to affiliate with the Teamsters. Considering the strong union presence in the system, there is a sense that it is well past due for the library workers to organize and use collective bargaining to win a fair contract.

The Carnegie Library of Pittsburgh (CLP) – which includes 19 neighborhood branches and a support center which processes and ships material across the county –  is classified as a non-profit rather than part of the city or county government like many of those other library systems, and therefore did not unionize in the 1960s or 1970s where there was a large push for unionization in public-sector workplaces.

In 2011, funding for the non-profit was scarce, and residents of Pittsburgh voted on a referendum to divert a percentage of real-estate taxes to the library. While the passage of this tax showed the commitment of Pittsburgh residents to maintaining quality library services to the public, the funding of libraries and other social services is something that should be paid for through taxes on the rich, not on ordinary working class homeowners. This referendum also could have been strengthened by offering community members and workers a democratic say in how the budget is planned, and how that funding is distributed. Additionally, without transparency and accountability to Pittsburghers, the Board and administrators continue to make choices against the best interest of their employees and the community.

Libraries provide a vital public service, and they are increasingly filling in the gaps left by funding cuts to social services. The rising cost of daycare and after school programs leave working-class parents turning to the library as an option for free child care. Library workers see the desperation with which many Americans fill out applications for jobs and housing, and assist with accessing food and medical assistance programs. The opioid crisis which is ravaging the Appalachian region in which Allegheny County sits is often felt firsthand by library workers encountering people struggling with addiction in the libraries. Library workers are not trained or licensed as social workers, but often provide this function for patrons experiencing the backlash of decades of neoliberal policies that have chipped away at the quality of life for a majority of Americans.

CLP has spent years using smoke-and-mirror tactics such as staff surveys, info sessions, and all-staff discussion meetings to maintain the appearance of an inclusive leadership that listens to workers. In turn, for years, workers have bemoaned these superficial processes, understanding through their work experience that these tactics are nothing more than an attempt to appease and quiet the workforce who ultimately have little say in how the library is run.

Because the library workers have this culture of disillusionment and lack of trust in the administrators, it begs the question, why now? Why organize a union and seek power in the workplace that has never been offered, at a workplace with many employees who have worked for the same employer for decades? The lessons of the resurging American labor movement certainly have a hand in this newfound optimism for a chance to build power based on the demands of the majority. The strength and momentum of this campaign is not surprising following the wave of teachers strikes across the country, fighting for similar issues: demanding increased staffing, better conditions and resources for the population they serve, and benefits and pay that allow for a stable lifestyle in our increasingly expensive cities.

Who funds the library, and has a say in how it is run, is a relevant question in 2019. The city of Pittsburgh would benefit from having CLP be a municipally-run library system like most other major cities have, and would allow more democratic control and oversight of how the institution is run. However, local governments are still dominated in large part by corporate and financial interests, who we see refusing to pay their fair share in funding necessary social services for the benefit of everyone. For example, the Pittsburgh-based medical behemoth UPMC continues to report billions in operating revenues with top executives earning millions, but its non-profit status means it doesn’t have to pay the real-estate tax, thus contributing nothing to the library. Ultimately, what is needed is full democratic public ownership and control over the economy and all aspects of society, including our libraries.

As we continue to see corporations amassing wealth, it is all the more necessary that workers take this step to organize themselves into unions, and build the groundwork for coordinated action to defend against the attacks on our social services and the attacks to our health-care coverage, retirement benefits, and workplace conditions that we see across the country.

Send messages of support and solidarity to sapghbc@gmail.com.

Solidarity with the IATSE Rank and File!

1999 Carpenters’ Wildcat Strike: What We Won and How

Kshama Sawant: Solidarity with Union Carpenters in Their Fight For a Good Contract!