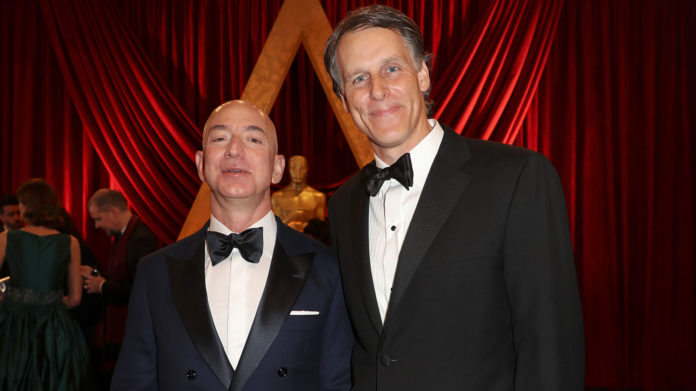 Amazon’s top executives have something in common with Vulcan, Comcast, Puget Sound Energy, and the Amazon corporation itself: they are afraid of Kshama Sawant.

One of our opponents’ donor lists reads like a who’s who of Amazon’s top players, with big donations from over 15 of Amazon’s top executives. Over half of these executives are members of the male-dominated “S Team,” Jeff Bezos’ closest advisors.

What’s at stake in this election is who runs Seattle — Amazon and big business or working people. Amazon hates that we stood up to their corporate blackmail last year. They were terrified by how close we came to winning last year’s Tax Amazon struggle, and they are afraid of how our movement will continue to grow if we win this re-election campaign.

We only have 2 days left until our July fundraising deadline, the last big deadline before the August 6 primary. Don’t let Amazon buy this election! Please donate $50 today — 10 donations from working people like yourself will cancel out a max donation from an Amazon executive.

While Amazon executives may be picking favorites, their top priority this election year is “anybody but Kshama Sawant” for Seattle’s District 3 seat — that’s why they’re hedging their bets.

For instance, Senior Vice President David Zapolsky, who oversees policy at Amazon, realizes that the best policy for Amazon is to protect Seattle’s regressive tax policy, so that Amazon can continue raking in record-breaking profits as Seattle’s homeless population grows. Top Amazon executive Zapolsky has given maxed out donations to both Zachary DeWolf and Egan Orion, as well as $5,000 to the “People for Seattle PAC.”

Headed up by former corporate City Councilmember Tim Burgess, the People for Seattle PAC is sending out a flood of mailer attacks against us. We’re not the least bit surprised. Big business leaders are determined to buy this election because they are frustrated at the gains our movements have won for working people. And now the gloves have come off — as The Stranger reporter Rich Smith writes, “Honestly, I’m glad to see divisive mailers created by a politician who calls for the end of divisiveness in politics. The open hypocrisy is refreshing.”

Our opponents often say that they will “listen to everyone in the district.” Some of these multimillionaire Amazon executives live within the boundaries of Seattle’s District 3, but Councilmember Kshama Sawant doesn’t represent them.

Councilmember Kshama Sawant unambiguously represents working people like the Amazon workers who are standing up to Jeff Bezos to demand real climate action and the Amazon security officers who fought for, and won, their union (and we’re proud to have the endorsement of SEIU Local 6!). Kshama represents renters who are struggling to afford Seattle’s sky-high rents, and who are joining our movement for rent control. And Kshama represents all the working people who are burdened by Seattle’s regressive taxes and underfunded public services, and who are fighting to tax Amazon and Seattle’s biggest business.

That’s why our campaign is not for sale to Amazon executives, corporate PACs, business lobbyists, or big developers. We’re incredibly proud that our grassroots fundraising has already cancelled out Amazon’s big $200,000 donation from earlier this year. But we know that the corporate cash will only continue to flood in.

Don’t let Amazon buy this election: please donate today to cancel out a max donation from an Amazon executive before our fundraising deadline tomorrow.