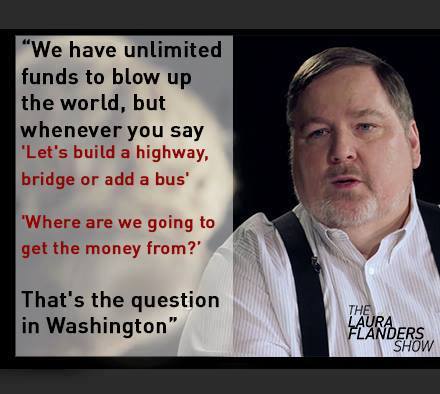 Socialist Alternative deeply regrets the passing of Larry Hanley, President of the Amalgamated Transit Workers Union (ATU), on May 7, 2019.

As readers may know, the ATU under Larry Hanley’s leadership took courageous stands on many issues. For one, it called for urgent steps to halt climate change, against other leaders in the “House of Labor” who strongly disagreed and who to this day are siding with the oil, gas, and construction industries to criminalize dissent. But Larry had a long and outstanding history of promoting public services through building alliances between union members and the wider working class, and of refusing to be intimidated by others who failed in this task.

Under Hanley’s leadership, the ATU was transformed into one of the fiercest and most progressive unions in the labor movement, aggressively advocating for more and better public transportation and fighting for social, racial and economic justice for all working people.

But despite the power of a union of 190,000 members that has the ability to shut down public transit, the job of organizing the 253 Locals across the United States into a movement-building culture, of involving riders and communities at every level, remains incomplete at the time of his death, and it remains to be seen whether those inspired by Hanley’s progressive vision will be able to maintain the leadership of ATU.

Hanley began driving a bus in 1978 in Brookly, NY as a member of the Transport Workers’ Union (TWU) Local 100. In 1979, priced out of Brooklyn by gentrification, his family moved to Staten Island and he became a member of ATU Local 726. On his first strike he became renowned for walking the picket line every day and night, but the existing leaders of Local 726 weren’t interested in developing a young leader like Larry, or allowing anyone to criticize their methods. After a series of incidents, including a beating by local union leadership that put him in the hospital, Larry fought back, building a rank-and-file caucus that saw him elected to be the Local’s Secretary-Treasurer in 1984 and President in 1987.

This was the Reagan era. Deregulation was destroying union jobs throughout the transportation industry. Every day, vast numbers of Staten Island residents went to work in Manhattan but excessive bus fares and slow, obsolete buses were driving passengers to use private coach companies instead.

“So we devised a plan to move buses out of Staten Island faster with express bus lanes. People would zip through Brooklyn in 10 minutes, for example, rather than be stuck in traffic for two hours.” The question was how to build political support. The local decided that instead of trying to lobby elected officials, they would build a movement.

After a few false starts the local built a coalition with riders through one on one contacts with commuters as they rode their buses. After politically convincing their members to contribute an extra, voluntary deduction to raise the necessary funds, the Local hired community college students to ride the buses with a three-postcard flyer: a postcard to the mayor, another to the governor and another was to the city council, calling on them to lower fares and create express bus routes to Manhattan. The Local mailed the postcards, at the same time building up a contact list of the riders who signed them. “We worked every day in the community to convince both our members and the passengers that our interests were one and the same.”

In 1998, they won all of their main demands: a new, improved express bus route from Staten Island to Brooklyn with reduced fares, new, bigger buses and a faster service that began earlier and ended later in the evening. The result was a 125% increase in ridership and 500 more bus drivers hired. The local’s investment of $160,000 on the campaign generated $450 million in new jobs and $1 billion in capital spending on transit. Union membership went from a low of 60% at the start of the campaign to around 98% by the early 2000’s.

Hanley also organized a multi-union effort that successfully elected 515 union members and officers to the Staten Island Democratic Party, helping elect Democrat David Dinkins as New York City mayor in 1989, the city’s first black mayor. In a sweeping disregard for their own rulebook, the State Democratic Party retroactively nullified the union-led takeover of the Staten Island party, and Dinkins, after betraying his base in organized labor, lost to right-wing Republican prosecutor Rudy Giuliani in 1993 but Hanley continued to seek political solutions, promoting the attempts of activists and a group of union leaders to build a Labor Party in the mid 1990s and playing an important role in launching the New York-based Working Families Party a few years later.

This led to Hanley’s hiring by the International Union as a field representative. As fellow ATU reformer and current International Vice President Bruce Hamilton has written, “Larry was a spectacular pain in the ass to the union leadership as well as to powerful interests in New York City that the ATU International didn’t want to disturb. He was appointed to the position of ATU International Representative possibly partly to get him out of town and turn the local over to someone less troublesome.”

The Struggle to Rebuild ATU

In his new position, Hanley traveled the East Coast and later the country tirelessly, developing new methods but constantly bumping up against the conservative leadership and their reliance on ineffective legal and political strategies. Mass transit has long been starved of funds by a Congress where the highway lobby receives the vast majority of federal transportation dollars, and which has also left unchanged a 1998 law that requires cities with populations above 200,000 to use their federal funds only for capital expenses and not for operations. In this as in almost every other area concerning workers’ needs and the environment, the Obama administration failed to deliver.

In 2010 Hanley ran for ATU President. “The real battles in coming years are going to be won by organizing the public, not by litigating before a judge, not by begging Congress,” Hanley told Labor Notes shortly before the October, 2010 ATU Convention. “We have to convince people that green jobs matter, and that transit is the greenest job you’re going to find.”  He was elected at the Convention, by a significant margin.

He immediately set to work to train new generations of activists in the methods he and his union sisters and brothers had pioneered in Staten Island. The first step envisioned was to bring ATU activists from key cities to a series of “boot camps” in the Washington, D.C. area where they would be trained in community organizing so they could use those skills back home to create local coalitions to pressure legislators to support mass transit. This produced significant victories – for example in right-to-work Atlanta, GA, and in St Louis, MO, where transit workers facing a blatantly racist bus company had gone for seven years without a contract, jobs, pensions and union rights have been preserved. Nationally, a Workstation Initiative was launched in 2017 that involves every local in the fight for safer bus designs and this is continuing.

In 2011 Hanley, newly elected President of the ATU and now on the AFL-CIO Executive Board, took on the conservative leaders of the Laborers, Teamsters, and other unions which, in order to win a relatively small number of jobs during construction of the Keystone pipeline, sided with the oil and gas corporations and against environmental concerns and the Water Protectors. Hanley was among the 1,200 protesters arrested while encircling the White House in September 2011, calling on President Obama to stop the Keystone XL pipeline: “We call instead for major ‘New Deal’-type public investments in infrastructure modernization and repair, energy conservation and climate protection a means of putting people to work.”

In 2016 the ATU Executive Board endorsed Bernie Sanders for President, urging its locals and members to become active in the Sanders campaign. In Larry Hanley’s words announcing the endorsement: “Our nation is crying out for a leader who owes nothing to the corporate interests responsible for undermining the American middle class.”

The way forward for labor means building movements that go beyond the immediate economic interests of “simple trade unionism.” In Larry’s words: “We don’t think we would be true to ourselves if we only tried to build alliances that would help us [in the short term].” Today the methods of community engagement that Larry pioneered are enormously relevant, and his passionate opposition to inequality and injustice continue to inspire  a new generation of activists. ATU and the labor movement more broadly need more leaders who can resist the pressures on union leaders to “play the game” and to go along with the agenda of big business. There is a real danger that under new leadership, ATU will give in to the pressure of big business, of the budget-cutters in the Democratic Party and of labor misleaders like the North American Building Trades Unions who have effectively endorsed Trump and the agenda of the oil and gas industry. We must, as Hanley did, forge a new strategy for labor that does not pit workers against the environment.