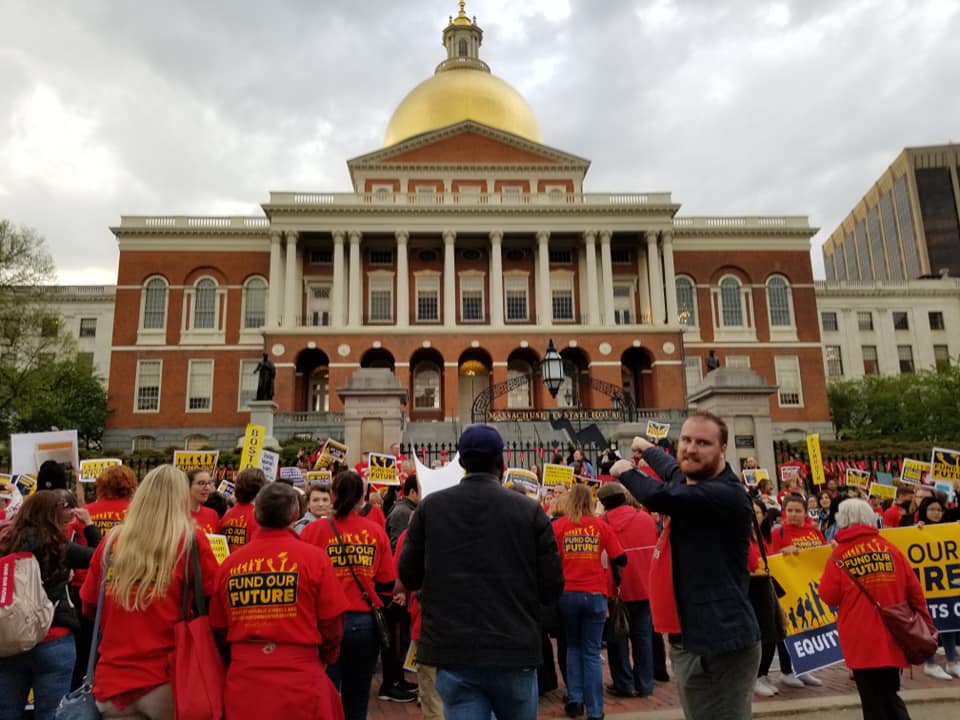 On May 16, educators across Massachusetts rallied after school in Boston and Springfield, calling on our state legislators to fully fund public education. The Massachusetts Teachers Association (MTA), with 110,000 members and around 400 locals, needs to use this momentum from the 16th to push Governor Baker’s state government, currently short-changing our public schools by over $1 billion each year in K-12 education (and by an additional $500 million in higher education), to fully fund our schools with no strings attached. The #RedForEd movement is spreading, and no matter which corporate party is in charge, students and teachers are fighting for fully-funded, high-quality education.

The MTA leadership is pursuing primarily legislative solutions by working heavily on the CHERISH and PROMISE acts (Massteacher.org) to fund our statewide education system. Legislation can act as a stop gap, but the march toward privatization will not end without educators, students, and communities demanding that our schools are prioritized above profits. The best way to fight back against Baker and the underfunding of our schools is to put forward bold demands and a call for educators, students, families, and communities to strike for the fully funded schools we need and deserve!

There is a growing sense among the MTA rank and file membership as well as in certain sections of the broader labor movement that striking is our most powerful weapon to win what we need. Nationally, we’ve seen the highest number of workdays lost due to work stoppages in the past year since 1986 (Bureau of Labor Statistics, 2019). This resurgence of the labor movement has been led by educators making bold calls for fully funded education and a stop to cuts and privatization across the board. Educators are now drawing inspiration from Stop & Shop workers, who recently held down picket lines across Massachusetts, Connecticut, and Rhode Island for 11 days to fight an onslaught of attacks from the company including harsh reductions in their benefits.

Statewide action is necessary, but the MTA must go one step farther by linking our fight for fully funded education in MA to similar struggles across the country, bringing the campaign to the NEA and other labor unions who will fight alongside our educators, students, and families. At the recent MTA annual membership meeting, we voted in a proposal to push the National Educators Association (NEA) to take strike action in support of the Green New Deal and environmental justice. This comes directly from our membership who are ready to stand alongside young people fighting for the very existence of our planet. This is precisely the orientation our unions need to be taking: bold calls for work stoppages, and linking up with our national union brothers and sisters.

Socialist Alternative calls on this MTA leadership – elected on the wave of excitement from the national teachers strikes in 2018 – to unleash the untapped potential of rank and file members to build a broad, working-class movement to fight the billionaires’ attacks and build for work stoppages and strike action next school year. Now is the time to draw a line in the history books – our students, communities, and educators must unite to fight against the privatization of our schools and for high quality, public education!