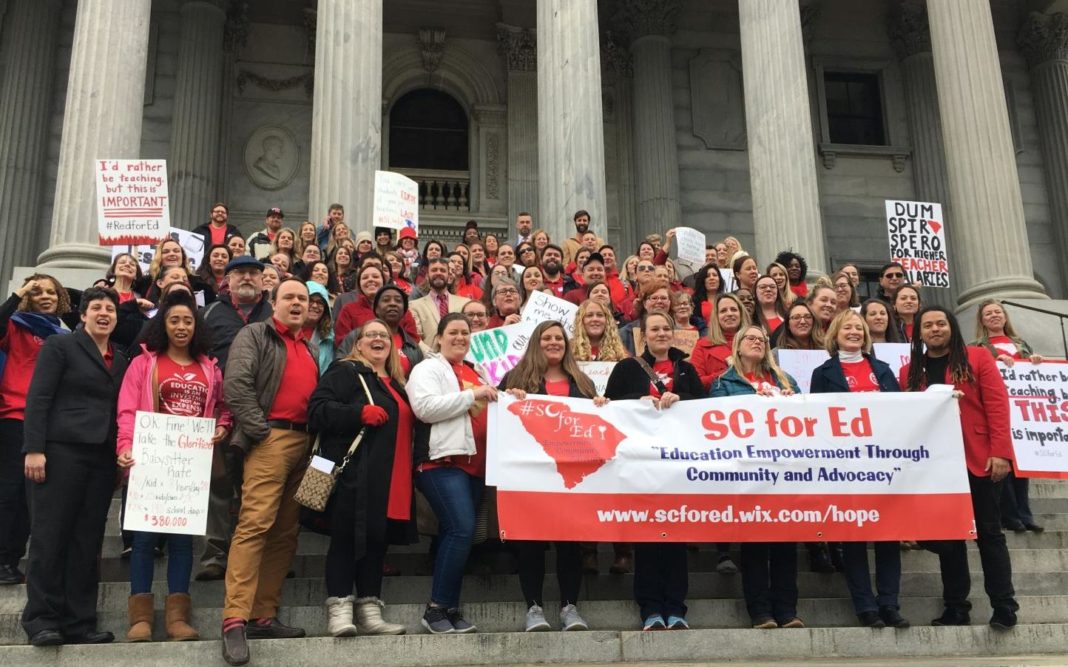 The education system in South Carolina is ranked #42 in the country (US News & World Report) and the median salary for all workers in the state is slightly over $32,000 a year, the 6th lowest in the country (USA Today). Teachers in South Carolina staged the walkout over more than just low wages, however. They brought forward issues like the lack of bathroom breaks during the day, and the under-funding of school programs.

At the same time in North Carolina, 34 school districts cancelled classes as teachers throughout the state protested at the state capitol in Raleigh for higher wages and, critically, for Medicaid expansion in North Carolina. Another important factor in the protest was that teachers at many charter schools joined in the walkouts, causing at least 10 charter schools to close on May 1st as well. This action in North Carolina shows how teachers in both the public and private sectors were able to recognize their shared concerns and needs, and by protesting on behalf of Medicaid expansion, also demonstrated that the issues they care about are not just limited to their classrooms but are also linked to broader issues like fixing our broken healthcare system.

In South Carolina, collective bargaining was made illegal for public sector workers by an anti-union, reactionary order from the State Supreme Court in 2000. This means that, while teachers can join a union, that union doesn’t have legal grounds to negotiate a contract directly with the state. This law makes South Carolina one of the most anti-union states in the U.S. and a very difficult place for teachers to assert their collective power.  In many states, including “blue states” like New York, while public sector workers have the right to collective bargaining, it is illegal for them to strike. These limitations can be circumvented if the union has the political will, community support, and rank-and-file strength to carry out a strike.

Under the particular conditions in South Carolina, mass sickouts and even “Red For Ed” actions (days on which teachers organize to all wear red) are important initial steps. During the May 1st protest, the teachers called in sick to attend the demonstration so as to avoid formally calling a “strike.” It is important to note that this day of action was organized by a rank-and-file educators’ group called SC for Ed rather than by the official union.

These continued labor actions by teachers are part of the inevitable reaction to the inequality and systemic shortcomings of capitalism to provide meaningful wages to teachers, who are some of our most critical workers,  or to adequately fund education for all students. Going forward, working class people all over the country will need to learn from the example set by our teachers and take up similar bold and unapologetic fights in our own workplaces.