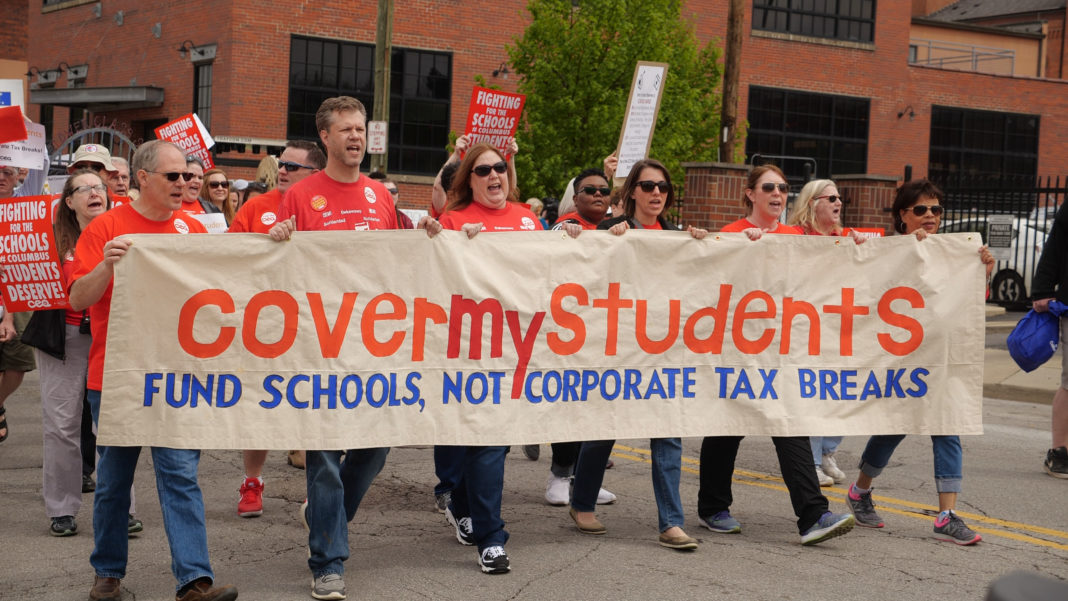 On Wednesday, April 24, more than a thousand teachers and community members in Columbus, Ohio marched together to fight for school funding and an end to corporate tax handouts. As part of their recently launched #ColumbusStudentsDeserve campaign to support their contract negotiations, teachers in the Columbus Education Association (CEA) are taking special aim at the millions of dollars that have been drained from our public schools in recent years by extravagant tax handouts to wealthy corporations.

After an extremely unpopular contract negotiated in 2017 that left teachers with only a 1.5% annual raise, the current newly-elected union leadership now has a mandate to more aggressively stand up to the school board.

In March 2018, John Coneglio became the first union president to defeat an incumbent in CEA history with a sweeping 55% victory to the incumbent’s 30%. After months of surveys and meetings with CEA members, the new union leadership kicked off school board negotiations this March by launching a set of demands that reflect the fighting mood among teachers nationally. Long negotiation meetings between the CEA bargaining team and the school board have only just begun and no offers have been made, but teachers have only until this summer break before the current 2017 contract expires.

At the spirited rally, teachers chanted “Pharma got handouts, kids got sold out!” This chant referenced CoverMyMeds, a Columbus-based corporation owned by the sixth most profitable corporation nationwide, which was recently granted a 100% 15-year tax abatement by Columbus City Council that could drain up to $55.6 million in tax revenue from the school district. Speaking from the back of a pick-up truck to the crowd of teachers gathered near the CoverMyMeds downtown skyscraper, the newly-elected CEA president John Coneglio spoke of the need to stop relying on working families footing the bill through constant tax levies and instead start to make the richest among us pay their fair share from their billion dollar coffers.

After marching to CoverMyMeds, where teachers delivered a past-due bill for funding, teachers made their way to Columbus City Hall. Pointing up to the City Hall building where the Columbus City Council meets, teachers speaking to the crowd invoked the role the all-Democrat Columbus City Council has played in willingly handing out tax abatements to corporations while ignoring the growing education and housing issues our community faces.

The campaign launched by the new union leadership includes demands for much-needed wage increases, but the CEA is even more focused on pushing back against the rampant corporate control that has led to years of cutbacks and underfunding that hurt students’ needs. Just as with the recent victorious Los Angeles and Oakland teachers strikes, Columbus teachers are fighting for smaller class sizes, funding for arts and music education, more nurses and counselors, expanded alternative discipline programs to address the school-to-prison pipeline, adequate compensation, and an end to giant tax handouts to wealthy corporations.

A math teacher at the march described the defunding of Columbus City Schools as a “slow burn.” Many teachers were laid off years ago, and teachers have had to adjust to the increased workload, larger class sizes, and lack of support. Library media specialists, for example, now have to juggle up to two middle schools and eleven elementary schools. The previous contract also allows classrooms to have up to 36 students in high schools, 35 in middle schools, and 29 in K-5 classrooms. In addition to layoffs, nearly one-third of full time educators hired since 2012 have left the district, and these positions are often eliminated rather than replaced. Under-staffing has become the new normal across the district and teachers have been forced to make do.

Nationally teachers face the same impact of budget cuts and shamefully low staffing levels. After ferocious attacks from corporate interests and politicians under the guise of “school reform”, it would now require 400,000 new educator positions nationally to return to 2008 staffing levels in public schools.

As the CEA bargaining team continues negotiations, now is the time to continue building momentum from outside the bargaining room to keep the pressure on the School Board and City Council. Planning for a larger rally, even a teacher walk-out, before the end of the school year, could help send a signal to the School Board and City Council that teachers, parents, and students are ready to continue fighting for the schools #ColumbusStudentsDeserve. It will be crucial to mobilize student and parent support for such a rally and for other unions to mobilize their members to show up and speak out in solidarity with the teachers.

In conversations with teachers at the march, many expressed that, while striking is a last resort, they are willing to do whatever it takes to come out of this contract battle with a victory. Organizing support now from parents and students and across the community will help continue to build pressure for the current ongoing negotiations but also can help prepare the wide community support that would be needed if teachers do decide that a strike is needed.

The national teachers’ revolt sparked last year through the courageous West Virginia teachers strike is clearly not over. Teachers’ victories around the country, including West Virginia, Los Angeles, and Oakland, show the power that teachers and the wider working class can wield to win the quality public education that students deserve.