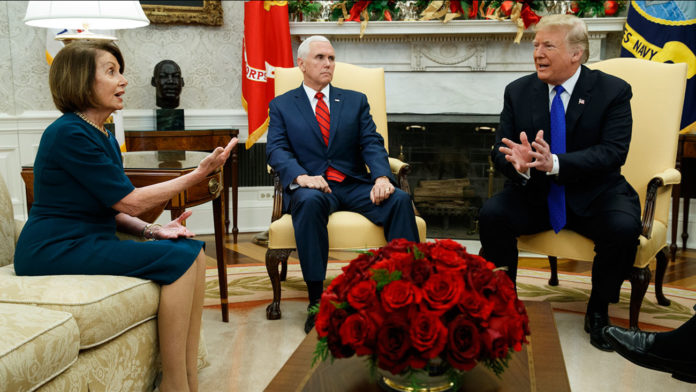 The Democratic Party leadership has claimed political victory in negotiations with Trump on border security in avoiding another government shutdown. Yet the figures tell a different story. Trump got a $1.4 billion, 55-mile down payment on his wall.

Democrats, in trying to look like the “adults in the room” by ensuring the functioning of the federal government, actually legitimized Trump’s contention that there’s a security crisis at the border for which the public purse must be pilfered. In a year when the cruelty of immigration enforcement and family separation had been laid bare, and voters rejected Trump’s racist and reactionary anti-immigrant policies at the voting booth, Democratic Party leaders ignored the mass sentiment and conceded.

The only crises that exist on the border are the thousands whose right of asylum is being ignored, the indigenous communities of the Rio Grande Valley which are being artificially split up, and the environmental damage caused by construction in the area. Refugees are fleeing politico-economic violence perpetrated, facilitated, or ignored by U.S. imperialism in its client states. The money being spent on “border security” is theft from the working class, poor, and oppressed on either side of the border.

This is not new. Last year, Democratic Party leaders were even prepared to give Trump all $25 billion that he needs to construct the full 1,000 mile-long “wall” in exchange for his support of the DREAM Act. The only thing that seems to have prevented that deal from going through was Trump’s arrogance of demanding a ton for every pound the Democrats gave.

At that time, the Democratic leadership was ready to strike a rotten compromise, but at least there was a tangible benefit of protecting the Dreamers. What did the Democratic Party secure this time around for immigrant rights that they claim to support? Practically nothing! Not the DREAM Act, not a renewal of Temporary Protected Status for refugees, nothing! All they managed to get was a tortured rhetorical victory because there’s no funding for a concrete 30-foot wall according to Trump’s precise specifications.

And now Trump has declared a National State of Emergency in order to redirect the rest of the funds he needs from the Department of Defense. Of course, that will be stuck in the courts and may never actually see the light of day. If taken up by the Supreme Court, there is a chance that the conservative majority could deliver a victory to Trump. Either way, Trump gets to justify himself to his hard-right base. Meanwhile, the virtually unchanged status quo of enforcement-only bipartisan policy on immigration continues, despite the Democrats’ professed desires for “comprehensive immigration reform” and Trump’s escalating harassment of immigrant communities.

Javier Valdes, co-executive director of Make the Road NY said “there’s been a national conversation about the role of ICE and detention, and folks expected we’d see something that actually decreased the level of detention and came with actual oversight. It’s not just about the wall. It’s the other enforcement mechanisms and the impact they’re having on our communities on a day-to-day basis” (The Intercept, 2/13/19).

Of course, a number of Democratic members of Congress have declared their support for the call to “abolish ICE” and in general the party states their opposition to Trump’s inhuman policies of separating families and detaining asylum seekers. But while it is clear that the party’s base and even a section of the elected officials are well to the left of the leadership, this makes the weakness of their position in the negotiations all the more striking. Even a number of mainstream news outlets are sharply criticizing the Democrats for the disastrous outcome in the negotiations. The Week, for instance, had an article titled “The Democrats’ total capitulation on the border“ and a CNN.com headline read: “In border deal, Democrats gave too much away.”

The bottom line is that Trump doesn’t have a serious opposition on immigration in Congress. We cannot rely on the Democratic Party to fight Trump’s racist anti-immigrant policies or any part of his bigoted and anti-working-class agenda. Mass protests, direct actions, and strikes need to be organized among workers, immigrant and native born. Immigrant rights organizations, Bernie Sanders, AOC, union leaders, socialists, and other major social movement organizations should call for these mass actions around the following demands: