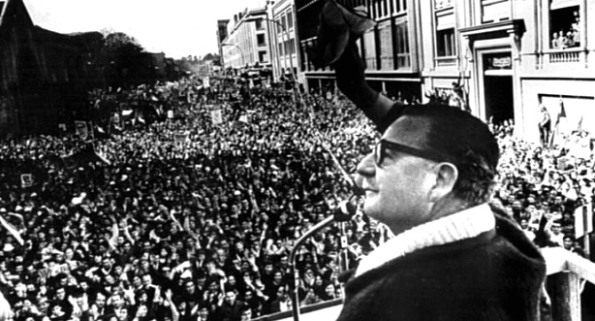 The United States has a 200-year-long history of intervening in Latin American politics to protect its geopolitical and economic interests. All of these invasions and interventions have been aimed at preventing radical or revolutionary movements from gaining or wielding political power that would set a “bad example” or restrict U.S. access to oil and other natural resources in these countries. Today, the U.S. is also competing with other imperialist powers, especially  China for influence in the region.

Both “soft” and “hard” interventions can have widespread devastating effects on the quality of life for people in targeted countries. U.S. Military intervention has caused tens of thousands of civilian deaths and decades-long military dictatorships that have inflicted trauma on a mass scale. From 1898 to 1989, the U.S. directly invaded: Cuba, the Dominican Republic, Haiti, Grenada, Guatemala, Puerto Rico, Mexico, Nicaragua, and Panama – some of them multiple times.

In 1970, Salvador Allende was elected president of Chile at the head of a mass movement of radicalized workers.  Allende promised to nationalize the country’s oil resources and reverse the policies of the existing U.S.-backed government that had resulted in low wages for most workers and an inability for domestic industry to compete with a flood of cheap U.S. goods into the country.

Despite decades of U.S. financial support for his opponents, Allende was elected with overwhelming support. President Nixon immediately gave the order to orchestrate his overthrow. Over the next three years, the CIA funded and armed officials within the Chilean military who were receptive to carrying out a coup against Allende.

Even more brutal interventions occurred in Central America in the 1980s in response to a growing wave of mass revolutionary movements opposing the impacts of U.S. economic and military interventions in the region. After a decade of brutal U.S. intervention and the collapse of the Soviet Union in 1989, participation in socialist movements and parties across the region declined over the ‘90s and early 2000s.

The election of self-described socialist Hugo Chavez in Venezuela in 1999 was a blow against U.S. economic and political dominance in the region. The U.S. government wasted no time in responding by helping organize and fund a coup attempt in 2002 by military forces loyal to the previous administration. However, the coup was unsuccessful. Chavez held office until his death in 2013 when Nicolas Maduro was elected as his successor.

The massive collapse in oil prices between 2014 and 2016 pushed Venezeula from economic hardship into economic crisis. Rather than offering aid to help the country recover, President Trump is imposing sanctions in an effort to starve the government of resources and hasten its collapse. This does nothing to help ordinary Venezuelans and instead reduces the ability of their government to provide relief to those suffering the most from the economic crisis.