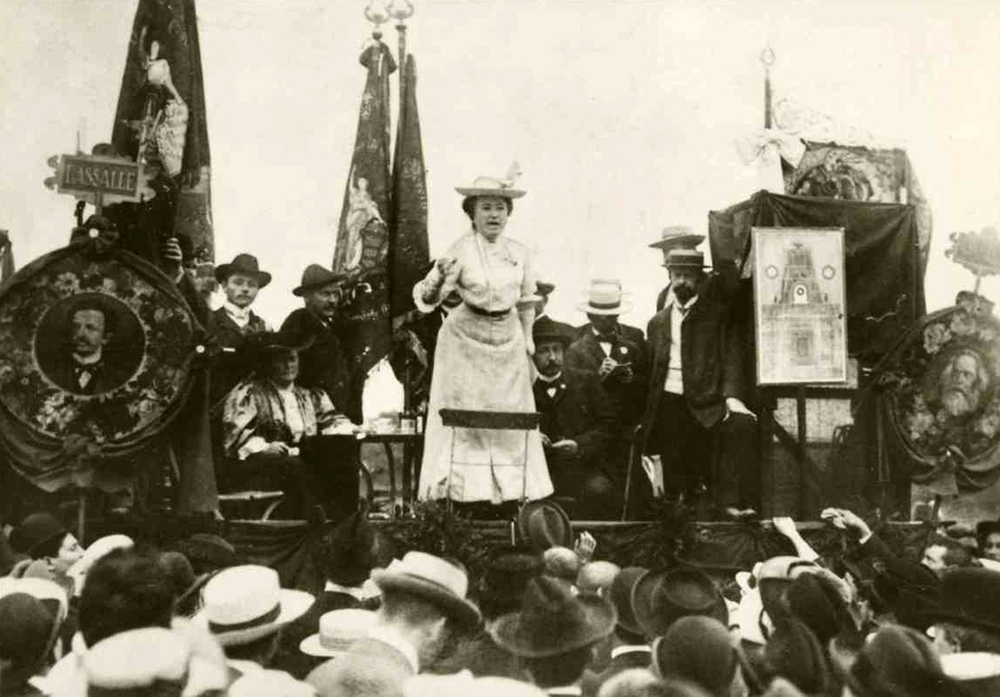 Rosa Luxemburg, a heroic and principled figure of the left, died 100 years ago this year. Rosa was a disabled Polish-German secular Jew, a woman jailed for her views, a poet and a migrant, but above all she was a Marxist political economist, theorist and leader whose works have sparked the imagination of socialists for over a century. Rosa made major contributions to the development of socialist parties, theorized the nature of mass resistance by the working class, and fought steadfastly against reformism and for a revolutionary rupture from capitalism. Her murder at the hands of the paramilitary “Freikorps,” ex-army soldiers aligned with the right-wing of the German Social Democratic Party (SPD), has made her a martyr for the socialist workers’ movement.

Rosa Luxemburg was born in Russian-ruled Poland in 1874, and immigrated to Switzerland as a teenager to avoid the czar’s persecution of political radicals. She received a doctorate in 1898 in law and political economy. While studying, she helped found the Polish Social Democratic Party. The party stood forthrightly for a workers’ led struggle for a socialist transformation of society.

In 1898, Rosa moved to Berlin to work with the largest and most powerful socialist party of the time, the German SPD. She quickly jumped into the “revisionist” controversy that divided the party. SPD leader Eduard Bernstein argued that socialism in industrialized countries like Germany could be achieved gradually, through strengthening trade unions and winning parliamentary elections.

Rosa wholly rejected Bernstein’s viewpoint. In her pamphlet “Reform or Revolution,” published only months after arriving in Berlin, she said Bernstein raised “the question of the petty bourgeois or proletarian character of the labor movement.” Would the SPD join the capitalist system, or work to overthrow it? She reinforced Marx’s case for revolutionary socialism by arguing that parliament is an institution of, by, and for the capitalist class. The interests of workers and bosses are fundamentally counterposed. The working class can only end its subjugation if it takes power and transforms the social, economic and political system – most notably by bringing the key sections of the economy into public ownership under workers’ control.

Furthermore, Rosa dismissed Bernstein’s exclusive focus on piecemeal reforms. Rosa said the fight for reforms had to be linked to the conscious effort to take political power. “Between social reforms and revolution there exists for the Social Democracy [socialism] an indissoluble tie. The struggle for reforms is its means; the social revolution, its aim,” she wrote. Revolutions became possible as the working class evolved in experience and consciousness, driven forward by changing social conditions and collective victories. Failing to fight for a revolution meant failure to emancipate the entire working class.

Indeed, the Russian Revolution of 1905 was a pivotal event shaping her outlook. Rosa returned to Russia-controlled Poland, participated in the struggle against the czar, and was imprisoned. Her experiences led her to write “The Mass Strike” in 1906, which propounded a theory of revolutionary mass action. Rosa viewed the mass strike – which could erupt spontaneously – as the single most important tool of the working class for winning a socialist victory. She correctly emphasized that it was the independent movement of the working class that powered revolutions, not “officials” warming seats in parliament or trade union bureaucracies.

Some have criticized Rosa for her belief that organization would naturally emerge from workers’ struggle, thereby de-emphasizing the need for a cohesive organization of revolutionaries. Her views certainly contrasted with Lenin’s construction of the Bolshevik Party which was based on a clear revolutionary program and combined a wide internal democracy with a high degree of centralized discipline. However, it is important to note that prior to the Bolsheviks, there had been no tight-knit revolutionary party that had successfully won a socialist revolution! Rosa’s ideas on organization were an obvious reaction to the increasingly nationalist and conservative ideas of the sclerotic SPD bureaucracy, which were epitomized in their tragic vote for World War I in 1914.

When Rosa was released from prison in 1907, she returned to Berlin to teach, write, and agitate. In response to the SPD’s vote for war in 1914, Rosa and her comrade Karl Liebknecht formed the anti-war, pro-worker Spartacus League. In this, she, Liebknecht, Lenin, Trotsky and others aligned in their fight for workers’ uprisings to end the war and bring about united socialist workers’ democracies. For these positions she was again jailed, this time by the German Kaiser.

The devastation of World War I, which included over 16 million people who died and another 20 million who were injured, rocked European nations. A year before the end of the war, the Russian czar fell at the hands of the revolutionary Bolsheviks, who were able to unite workers, farmers and soldiers into soviets, or self-governing workers councils. As German losses piled up in 1918, the Kaiser was forced to abdicate and an armistice ended the war. The SPD leader, Friedrich Ebert, became chancellor (prime minister) but revolutionary upheaval was already underway throughout Germany. A naval mutiny in Wilhelmshaven had spread to Kiel (both in the north of Germany) and then rolled onward. Soviets were springing up throughout German towns, cities, and ports.

The SPD government tried to control the situation by appeasing the revolutionary workers and soldiers. This took clear form when SPD leaders rejected the declaration of a socialist republic and instead called for new elections in January 1919. Their goal was to write a new constitution of a capitalist republic. But Rosa and Liebknecht, who had been released from jail in November 1918, were already underway agitating against the SPD leadership. They rallied the working class, especially in Berlin, who were frustrated that the old capitalist regime had not already been toppled.

Rosa was vilified in the bourgeois press as “Bloody Rosa,” who, like Lenin, demanded immediate political power for the workers’ and soldiers’ soviets. Realizing that the conservative social democratic establishment was irreparably compromised, in late December 1918, Rosa and Liebknecht founded the German Communist Party (KPD). They were spurred on by SPD leaders’ bloody suppression of the left and the desire among revolutionary workers to aid Soviet Russia by overthrowing German capitalism. Yet the broad masses of workers, over seven million of whom were in trade unions, still held illusions in the SPD. This tumultuous situation of revolution and counter-revolution unfolded at different speeds throughout Germany.

From January 9-12, on the orders of Ebert, the social democratic prime minister, regular forces and the paramilitary Freikorps successfully and bloodily suppressed the “Spartacist” uprising.

Isolated and under seige, the Spartacist leadership fell into the crosshairs of the SDP’s brutal crackdown. The Freikorps abducted Luxemburg and Liebknecht, murdered them, and threw their bodies into the Landwehr Canal.

There is no doubt that the heroic life of Rosa Luxemburg remains full of lessons for the working class today. Her contributions would have been impressive enough if she had only bravely defended Marxism against reformism or theorized the power of the mass strike. But she went further, inspired by the Bolshevik’s program of “All Power to the Soviets,” to launch the KPD as a tool for fighting the German revolution. For all of this to have been achieved by a woman – in an age of women’s formal political exclusion – is truly remarkable.

In the words of Lenin, “In spite of her mistakes she was – and remains for us – an eagle.” Radical workers and young people should say the same today in our struggle for socialism. With mass inequality, political turmoil and climate crisis gripping our planet, Rosa’s words from 1916 ring just as true today: “Bourgeois society stands at the crossroads: either transition to socialism or regression into barbarism.”