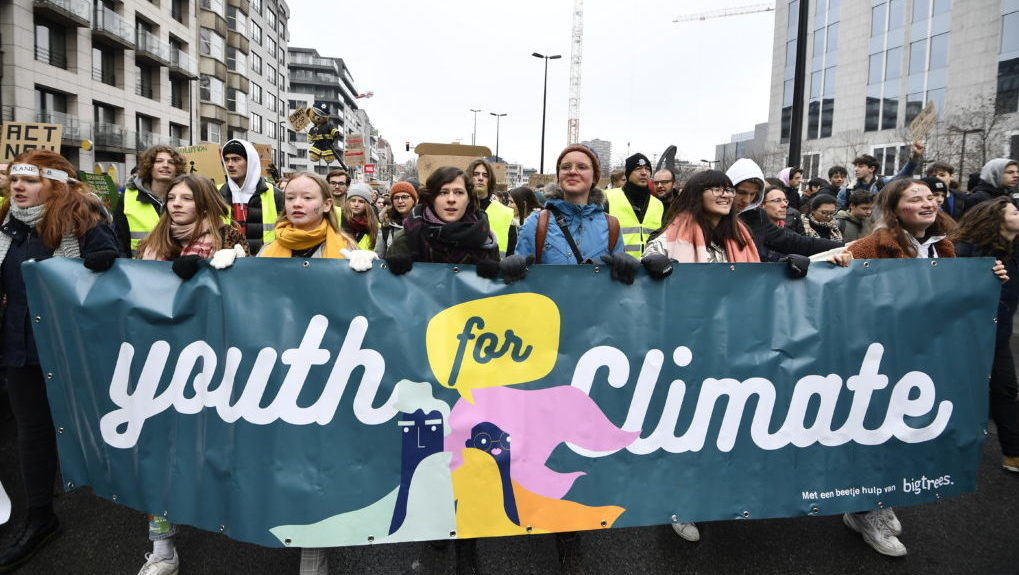 Over 70,000 people braced the cold air and pouring rain on Sunday, January 27 for the largest climate march in Belgian history. There have been mounting demonstrations throughout Europe. In Germany, Switzerland, and France, working people and students are pouring into the streets to bring attention to the impending climate catastrophe and a rapid transition from fossil fuels to a sustainable economy based on renewable energy. Socialist Alternative’s sister party in Belgium, the Left Socialist Party and its student wing Active Left Students have been energetic in the struggle on the streets and in schools.

These broader protests run parallel to the explosive School Strike 4 Climate, which was started in Sweden by Greta Thunberg, and has now spread to 270 cities in 17 countries. Students have initiated a call for an International School Strike on March 15, which could be a key moment for bringing the struggle to the U.S. and for building an international movement for the climate.

In Belgium, where air quality is among the worst in Europe, tens of thousands of students have skipped school weekly and held demonstrations. Flanders (the northern region of Belgium) Environment Minister Joke Schauvliege resigned in scandal after claiming the youth strike was actually part of a “set-up,” not unlike how right wingers called the Parkland activists “crisis actors” to discredit their message. This shows how worried the establishment is by the students’ defiant tactics.

The January 27 protest in Brussels was packed with families and working Belgians of all ages, but young people were the clear driving force. Teenagers climbed atop monuments and construction barriers and led chants in Flemish, French, and English, injecting a mood of disobedience and international solidarity against capitalism into the protest.

Climate change is the most stark representation of capitalism’s inability to promise a future for working-class youth. Decent, well-paying jobs, clean air and water, and protection from devastating natural disasters are no guarantee under this system. Young people everywhere are challenging the system and looking for any way to address the environmental disaster that has already begun. This radicalization will continue to search for expression in politics as well as the workplace as the younger generation moves into the workforce.

This generation genuinely can’t afford to be patient. Instead they are doing what they can, boldly condemning the establishment’s inaction and moving into struggle.

The last mass mobilizations in the U.S. around the climate were the People’s Climate March in 2014, but there is enormous potential ahead in the movement for a Green New Deal. The youth-dominated Sunrise Movement occupied Nancy Pelosi’s office in November to push for a full transition to 100% renewable energy by 2030, with a massive infrastructure program to create millions of green jobs, funded by taxing the rich. Since publicly joining their occupation, Alexandria Ocasio-Cortez has used her platform to argue for it. The plan has won over a broad base of support with 80% of registered U.S. voters in favor. The Sunrise Movement’s Road to a Green New Deal campaign could draw tens of thousands to rallies across the country and should be coordinated with the international day of action.

This grassroots climate movement is a major breakthrough following decades of insufficient reforms. Policies like permit trading, carbon taxes, and subsidies for renewable energy have thus far failed to prevent emissions from climbing to an all-time high in 2018. These policies overwhelmingly pass the costs onto consumers, which has outraged working people. A prime example is the fuel tax in France which sparked the Gilets Jaunes (Yellow Vests). Why should working people pay when just 100 companies are responsible for more than 70% of the world’s greenhouse gas emissions since 1988?

The fossil fuel CEOs, with their iron grip on politicians, will fiercely oppose a transition to renewable energy every step of the way. We call for taking these companies into public ownership, the only way to end the devastation caused by their relentless drive for profit and put power in the hands of workers and the community.

A key lesson of the student strike is that the time has come for international activism to play a role in fighting climate change. The Yellow Vest movement, the mass climate protests in Europe, and the global student strikes are all glimpses of the level of broad mobilization that is needed. The impending disaster is one of the most urgent factors pointing to the need for a socialist society, and its impact is global.

The demand for a Green New Deal has begun to mobilize youth in the U.S. The establishment is firmly against it, both Democratic House Speaker Nancy Pelosi and Republican Senate Leader Mitch McConnell publicly mocked the plan, and the members of the Select Committee on the Climate Crisis appointed by Pelosi received a combined $198,000 from fossil fuel industry PACs. Not to mention Diane Feinstein who has gone viral for her shameful, dismissive response to students asking her to support a Green New Deal. Their refusal to take bold action points to the dire need for a new party with the political will to put a stop to the treacherous activity of the big polluters.

We need a new working-class party with no ties to corporate cash, willing to challenge fossil fuel backed politicians and engage in real activism. A new party would also need to organize a sustained environmental movement while fighting for quality affordable housing, clean air and water, retraining for workers in the fossil fuel industry, and genuine help and protection for communities struck by natural disasters.

The active involvement of unions will be indispensable in linking the movement for the climate to the broader struggles of the working class and all the oppressed. It will take a massive disruption of business as usual to address the impending ecological disaster. The labor movement in the U.S. has reemerged as an engine of change, with teachers strikes all over the country signaling a new period of revolt. Unions taking up environmental demands in their bargaining would constitute a major step forward in building a fighting movement for the environment. After all, the threat of work stoppage is what ended the government shutdown. In Europe and potentially in the U.S., the youth have found that strike action works, and while the student strike has forced the issue into the spotlight, workers have the leverage to win decisive victories by using their collective social power to stand in the way of profit.

Ultimately, we need to address the barrier of capitalism itself. Under this dysfunctional system, the drive for profit always finds a way to cause social destruction. Truly solving this crisis will require a shift toward a socialist economy, with production democratically planned to meet the basic needs of humanity. History shows such a vast restructuring of society is only possible with the backing of a determined mass movement. The International Day of Action on March 15 could accelerate the process of millions of ordinary people mobilizing to save the planet.