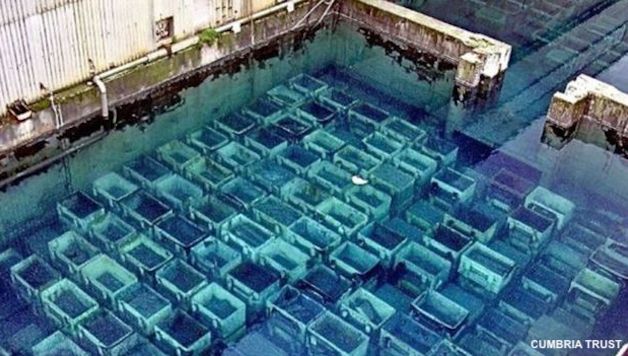 Originally published in Socialism Today, Issue 222 (October 2018), the political journal of the Socialist Party (sister party of Socialist Alternative in England and Wales).

The storage of dangerous radioactive waste is back in the news in Britain and around the world. When the UK’s first nuclear power plants were built in the 1950s we were promised pollution-free energy, too cheap to meter. Nuclear power was neither. There were massive cost over-runs, but more important, no-one seems to have considered the tons of highly radioactive waste materials produced. In reality, Britain’s nuclear reactor programme was a cover for the production of fissile material for weapons so that Britain could sit at the ‘nuclear top table’, along with the USA and Stalinist Russia. In Aneurin Bevan’s infamous words, he could not go ‘naked into the conference chamber’.

Most of Britain’s estimated 750,000 cubic metres of radioactive waste is kept in storage tanks in Sellafield, Cumbria. Some of it will be dangerous for many tens of thousands of years. It is characterised as low-level or high-level waste. Low-level includes paper, rags, tools, clothing, filters and other materials which contain small amounts of mostly short-lived radioactivity. High-level waste (HLW) is a different story. Produced by nuclear reactors, it mostly consists of spent nuclear fuel rods. They are highly radioactive and often hot. They consist, primarily, of caesium 137, strontium 90 and plutonium, all deadly. Radiation can permanently damage vital parts of the body and cause death.

The disposal of this most toxic of toxic waste is a global problem. It is estimated that the amount of HLW worldwide is currently increasing by about 12,000 metric tons every year (equivalent to about 100 double-decker buses). In 2010, some 250,000 tons of nuclear HLW needed storage, excluding what has escaped into the environment from accidents or tests.

Most scientists agree that the least bad proposed long-term solution is deep geological burial, in mines or boreholes. However, almost six decades after commercial nuclear energy began, no government has actually opened such a repository for civilian HLW. In 2013, the UK government tried to persuade Cumbria county council to host the site of a deep burial mine but, after major local opposition, councillors turned it down. Other councils were offered bribes of £2.5 million a year, but politely declined. Now it looks as though the government may override them. It is not even excluding national parks as possible sites.

How are other nuclear nations approaching this problem? Most agree that the hazardous material – some of it at temperatures of 90°C – has to be disposed of deep below ground where it can be isolated from all living things for tens of thousands of years while the radiation slowly decreases. Yet only Finland has made significant progress on a long-term solution so far, with the Onkalo deep storage facility under construction at Olkiluoto in the Gulf of Bothnia. In neighbouring Sweden a similar plan has yet to be approved.

France generates around three quarters of its electricity from nuclear power but, despite decades of activity, is still looking for a permanent solution. In the Champagne-Ardenne area of eastern France, a network of deep tunnels is currently being hacked out of the compacted clay, designed to find out whether this could be the final resting place for the country’s HLW. Local communities are receiving large grants to accept the site.

The German government has pledged to phase out nuclear power by 2022, and the main parties agree on the need for a central disposal site. Forty years ago a place was chosen near Gorleben, Lower Saxony, but this has been vehemently opposed by Germany’s strong environmental lobby and local communities.

In Japan, the government has drawn up a shortlist of potential sites for nuclear disposal. Since the Fukushima disaster of 2011, however, and in a country so prone to earthquakes, people are understandably reluctant to accept the government’s assurances on safety. Meanwhile, huge quantities of radioactive waste of all levels continue to accumulate at Fukushima itself, with no solution in sight.

In Russia, during the Stalinist era vast amounts of radioactive waste – including spent fuel rods and broken-down nuclear submarines – were simply dumped in secret locations in the Arctic and quietly forgotten about. These are the very areas that are now prime locations for gas and oil exploration.

The USA, probably the source of the world’s greatest amount of nuclear waste, is without any designated long-term storage site for the HLW currently kept on nuclear facilities around the country. A project to create a permanent repository at Yucca mountain, Nevada, approved in 1987, was cancelled during the Obama administration following opposition from environmental campaigners and the Shoshone Nation. Now in the Trump era, research into alternative sites seems to have ceased and Yucca mountain may come back on the agenda.

Large amounts of waste from US nuclear weapons research and operations are in deep storage at the waste isolation pilot plant in New Mexico – licensed for ‘permanent disposal’ for ten thousand years at a cost of $19 billion. Could this be used for the power industry’s HLW too?

Unlikely, given that in 2014 this plant experienced an explosion which exposed 21 workers to internal doses of plutonium, putting them in danger of bone, liver and lung cancers. Ryan Flynn, environment secretary for New Mexico, said at a news conference: “Events like this simply should never occur… one event is far too many”. It has certainly focused attention on the problem of the growing backlog of waste from both military and civilian origin.

Meanwhile, in Canada, a plan by Ontario Power Generation (wholly owned by the government of Ontario) to create a nuclear dump for low and intermediate waste in the Great Lakes area faces stiff opposition from environmental campaigners, First Nations and local communities. Many fear it could ultimately become a dump for HLW. The campaign, Stop the Great Lakes Nuclear Dump, has attracted support across Ontario as well as from the US states of Illinois and Michigan.

As recently as August 2018, activists with the Great Lakes Environmental Alliance, Don’t Waste Michigan, and the Coalition for a Nuclear-Free Great Lakes, uncovered a plan from the US Nuclear Regulatory Commission. It aims to transport spent reactor fuel rods from the LaSalle power plant in Illinois to Port Huron, Michigan, and then ship them to an unknown destination, probably a test facility in Canada. Activists state: “A spill, release or fire here… could potentially poison forever drinking water and freshwater ecosystems for up to 40-plus million people”.

Nuclear power is neither cheap nor pollution free. Today, renewable sources of energy – wind, tidal and solar power – could meet all our needs. They could also provide local sources of power in poverty-stricken areas, as well as create skilled long-term employment. Socialists worldwide must demand that no more nuclear power plants are built. Furthermore, that existing ones are phased out.

In Britain, we must oppose the Tory plan to build new, hugely expensive nuclear plants at Hinkley Point, Wylfa and elsewhere. Secondly, to open the books on the real cost of nuclear power, including long-term storage and security of HLW. Thirdly, we cannot trust either capitalist companies or governments to come up with honest proposals. We must call for a full open and honest discussion, including workers’ representatives, of methods of possible future usage or safe disposal of nuclear waste, which may well involve deep underground burial as the least bad option.