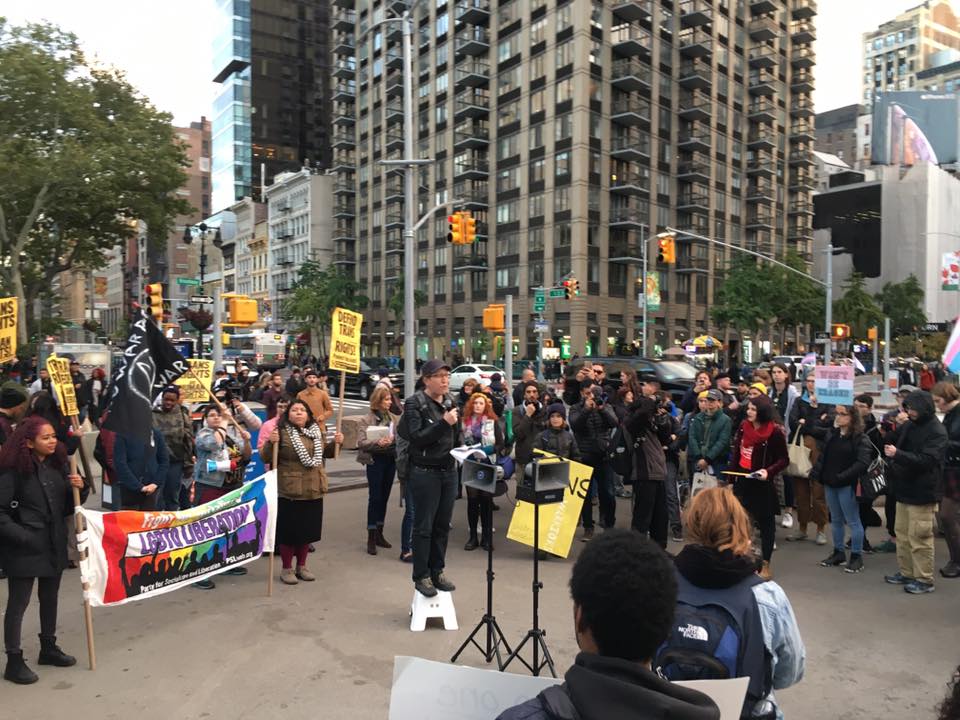 On October 21, the New York Times released an article detailing the contents of a leaked memo from the Department of Health and Human Services (HHS) which seeks to redefine gender to exclude trans, non-binary, and intersex people. The HHS is proposing a new definition of gender under Title IX that would base gender on a person’s genitals at birth. The HHS is putting pressure on the departments of education, justice, and labor to also adopt this definition. If adopted, this trans-exclusive definition of gender will affect over 1.4 million people living in the U.S.

The Trump administration has taken an adversarial position toward trans people since taking power by supporting transphobic bathroom bills and attempting to ban trans people from the military. However, this recent attack by the Trump administration is by far the most vicious action taken against the LGBTQ community since he has entered office. Trans people already face tremendous struggles under capitalism with high barriers to trans inclusive health care, disproportionate rates of homelessness, insufficient protections in the workplace and schools, and police harassment particularly aimed at trans people of color. If trans people are stripped of Title IX protections, trans people, but particularly trans youth, will become open targets to transphobic attacks. If this new definition is adopted by the Labor Department, trans workers will be unable to defend themselves against discrimination in the workplace.

The Supreme Court will soon hear a case that will decide whether trans workers are protected by civil rights laws that prohibit discrimination based on gender. The Department of Justice has already advised the Supreme Court to rule against these protections for trans people which, paired with the new definition of gender, would set a precedent of denying trans people their basic civil liberties. It is unclear yet what the impacts on health care will be, but there is concern that it will make gender-affirming surgeries and hormones even more inaccessible.

Beyond the material impacts, this new definition would have serious social repercussions. This new definition will legitimize transphobia, just like Trump’s policies around immigration embolden racists and xenophobes. Despite the gains trans people have made over the past period, there is still a misconception among many Americans that sex and gender are the same things. In a study done by the Pew Research Center, they found that only 64% of Democrats believe a person’s gender can be different than their sex and that eight out of ten Republicans believe that a person’s gender is defined by their genitals. Trump’s threatened attack against trans people is of a piece with his fomenting of white nationalism and savage attacks on immigrants including his current threat to send thousands of troops to the border to stop a refugee caravan. All these attacks are aimed at stoking fears and appealing to the most reactionary sections of his base.

Trans people cannot beat back these attacks alone. We need the solidarity of all other sections of the population – in reality the vast majority – targeted by Trump and the right. Already, we have seen how the feminist movement has organized mass protests around #MeToo that were able to unseat powerful politicians and wealthy executives. Trans people should join with socialist feminists, calling for the rejection of gender oppression of all kinds. We should reject the pro-corporate feminist agenda that ignores the plights of working and oppressed people and instead build a socialist feminist wing of the women’s movement that fights for the rights of trans people, for democratic control over our lives and bodies, and for Medicare for All that covers abortions, birth control, gender-affirming surgery, and hormone replacement therapy.

Progressive unions as well as women’s and LGBTQ organizations need to clearly and forcefully reject this trans-exclusive definition of gender. We need to prepare for massive coordinated action when, as seems likely, the DHSS goes through with this. Importantly the new order will open up a period of 60 days of “public comment” which will create a massive opportunity to mobilize people and bring serious pressure to bear on the right wing to back down. Students, for example, should hold sit-ins in their principal’s office until their school agrees to protect all students from gender oppression. The trans community should also use this not just as an opportunity to fight back against these specific attacks, but to extend our rights. The most pressing issues facing trans people are not isolated to the trans community. It is in the interest of all working people to win rent control, police reform, racial equity, and good paying jobs. We must build the biggest and broadest possible mass movement to win a world where all working and oppressed people are free.