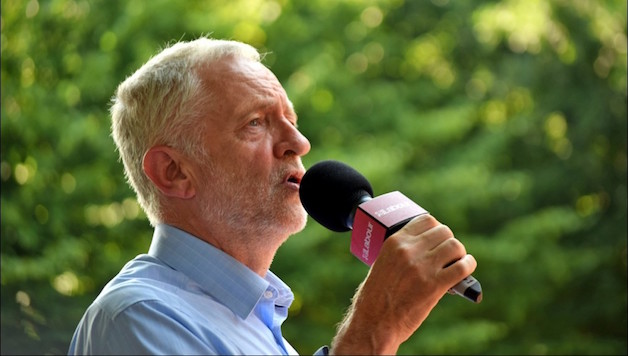 For international solidarity against all oppression and racism

The Tory government is back from its holidays and is once again in meltdown.

The millions suffering pay restraint, benefit cuts and poverty will be hoping that we are about to see the back of this government for the billionaires. The prospect is raised of a Jeremy Corbyn-led government – standing for a £10 an hour minimum wage, mass council house building, rent controls, free education and more.

Obviously the Tories will try to cling on, even while they fight like rats in a sack, to try and keep Corbyn out of office. They do so at the behest of the capitalist class who fear a Corbyn-led government would threaten its gargantuan profits. But the capitalist class has other allies straining every nerve to prevent Jeremy Corbyn becoming prime minister: the Blairites.

It could not be clearer that the pro-capitalist Labour MPs will do all they can to sabotage Corbyn’s leadership. We urgently need a Labour Party which is united around a programme to defend the interests of working and middle class people, rather than a party where many MPs are fighting for the interests of the billionaires.

The Blairite saboteurs in the Labour Party have spent the summer cranking up their false allegations of antisemitism to fever pitch, backed by the virulently anti-Corbyn leaderships of a few Jewish organisations. This furore ignores the evidence that, while antisemitism exists throughout society and must be combated, it is more prevalent among people with right-wing views than it is on the left.

Latest has been the ludicrous claim by the ex-chief rabbi Jonathan Sacks that Jeremy Corbyn was an antisemite who had supposedly made comments worse than anything since Enoch Powell’s viciously racist ‘rivers of blood’ speech.

In reality Jonathan Sacks’ views are a particularly intolerant brand of Orthodox Judaism, even refusing to attend the funeral of a Reform Rabbi and Auschwitz survivor on the grounds he was “among those who destroy the faith”.

However, veteran right-wing Labour MP Frank Field claimed he was so wholeheartedly in agreement with Sacks that he was duty bound to resign the Labour whip. The threat of Field being deselected by his local Labour Party was the real trigger. In fact, in 2012, Field wrote a piece for a book on Enoch Powell, which recalled his “affection and admiration” for Powell.

Imagine how the capitalist media would have shrieked if Corbyn had written such a piece. But it has barely been mentioned in the fawning coverage of Field’s decision. And of course Corbyn – who has a long record of opposing all forms of racism – would not have done so, whereas Field’s long record is of being prepared to whip up prejudice against asylum seekers.

Labour’s National Executive Committee meeting on 4 September bowed to pressure and adopted the International Holocaust Remembrance Alliance (IHRA) guidelines, including all of the examples.

The original motivation for not adopting all of the examples was to ensure that they could not be used as a pretext to try and prevent criticism of the Israeli government, something that even the home affairs parliamentary select committee concluded was a danger in 2016. Blairite Chuka Umunna, now cynically leading the antisemitism furore in Labour, was part of that committee.

The danger of this furore being used to gag criticism of the Israeli government was highlighted in a letter published in the Guardian from members of the Israeli Parliament representing “Palestinian Arab citizens of the state of Israel and Jewish supporters of peace and democracy”. They were writing to express their “solidarity with Jeremy Corbyn” and to “register our repugnance at these recent attempts to complete our erasure by forbidding within the UK Labour Party any mention by name of the forces allayed against the Palestinian cause.”

They concluded: “we stand in solidarity with Jeremy Corbyn and we recognise him as a principled leftist leader who aspires for peace and justice and is opposed to all forms of racism, whether directed at Jews, Palestinians, or any other group.”

Any hopes that the NEC meeting will end the false accusations by Labour’s right are completely utopian. Margaret Hodge MP made that clear last week, saying that agreeing to her original demand for the adoption of the IHRA in full was no longer enough and that she would continue to accuse the Labour leadership of antisemitism until Corbyn steps aside because “he is the problem”.

It could not be clearer that the agents of capitalism within the Labour Party are determined to prevent a Labour government coming to power and introducing radical policies in the interests of the working class.

They will only stop their sabotage if they succeed in crushing the Labour left and returning Labour to the days of New Labour – supporting privatisation, austerity and war. This is understood by many of those who have joined Labour to support Corbyn, as is indicated by the growing demands for right-wing MPs to be deselected, and the victory of the left slate in the NEC elections.

Unfortunately, however, at the top of Labour there is not a clear understanding that Hodge, Field, and the other pro-capitalist agents, have no place in a party that represents the interests of the working class.

John McDonnell, for example, is reported to have responded to Field’s resignation with a call to the Blairites not to split. Lying behind this is a fear that a split by the right could make it more difficult for Labour to win a general election.

But, as we have warned, the pro-capitalist wing of the Labour Party is actively working to prevent a Corbyn-led Labour victory. They are openly discussing how to do so most effectively – whether to split and form a new centre party now, to split after a general election to stop Corbyn becoming prime minister, or to keep up the pressure to force Corbyn out before an election.

A party without these blatant saboteurs would be far stronger in its ability to act in defence of the working class. It is extremely urgent that action is taken.

Some of the key measures that are needed are the reintroduction of mandatory reselection of MPs, and the democratisation of the selection of Labour councillors.

The restoration of trade union rights within the Labour Party, under the democratic control of trade union members is also vital. It would be part of returning the Labour Party to a modern version of its founding federal structures. This would enable all socialist and working class forces to come together to build a powerful, 100% anti-austerity party.

If a clear call for such measures was made it would enthuse all those who support Corbyn’s anti-austerity policies but are currently feeling disorientated by the lack of clear message on how to combat those who are determined to return Labour to being another pro-capitalist, pro-austerity party.