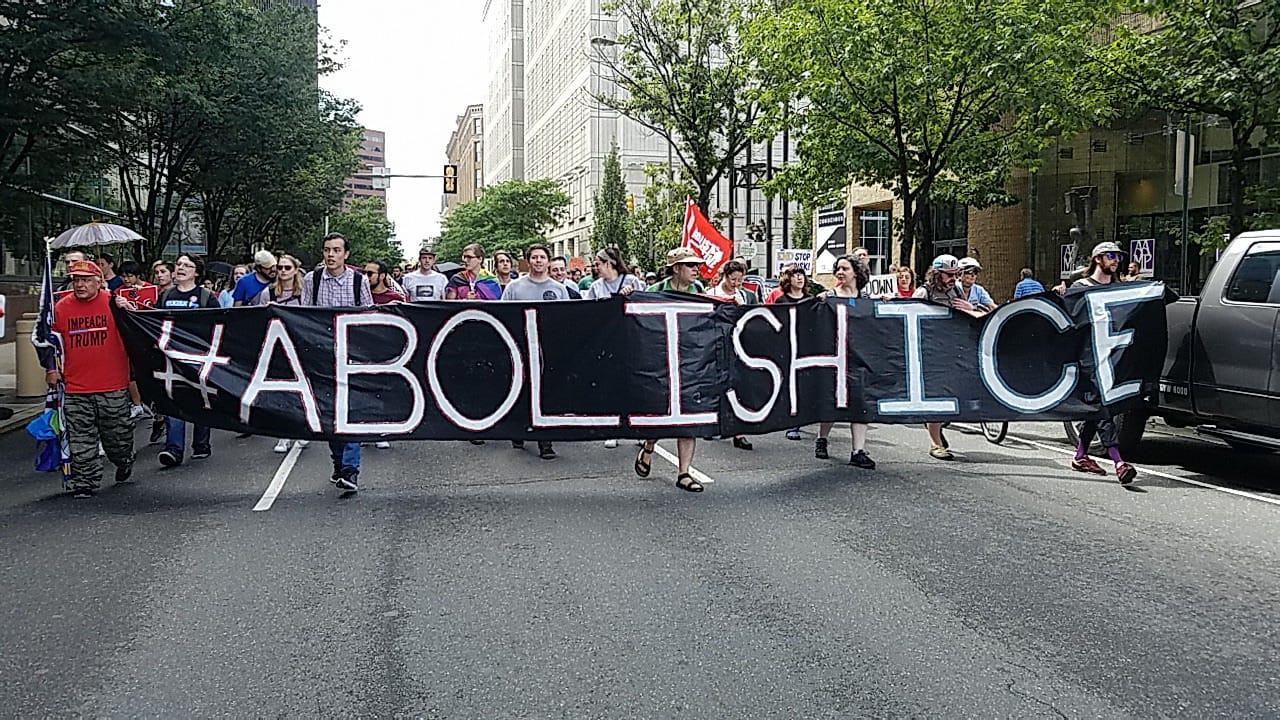 On the evening of July 2, Philadelphia’s Chinatown ICE office was blockaded by Occupy ICE PHL – a coalition of left forces fighting back against Trump’s cruel immigration policy. The action was inspired by the bravery of the Portland occupation with demands  grounded in discussions with established immigrant organizations: end the PARS contract (a data sharing agreement between the city and ICE), shut down the Berks family detention center, and abolish ICE. The encampment was bolstered by the national public outcry around family separation which just days earlier had mobilized rallies of thousands. Within a week, we changed the conversation throughout the city.

By using disruptive nonviolent civil disobedience and a flexible response to police provocations, we were able to maintain the occupation through the first night. The next afternoon, mass arrests finally took place in the full light of day with the focused attention of the media and local politicians. Jail support was organized and donations poured in for the legal defense of the protesters. Instead of being demoralized by the repression of the occupation, activists organized a celebratory July 4 ‘alternative block party’ in front of the ICE office retaking the streets and keeping the issue in the media spotlight. Finally, on July 5th, under pressure from Homeland Security, Philadelphia police brutally cleared the camp. A previously scheduled press conference, featuring a broad range of speakers supporting the action, took place against the background of police throwing food, water and activists’ personal possessions into the trash. On the night of July 5 the occupation was quickly re-established at City Hall to keep pressure on the Mayor.

Philadelphia Mayor Kenney claims to be part of the Democratic “resistance” to the Trump presidency, and proclaims Philadelphia a “sanctuary city.” Yet he signed off on PARS data sharing – effectively assisting ICE to deport and detain immigrants in Philadelphia. The current contract expires on August 31 and for renewal it must be signed by two of three city officials: the mayor, the district attorney, and a judge. DA Krasner had already pledged not to sign, leaving the Mayor a vulnerable target.

Within a week, the city had arranged separate meetings with ICE officials, representatives from two leading immigrant organizations, and occupation activists. ICE admitted PARS data could be used to deport witnesses and victims of crimes, not just the intended perpetrators. This admission, together with the unrelenting positive press coverage of the campaign and overwhelming public rejection of “kids in cages,” forced Kenney to announce on July 27 that he would not renew the contract. The movement had pushed him into a corner, and exposed his claim that Philadelphia is a “sanctuary city.”

Our August 4 “March to End PARS” was quickly reframed as a celebration of the win, and posed the mayor’s silence on Berks as collaboration with ICE. Labor groups from across the region have now organized an August 15 rally in Philadelphia.

Socialist Alternative members helped provide political and organizational leadership at every juncture. We helped organize mass meetings, direct actions, marches, and logistics – including getting arrested and sleeping at the encampments. We argued for building solidarity for immigrant struggles by reaching out to unions, faith, community, and student organizations. We pushed for an escalating campaign of broader mass actions, where undocumented immigrants wouldn’t risk arrest by attending. We urged the movement to build empowered, accountable, democratic leadership structures.

The PARS contract will expire on August 31, but Philadelphia will not be a true Sanctuary City on September 1. We need to build solidarity between documented and undocumented workers to stop the race to the bottom. We need to end “Stop And Frisk” so working people can walk through their neighborhoods without fear of harassment by racist cops. We need to build affordable housing, rebuild our crumbling infrastructure, and fully fund our schools while moving to a $15 an hour minimum wage.  We need to tax the rich to create a real sanctuary city for the working class, regardless of legal status.