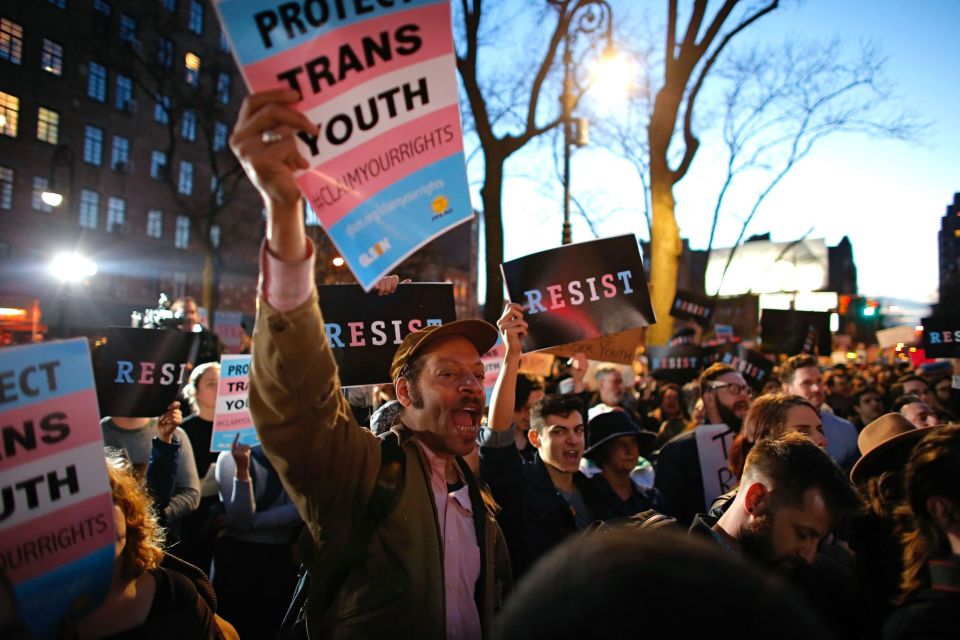 As we go to press the Supreme Court has issued a 7-2 ruling in favor of a Colorado baker who refused to make a wedding cake for a same-sex couple. This highly anticipated ruling is a direct attack on the LGBTQ community disguised as a protection of “religious freedom.” The ruling has come down at the very start of Pride month. The LGBTQ community should link up with all oppressed people and use the Pride events this month as a jumping off point for a coordinated movement against right wing attacks and for fully funded social programming, housing, medicare for all and other crucial things working people need.

After decades of hard fought progress on LGBTQ rights, the Trump reaction threatens to drive us back. We stand firm and refuse to return to the closet. A generation of young people are invigorated to fight for LGBTQ rights, against racism, and against sexism.

While 7% of youth identify as LGBTQ, they make up 40% of homeless youth. The average household income for same sex couples is 20% less than heterosexual couples. And, devastatingly, the National Coalition of Anti-Violence Programs reports that there was a 86% rise in anti-LGBTQ homicides in 2017 compared to 2016. The unequal and often dangerous conditions LGBTQ Americans face has been intensified under the Trump presidency which has emboldened bigots of all stripes.

The election of Trump and his strongly anti-LGBTQ vice president Mike Pence has emboldened a whole range of right-wing bigots. The effect of Trump’s presidency was immediately felt by LGBTQ folks as hate crimes spiked the day after Trump was elected in 2016. Meanwhile, local Republican legislators have stepped up to pass more discriminatory anti-trans “bathroom bills,” with 129 anti-LGBTQ laws introduced in state legislatures in 2017. Nationally, the Supreme Court’s recent refusal to hear two appeals from LGBTQ groups in Mississippi means that the state’s backward “religious freedom” law that allows companies to refuse service to LGBTQ people has been upheld.

Beyond the rise in discrimination in the Trump era, his general right-wing, anti-worker policies will disproportionately impact LGBTQ people. Trump’s massive tax cuts give corporate giants like Amazon over $789 million annually while placing the burden on working people to fund critical social service programs.

However, Trump and the political establishment’s ability to carry out this agenda is by no means guaranteed! Boston’s demonstration of 40,000 people last August against the alt right following Charlottesville pushed back far right organizing in a way that no legislation could. Another example is the recent historic victory in Seattle to tax Amazon to fund affordable housing which will disproportionately help LGBTQ people. In both of these instances and countless more, it is the power of our movements that wins victories.

We Need a Real Political Alternative

Despite their rhetoric, the corporate leadership Democrats refuse to take a fighting stance for LGBTQ people and stand against Trump’s anti-worker policies and hateful rhetoric. The infamous anti-trans “Bathroom Bill” HB2 in North Carolina was voted for by eleven Democrats.

Despite mass public support, the national leadership of the Democrats still hasn’t come out in support of Medicare for All universal healthcare and in California they blocked enacting a statewide single payer system. Medicare for All would be a massive step forward for LGBTQ people by ensuring their access to gender-affirming health care, and prevention and treatment for HIV/AIDS.

This shows how badly we need a new political party that doesn’t take corporate money, that could truly fight for the interests of LGBTQ and working people. The hypocritical approach towards LGBTQ needs by the political establishment is perhaps best embodied by the corporatization of Pride parades themselves. These actually originated in the Stonewall Riots in New York City in 1969 led by trans women in response to police violence. They now serve partially as a marketing tool for the same huge corporations that actively lobby against universal healthcare, funding affordable housing, and higher minimum wages; all policies that would disproportionately help LGBTQ people.

Need for a fighting LGBTQ movement

The radical roots of Pride show the way forward. We need an approach to LGBTQ liberation based in struggle and mass movements that fight for real change. We’ve seen eruptions of social struggle in the last few years, like the new women’s movement, the Black Lives Matter movement, the anti-Trump protests, the teachers’ strikes sweeping the “red states”, and the movement around Bernie Sanders’ 2016 presidential campaign.

Whether it’s the teachers strikes which have won big pay raises for teachers and increased funding for students, or the recent Tax Amazon victory in Seattle, the biggest victories come when all working people stand together in solidarity. Likewise the LGBTQ movement needs to link the defense of our gains to broader demands that will benefit all working people but LGBTQ people disproportionately. While we fight against hate crimes and bathroom bills, we fight for affordable housing for all, living wages, and universal health care.

At the same time, we need to arm these movements with the strongest strategies and tactics necessary to win gains for LGBTQ people. Our movements need to be prepared to harness our collective power by using rallies, marches, strikes, and non-violent civil disobedience. At the University of Washington, graduate-student workers made trans-inclusive health care one of their central demands in their recent strike. This approach shows the way forward.

A Socialist World is Possible

As Trump and Pence try to roll back the gains we made under the Obama administration, we are reminded that in a capitalist society, every victory we win is vulnerable and fragile. That’s why Socialist Alternative is fighting for a socialist transformation of society, where the needs of people are put over the needs of shareholder profit, where discrimination is left in the past, and our differences are celebrated and cherished rather than used as a wedge to keep us apart.

The bosses and their purchased politicians know that if working people and all the oppressed were united in common struggle for guaranteed housing, employment, education and health care, their massive profits would be threatened. It is only by linking our movements together and fighting arm in arm that we will win the world we deserve. The struggle for that world is how we can win real liberation for LGBTQ and all oppressed people.