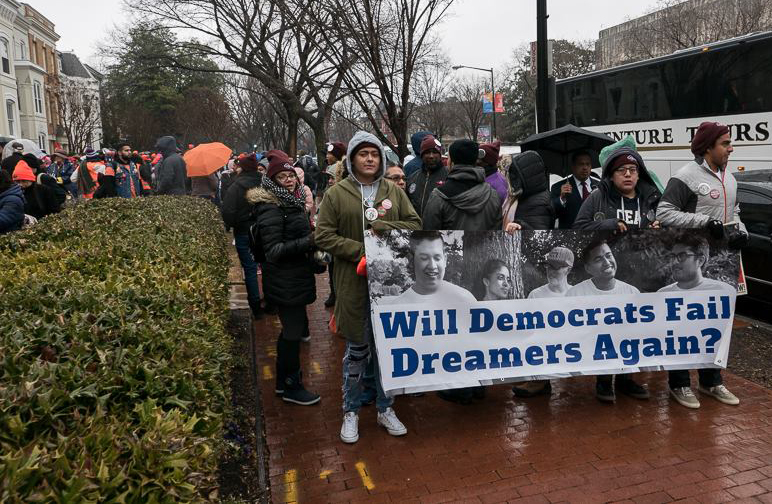 On February 7, I attended a day of action in Washington, D.C. calling for a clean Dream Act. In the age of Trumpism and in the face of relentless attacks on our undocumented brothers and sisters, I choose to stand in solidarity with the working class and marginalized.

The action was called by numerous immigrant advocacy oriented organization on the East coast, among other organizations involved in social justice issues. MI Casa, Make the Road, Center of Popular Democracy, Good Job Nations, NYC justice league, and the New York immigration Coalition, were among some of the biggest names on the scene. There were numerous speakers who convened at the Lutheran Church of the Reformation – a ten minute walk from the Capitol.

The church was maxed out with participants for the day of action, estimates were in the thousands. Among the most notable speakers was Representative Keith Ellison (D) Minnesota, who spoke with a heavy resemblance to Bernie Sanders and made appeals to the need for international solidarity. He criticized corporate America and “special interests” for not holding multinationals to account on their border-crossings and reaping of profits, the same way we (United States) do with the undocumented community. He strongly said he would Vote No on the budget bill which did not include a Dreamer bill to a church filled with day of actions participants. While voting no is good, Keith Ellison unfortunately did not lay out a clear alternative to to Nancy Pelosi and the Democratic Party corporate leadership who have sold out immigrants. While he makes nice speeches, we need a strategy for pushing past the corporate Democrats who caved in the budget fight without any progress on immigrant rights.

It was very interesting to see how explicitly speakers and the room is general were in total rage against both political parties on their inaction surrounding the passage of a clean Dream Act. Linda Sarsour, a very notable Palestinian activist with NYC Justice League, fired away at the Democrats, to my surprise Ellison seem to nod in agreement with her speech. She stated she is not a Democrat and never been loyal to the Democrats and that they will feel it come elections reflected the mood in the room.

The day of action was oriented around scaring Democrats about the 2018 elections with no other strategy. No call for mass mobilizations or to organize independent political formations or, in other words, “no teeth to bite.” People are angry, however there is no clear action plan on how to obtain comprehensive immigration reform or a clean Dream Act.

Shortly after the speakers, demonstrators proceeded to the Senate building to occupy the rotunda inside. It was such a powerful and moving experience to see that all this organizing was being done by the youth. The chanting – “When DREAMERS are under attack, What do we do? Stand up, Fight back! Their defiance, rage, and determination. It is in my opinion a stark political realization that this is do or die.

That said, there was also an atmosphere of uncertainty for a lot involved in the strategy of “hoping” that democrats will stand with them. This contradiction was widespread among those involved in these actions.

Unfortunately, once we began our occupation, not one elected official from either party could been seen near this action – everything was business as usual in the Senate building. This to me was 100% confirmation that neither political party is willing to get their toes wet to stand for Dreamers, not even for the photo op. We also occupied Senator Chuck Schumer’s office and, to nobody’s surprise, he was nowhere to be found.

It was a much-needed therapy session as occupiers told their stories on why the passage of a clean Dream Act is important. One DACA recipient spoke of the uncertainty, she faces when her status expired and how hard it would be to be undocumented or to be return to a country. A country that unfortunately has more limitations. We concluded once again by letting his staffers know that Schumer and all Democrats “will feel it at the polls,” there were more taunting remarks with very little plan to carry them through.

An “open-ended” debate about immigration continues in Congress, however, it is safe to say Democrats have already caved in. This realization will become more apparent as further events unfold. They are taking a pragmatic approach and failure to pass any legislation will risk that they don’t receive funding for their constituents in areas of education, health care.etc. But in truth the Democrats are not fighting for ANY section of the working class. A real party of opposition which based itself on the interests of working people would mobilize around a bold program including a $15 minimum wage, Medicare for All and a clean Dream act in the streets and in Congress.