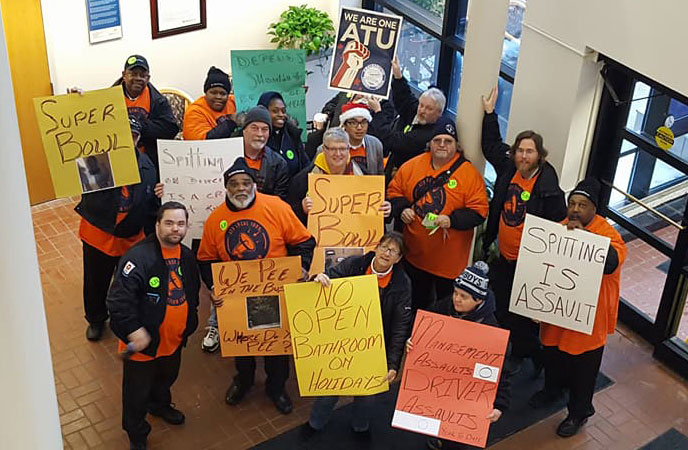 [Editors Note] The MetCouncil (management) will meet on January 24 to decide whether to ratify the
contract adopted by the union. If they choose not to ratify the contract, the union has already
filed a 10-day notice and will strike on January 26, a week before the Super Bowl.

Winning the Battle – The ATU Contract

On Sunday and Monday December 17 and 18, members of Amalgamated Transit Union (ATU) Local 1005 in the Greater Minneapolis-St. Paul area voted by 82% to accept a new contract. This vote marks an end to the first stage of a saga that opened up over the past period for the union in its fight back against cuts pushed by the MetCouncil (management). This has been especially important stage given the responsibility these workers were tasked with around the upcoming Super Bowl 52 in Minneapolis. Rank-and-file activists in the union including Socialist Alternative member and Local 1005 newly elected President Ryan Timlin played key roles in the struggle.

Against a background of a U.S. labor movement facing brutal perspectives of right-to-work on a national scale embodied in this year’s Janus v. AFSCME case in front the Supreme Court, ATU 1005 workers took a bold stand. They demonstrated the way to fight attacks: for workers to self-organize and mobilize to take direct and mass action – not to accept concessions and prepare to “hold-on” in their aftermath.

The issues in front of the 1005 workers were not new.  They faced management and a political establishment keen to dismantle the power of the unions in the public sector and to corporatize and eventually privatize public transit services in particular. The MetCouncil’s early offers reflected this agenda, pushing unlimited part-time work, refusal to implement measures to prevent workers from violent attacks, inadequate layover time (time in between bus runs that drivers use to go to the bathroom, rest, etc.), poor wage increases, and much more.

The timing was critical. ATU workers had a key opportunity with the upcoming Super Bowl taking place in Minneapolis this year. Due to the thousands of people coming in needing transportation, the Super Bowl could not have functioned without ATU 1005 workers. Had they waited past this event, it would have taken away balance of power that was firmly in favor of these workers and given it to the establishment, who were intent on pushing attacks on the union.

Earlier in the year, union activists, including Socialist Alternative members, began to organize and build a Contract Action Team of rank-and-file members to prepare for the possible necessity of taking strike action during the Super Bowl. The Team went into the garages to mobilize and discuss with other workers the issues and the need to fight.

This mobilization had a big impact. The first concessionary contract offer was dealt a resounding defeat by the workers, with 93% voting “‘no”’ and giving the go-ahead authorization for a strike! This meeting saw a doubling in the number of workers attending the vote as compared to the previous contract, a clear indication that consciousness and militancy had begun to grow. Building from this, workers took action, including a one-day action where drivers did not sign up for voluntary overtime (which management has relied on) and packed two different MetCouncil meetings. The second of these meetings was shut down by workers and allies for over an hour.  Along with this, the ATU built solidarity  with other unions including the NFL Player’s Association and moved towards a Solidarity Committee of community members and workers’ families.

This strong mobilization for a strike in fact is what avoided a strike. The establishment made their intentions clear early on with the NFL starting to map out a ‘contingency plan’ in case of a strike that would include hiring replacement workers for the transit during the event (aka scabs).  But the actions by the workers and the support they were able to muster shook the political establishment to their core – they did not want a showdown with the workers before or during the Super Bowl. In a span of just three days, management, faced with the power of organized and active workers, was forced to reverse of all of its concessionary demands and the union made a number of further gains on important issues.

The victory against the concessionary contract and the fightback of the ATU 1005 workers is an important first step. Cuts and attacks on transit workers are not vanquished forever, ATU workers must build on this victory for the future. Other unions should use it as a strategic outline for their battles. But what is necessary is to not only defeat attacks but win offensive victories for both the ATU members and the wider U.S. working class and labor movement. The guiding principle of a revitalized labor movement must be “an injury to one is an injury to all.”

ATU 1005’s contract struggle shows that unions win with the active participation of as many members as possible. This means actual decision making power over the decisions that affect their lives. In contrast, the strategy of much of the U.S. labor leadership of “having a seat at the table” has been a marked failure.

The very existence of unions came from the power of workers acting collectively in an independent and organized way. This meant utilizing our power to shut down workplaces and the economy by withdrawing our labor – strikes – and relying on our own strength, not the bosses’ “good will” to shape the demands for what working people really need. This type of class-struggle-based strategy linked to fighting for demands that represent the needs of both the organized and unorganized made the labor movement made it the powerful spearpoint for fighting for better conditions for the entire U.S. working class.

Over the last several decades, unions isolated their focus to defending their narrow pieces of turf (often against one another). Because of this the bosses have thrived and cooperated with both mainstream political parties in a concerted assault on labor and the working class.

Trump and the Janus case have only made these attacks more acute. The labor movement has the power to initiate a powerful public pressure campaign against the Supreme Court decision in the Janus case but it has to abandon the failed lobbying tactics toward the corporate establishment and parties and build a united movement. Such a movement could garner support by linking the attacks on unions to the broader issues faced by the working class like fighting racism and sexism given the multiracial composition of and high number of women workers in the public sector.

Local 1005 is providing an example of how to move toward this movement building approach. It requires first and foremost the politicization and active democratic involvement of the union members in addition to a bold fighting strategy. Socialists have a big role to play in putting forward the bold ideas and tactics necessary to conduct such a fight, which will take things like direct action, strikes and the building of mass social movements to turn the tide for labor and the working class in the U.S.

The class-based strategy adopted by ATU and others like it in the recent period has made things like the victory over the concessionary contract possible – relying on our own strength, not fickle allies like corporate politicians and management. As socialists, we believe we need to not only do this in the workplace but in the political realm as well.

Labor, social movements, and working people in general need our own political representatives that are democratically accountable to us, not the interests of corporations and the elite. We need candidates that will be pro-worker, levies taxes on the rich to fund transit at the local, state, and national level, and voluntarily take only to the wage of people they represent. Ultimately, unions like ATU, along with other forces, need to move toward building our own party that will fight in the elections, communities, and workplaces for what working people need and the struggle for a better, socialist society.