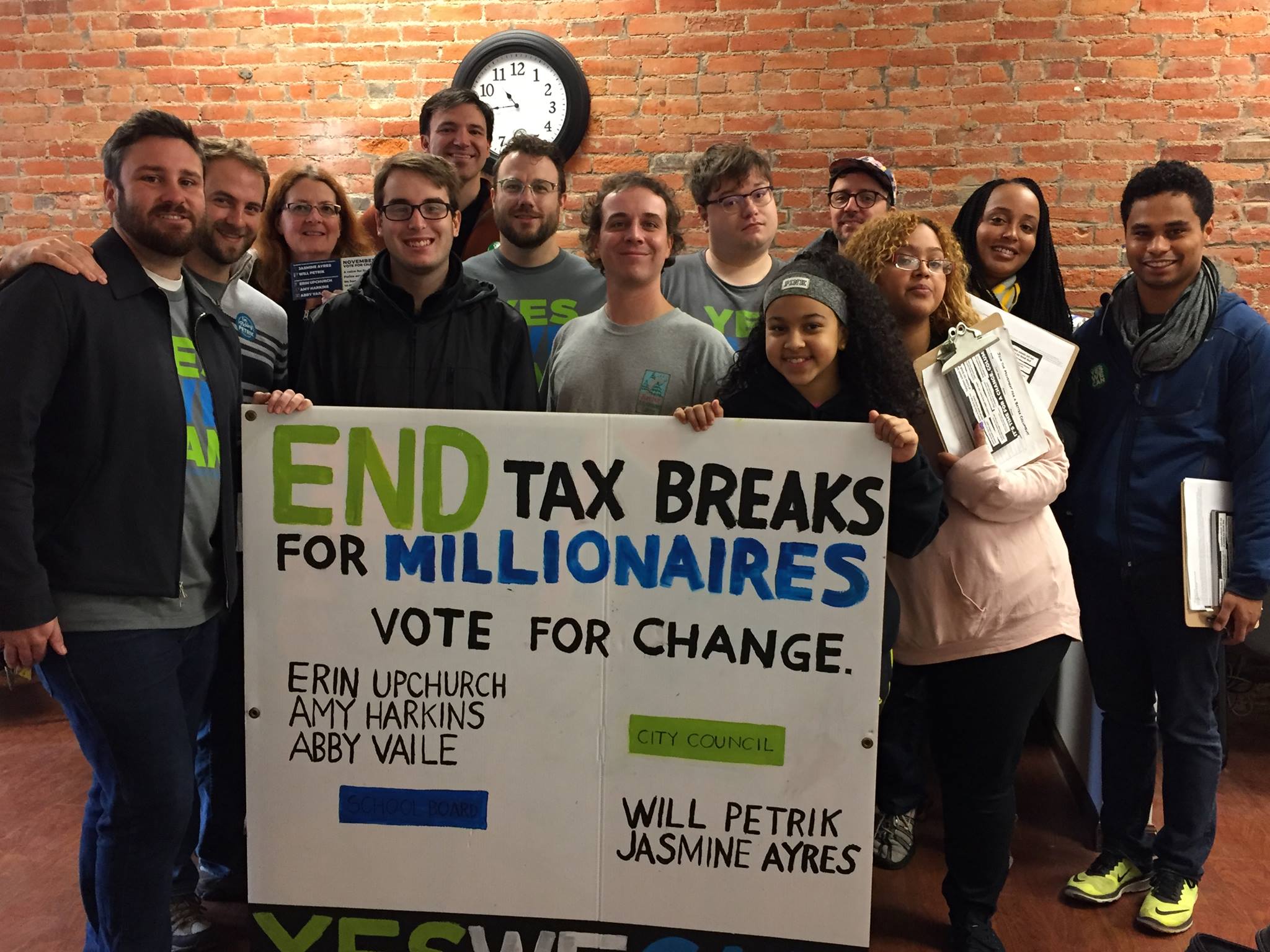 Yes We Can (YWC) recently became the Columbus chapter of the Working Families Party, a national organization that seeks to push the Democratic Party to the left. Inspired by Bernie Sanders’s call for a political revolution, YWC ran a slate of Columbus City Council and City School Board candidates for the 2017 municipal elections. YWC’s campaign criticized the role of corporate money in politics and supported demands like a living wage, improved public transit, police accountability via civilian review board, and increased demands on housing developers. Their leading slogan, “Money Out Of Politics,” connected with working people seeking an alternative to the corporate-funded Democratic Party candidates who have long controlled Columbus politics.

While YWC was able to build an impressive base ready to fight for change in Columbus, we believe their campaign could have been strengthened through a more vocal rejection of all corporate donations and clearer calls for a $15 minimum wage and taxing the wealthy developers. Further, YWC’s challenge to the corporate status quo would have been far more powerful outside the Democratic Party, building a movement that focuses on struggle in the streets and in workplaces.

YWC’s challenge to the local Democratic status quo incumbents is part of a larger national picture of left Democrats running against the establishment. A wave of Democrats captured Republican seats across the country during the November 7 elections, including a number of genuine progressives.

These numerous Democratic victories against incumbent Republicans represent a rapid shift in politics and a deep rejection of Trump’s pro-billionaire agenda. While Democratic Party officials consider the results a promising indicator for the 2018 midterms, the victories of left challengers within the party point even more to the growing strength of the Bernie-inspired insurgency standing against the corporate Democratic establishment.

YWC did not win any seats on election day, but their message still resonated with the tens of thousands who voted for these progressive Columbus candidates at the ballot box. While the corporate Democratic candidates ultimately did not see the small, committed YWC as a contender for the general election, the enormous war chest they raised was meant to send a message to any left opponent who might dare stand against the party’s establishment rule.

Despite corporate incumbents raising over a million dollars, the Democratic Party was not able to suppress YWC’s appeal to workers and young people in search of a political alternative for Columbus. Although they were outspent 10-to-1, Jasmine Ayres, one of two YWC-endorsed candidates for city council, won over half the total votes of Democratic incumbent Mitchell Brown.

These election results showed that there is increasing confidence among working people to support progressive challengers to corporate candidates. It is clear to many working people in Columbus that the current Democratic-ruled city council has sustained an unacceptable status quo of rising housing costs, rapid gentrification, and rampant police violence.

Not surprisingly, these PAC’s and their affiliated development companies have reaped millions in benefits from their large donations. Columbus City Council recently voted 6-0 in support of a deal with Pizzuti GM LCC, whose affiliated PAC donated thousands to each Democratic incumbent candidate. The deal would gift Pizzuti a ten-year 75% property tax abatement on a $16.6 million commercial development in the Short North, a neighborhood suffering from rapid gentrification.

The Franklin County (Columbus, OH) Democratic Party’s fight against YWC exemplifies the clash that activists hoping to enter the Democratic Party will continue to face. The local Party’s attempts to discredit YWC candidates echoed the DNC’s brazen sabotage against Bernie Sanders’s primary campaign and reiterated the extent to which the DNC intends to squash any left opposition. Besides their massive fundraising efforts for incumbents, Columbus Democratic Party officials sought to push back growing support for YWC by claiming that YWC candidates are “not real Democrats”. They asserted that YWC was misleading voters given the organization’s affiliation with the Working Families Party.

The Working Families Party (WFP), of which YWC is the Ohio affiliate, has historically supported left-leaning candidates in Democratic primaries through fusion voting in those states that allow it, including New York State. Overall, the WFP’s long term strategy has been to push the Democrats to the left. The organization supports a platform of progressive reforms like affordable housing, healthcare for all, and an increased minimum wage, all reforms that the corporate Democratic Party has fought tooth and nail to prevent from passing.

Nationally, the Working Families Party (WFP) has a mixed record of progressive action. For example, the WFP has twice endorsed Andrew Cuomo for New York governor while rejecting more progressive candidates in the race.  Despite the WFP’s support for Sanders in 2016 and its progressive platform, the organization has often given left cover to corporate Democrats. As we explained in 2014, the WFP was founded in the 1990s in New York State as a tool to bring those attracted to a newly forming Labor Party back into the Democratic fold.

While we sympathize with YWC’s desire to transform the Democratic Party, we feel this will not be possible given the central dominance of corporate interests within the Democratic Party. For the Democratic Party to be transformed into a party that truly represents the 99%, it would need to reject all corporate donations, hold its elected officials accountable to a progressive platform, be membership based, and put real democratic structures in place that allow their voters to have a say in the party. The corporate establishment of the Democratic Party will do everything in its power to resist any of these changes, which would undermine Wall Street’s rule over the party.

Through the campaign, YWC has managed to differentiate themselves as the progressive Democratic wing leading an insurgency against the corporate wing of the Democrats. But as our own experience in Seattle and Minneapolis has demonstrated, it is far more effective to build mass movements on working-class issues by breaking from the Democratic Party and channeling that energy into building the basis for a new party for working people. While a new party may seem unrealistic to many, a recent NBC News/GenForward poll revealed that 71% of millennials ages 18-25 believe a new third party is needed. A number of independent campaigns around the country this November confirm a growing openness to independent socialist politics and potential for a new independent left party. Two independent DSA-endorsed candidates in Pittsburgh and Knoxville, Mik Pappas and Seema Singh Perez, were elected in November. In Minneapolis, Socialist Alternative independent candidate Ginger Jentzen ultimately lost her race for City Council, but raised a record-breaking $181,000 without a dime of corporate money and received the most first choice votes of any candidate in the city’s ranked choice voting system.

Socialist Alternative in Columbus would have been eager to work with YWC in office to fight for gains for working people. However, we recognize that progressive candidates are often blocked from pushing through the same reforms on which they campaign. Without a clear strategy to break with the politics of the Democratic Party, the Democratic establishment will co-opt left challengers and prevent them from pushing for real reforms. Candidates that seek to challenge the political establishment must have a clear strategy for resisting direct corporate pressure and the demands of the Democratic Party establishment. With this in mind, candidates hoping to push for bold reforms should run outside the two-party system with an eye toward building a new party for working people.

Challenging the grip of the Democratic Party establishment will require grassroots movements outside of the electoral arena that mobilize working people for clear demands like a $15 minimum wage, community control of police, affordable housing, and taxing the big developers. While the Working Families Party maintains an exclusively electoral focus, YWC and similar progressive organizations should continue to unapologetically fight for a $15 minimum wage, taxing the rich, and affordable housing by building a grassroots movement in the streets. The demands on which YWC campaigned can ultimately only be won through this kind of political struggle.

The impressive results for YWC candidates show that many working people in Columbus are ready to fight for more bold working-class demands. With a base of over 400 volunteers who welcomed their message of progressive change, YWC has already built the potential foundations of a strong campaign for rent control or a $15 minimum wage. This kind of grassroots campaign could begin to shift the balance of power in Columbus away from the corporations and real estate developers that seek to turn the city into a playground for the wealthy. By fighting for policies that support working people, we can push back corporate control of the city and transform Columbus into a city of resistance to both Trump and the billionaire agenda.

We Need an Alternative to Corporate Politics

ABOUT US
Socialist Alternative is a national organization fighting in our workplaces, communities, and campuses against the exploitation and injustices people face every day. We are community activists fighting against budget cuts in public services; we are activists campaigning for a $15 an hour minimum wage and fighting, democratic unions; we are people of all colors speaking out against racism and attacks on immigrants, students organizing against tuition hikes and war, women and men fighting sexism and homophobia.
Contact us: info@socialistalternative.org
FOLLOW US
© Socialist Alternative 2019 | All rights reserved
147 Shares
Tweet
Share147