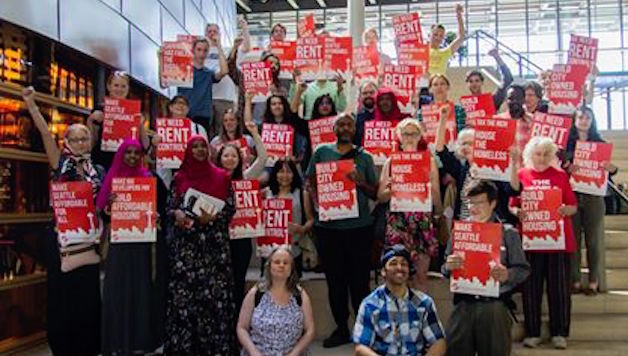 The for-profit housing market is failing working people. Ten years after millions of homes were lost to Wall Street in the 2007-2009 foreclosure crisis, there has been a sharp decline in homeownership while the number of renters has increased by more than 10 million households.

Skyrocketing rent is causing a lot of pain. From 2011 to 2016 the number of apartments that rented for less than $850 a month decreased from two-fifths of all rentals to one-fifth. Almost half of all renters now pay more than 30% of their income in rent.

While there has been a certain levelling off of the gap between rising rents and incomes over the past two years, a new report from Harvard University’s Joint Center for Housing Studies warns that it would take 24 years at the current rate to return to where we were in 2001. “The rental market thus appears to be settling into a new normal where nearly half of renter households are cost burdened,” concludes the report (www.jchs.harvard.edu).

The problem is most acute in the fastest growing cities in the South and West, but there isn’t a single county in the U.S. that doesn’t have a shortage of affordable housing according to the Urban Institute. For every 100 low-income households, there are an average of 28 units available nationwide (www.urban.org).

With Donald Trump in the White House, and Ben Carson his Secretary for Housing and Urban Development (HUD), things could get even worse. The administration has proposed a 13% cut to HUD programs like Section 8 vouchers.
Already, public assistance is tight and only about 25% of those in need are served. Meanwhile, more than half a million people in the U.S. are homeless, and one-fifth of them are children. Globally, the UN estimates that 1.6 billion people struggle to find adequate housing.

The most common answer to the lack of affordable housing offered by the establishment is based on free-market thinking: let private developers build more housing.

Undoubtedly, we need more housing and we need to update the existing housing stock. But simplistic supply and demand arguments neglect the fact that it’s not profitable to build housing for the far greater portion of the demand that exists — the growing ranks of the poor and near poor.

It is far more lucrative for developers to build luxury condos for the global elite. After more than a decade of aggressive development in New York City – in the name of “affordable housing” – the results show this contradiction starkly. In a single year between 2015 and 2016, over 2.5 million people in New York applied for just 2,600 “affordable” apartments (NY Daily News, 5/11/16), while in Manhattan there are more than 12,000 unsold luxury condos because too many have been built (Financial Times, 6/8/17).

Most of these condos that are purchased, are investments, not homes. According to data from the Census Bureau’s 2012 American Community Survey, more than half of all luxury condos in midtown Manhattan are left empty for an average of ten months every year, an outrageous waste of resources (NY Times, 10/24/14).

The driving force of the problem is the way capitalism treats the housing sector as a gigantic casino for maximizing short-term profits.

Never before in history has housing been so dominated by big business. Speculation in urban areas has pushed up real-estate values, paving the way for more lucrative projects by multi-national developers. This further drives up the price of land along with rents of surrounding areas.

Developers, banks, and corporations have benefitted from a political establishment which has been more than willing to support their aggressive agenda with tax-breaks and sweetheart deals. City centers have been transformed into playgrounds for the rich as part of a “race to the bottom” to attract investment and jobs. Meanwhile, public housing assistance has been starved for decades. This shift disproportionately affects people of color and families headed by single moms.

The liberal establishment in a number of cities is promoting “Inclusionary Zoning,” whereby incentives are offered to developers to include affordable units in projects.

One celebrated “model” for this approach has been NYC Mayor Bill de Blasio’s plan to build or preserve 200,000 units of affordable housing. However, only 16,000 “affordable” units will be offered to the 25% of New Yorkers who make $25,000 or less a year. Meanwhile, 425,000 people in NYC are on waiting lists for public housing and 62,000 people are homeless.

The fundamental weakness of his strategy is that it’s entirely dependent upon private developers whose main interest is to extract as much profit as possible out of the housing market – not to benevolently build affordable housing.

Socialists support every improvement we can win to provide relief in this crisis. We reject an approach that accepts the limits of what developers and bankers will support. In that vein, we would support using eminent domain to take empty luxury condos in big cities into public ownership to house the homeless.

Speculators and their politicians won’t just give up on their profits. Solving the housing crisis will require the involvement of millions of people under the guiding idea that housing is a human right. Socialist Alternative has been at the forefront with other activists in helping build support for rent control and other affordable housing policies in Seattle, Minneapolis, and other cities.

In building campaigns on housing, we have to contend with the dominance of establishment ideas about housing which spread confusion about pro-worker housing policies like rent control and public housing.

For example, New York is often cited as a place where strong regulations like rent control doesn’t work. In reality, it worked great for tenants in New York for decades. But the number of rent-controlled units fell from two million in the 1950s to just 27,000 by 2015 due to landlord-friendly loopholes – this loss was decisive in fueling skyrocketing rents. This shows we need strong rent control laws that cover all apartments with no loopholes.

It’s true that rent control is not a silver bullet under capitalism where investment depends on profit. That’s why we need to go much further. We need an alternative to for-profit developers altogether: a massive public works program to build high-quality public housing, funded by major tax increases on big business and the super rich, and built with union labor.

Public housing has been stigmatized in the U.S. for decades as low-quality housing for the poorest of the poor. Addressing the horrendous and inhumane conditions in many public housing buildings is an urgent priority for the housing movement. But there is no reason we couldn’t build high-quality public housing, not only for current residents or the hundreds of thousands of people on waiting lists, but also for working- and middle-class families as an alternative to private development.

To ensure quality, all plans for new public housing should be overseen by democratic committees of workers and residents.

To win such reforms it certainly helps to have a fighter in City Hall like Seattle’s socialist Councilmember Kshama Sawant. She rejects money from business and fights uncompromisingly for working people. But Kshama is the first to point out that what’s been most decisive to winning housing reforms in Seattle is building a movement outside City Hall.

Historically, it’s been mass militant action like rent strikes, mass pickets, demonstrations, and mass occupations that have been decisive to winning housing reform, along with systematically organizing democratic mass organizations.

It’s not possible to provide high-quality and affordable housing for all on the basis of capitalism, particularly when looked at from an international perspective. It is possible to win many reforms, but as long as the biggest banks and corporations dominate the economy they will use that leverage ruthlessly against the 99%.

This is an important lesson from the period after World War II, when huge movements of tenants and workers won significant gains in housing. But because these movements did not have a program to go beyond capitalism, when conditions changed, the capitalist class was able to regroup and roll back those gains.

Socialist Alternative calls for rooting out the power of the billionaires by taking into public ownership the 500 biggest corporations that dominate the economy – including the banks who dominate investment and the multinational developers who dominate construction – as a first step toward building a society where housing is treated as a right for all.

To win such a program, the fight for affordable housing needs to be linked to a broader struggle of the working class. Historically the housing movement has been strongest when connected to a radical labor movement.

Many leading voices in the housing movement today have serious doubts about the key role of the working class because the composition of cities has changed with the disappearance of manufacturing. However the working class retains incredible potential power. Transit workers, telecommunications, airports, logistics, public sector, health care, hospitality, and service workers are all essential to the functioning of modern cities.

Along with workers internationally, we have a world to win. Instead of subjecting housing to the needs of profits, we need to fight for a socialist world where housing and development is planned based on democratic committees of workers and residents to make life better for all.