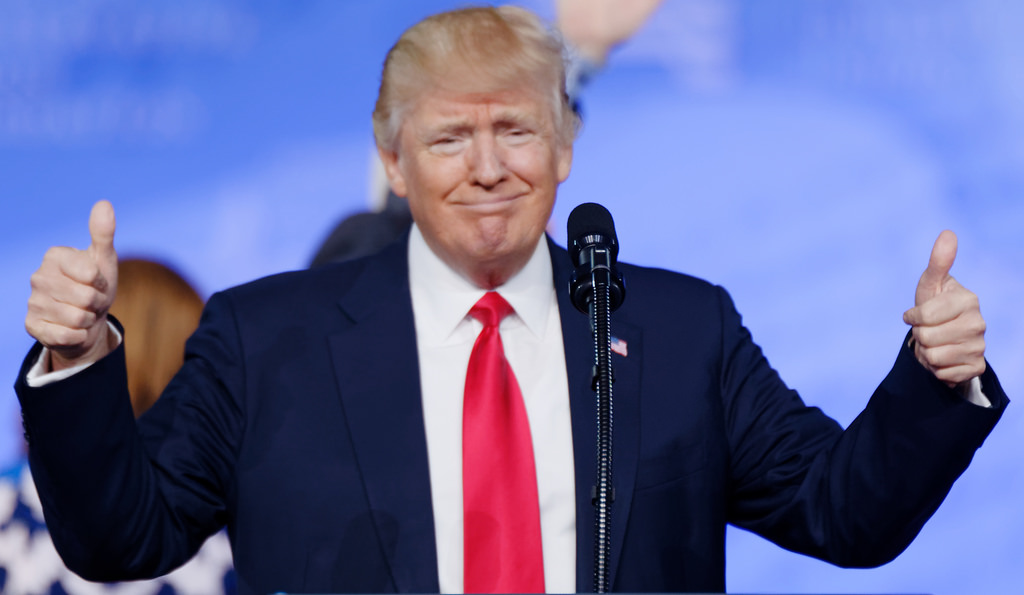 It is nearly one year since the inauguration of the odious Trump. From the outset, it was very clear that this would be a horribly reactionary administration packed full of billionaires launching attacks on immigrants, poor people, women, LGBTQ people, against education, and the environment. In August, Trump declared that there were “very fine people” among the white supremacists in Charlottesville. He and the Republicans have also threatened what remains of union rights. Internationally, the regime was, if anything, even scarier. Trump has repeatedly threatened to bomb North Korea and start trade wars with Mexico and China. He pulled out of the Paris climate accord.

We, along with tens of millions of others, feel that one year of Trump is more than enough. It’s time for him to go. In December, Trump’s unpopularity – at record levels for a president at this stage of his first term – reached a new low. A Monmouth University poll in early December showed 32% approval and 56% disapproval. Nearly half of the population thinks he should be impeached. Depending on the revelations from the Mueller investigation, Trump could be forced out even in advance of the 2018 midterm elections, though it remains more likely that he will survive for a while longer, even if increasingly damaged.

Trump and the Movement in the Streets

2017 began with mass protests, particularly the millions-strong Women’s Marches on January 21. The year ended with the #MeToo upheaval. This is a new phase of the mass women’s movement which was first ignited by Trump’s unapologetic misogyny and predation. But Trump’s attacks on immigrants also sparked mass opposition as did Trumpcare. Tens of thousands took to the streets of Boston in August and put the alt-right on the back foot.

While it cannot be said that the movement suffered a defeat in a stand-up fight with the Republicans, nor did it win a decisive victory. Trumpcare’s defeat was not a clear result of mass mobilizations. These factors have created a relative lull in protest activity where many are not clear about the role of protests and there is a lack of leadership from the unions, civil rights, women’s, and other organizations. There was also a feeling that Republican divisions would prevent them getting anything serious done in terms of legislation.

The passing of the Republicans’ tax bill should be a wake up call. This will mean a massive redistribution of wealth to corporations and the super-rich, exacerbating the record levels of inequality which already exist. It will create pressure in many states and municipalities to enact further cuts to education and social services. By ending the Obamacare mandate, it is also contributing to undermining the ACA, increasing premiums, and potentially leading to 13 million losing health coverage over the next decade. And next year, the Republicans plan to go more directly after “entitlements” including Medicaid, Social Security, and Medicare. None of this is popular. The tax plan is supported by only 29% according to Quinnipiac (CNN.com, 12/5/17). But failing to achieve anything would have been an even worse political setback for the GOP.

It is already clear that the midterm elections next November will be the most energized in recent U.S. history. There is an unprecedented level of political polarization in society. All the signs point to a significant swing to the Democrats.

Until recently, Trump’s core base remained quite solid, seeing the attacks of the liberal media as confirmation that he is fighting on their behalf. Trump’s promise to fight on behalf of the “forgotten men and women” of working-class middle America has not been fully exposed – in large part because the opposition is corporate Democrats who poll not much better than Trump himself. A serious economic crisis exposing the lie that Trump is bringing jobs back would lead to a more decisive collapse of his support. And there is no doubt that a serious crisis is on the way as new bubbles develop in the housing and financial markets.

But it is also clear that most of the population rejects Trump’s racism and misogyny and sees the vicious cruelty of the Republican agenda for what it is. If anything, there is now greater support for measures like Medicare for All than even a year ago. This is partly a reaction to the viciousness of Trump and the Republicans’ proposals.

However, the reemergence of allegations of sexual harassment and assault against Trump as well as his support for the predator Roy Moore appears to be leading to the current slide in his core support, especially among women. The defeat of Moore in the special Alabama Senate race is a blow to the Trump/Bannon wing of the Republicans but also a warning to the party as a whole of the fate that could await them in the 2018 midterms.

The Democrats clearly want to run in 2018 as the #notTrump and #metoo party. As in 2016, they seek to avoid making any substantive promises to the working class and young people. Given Trump’s downward spiral this may be enough, but it is also a very dangerous game. Millions want them to stand up and fight – for impeachment, to defend Dreamers, for Medicare for All – but again and again they refuse.

In general, the mid-terms will cut across struggle in the streets. But given the enormous volatility in the current political situation, there are many scenarios that could restart the movement in 2018 – including the fight for women’s rights, the threat to DREAMers, and the call for a new Poor People’s March (see Poor People’s Campaign & DACA update). And then there is the Trump factor: if, for example, he chooses to fire Mueller, the effect could provoke an explosive constitutional crisis.

We Need Our Own Party

For the past several years, both establishment parties have been roiled by division, reflecting the enormous social crisis in U.S. society, acute political polarization, and the profound desire for change. The ground is being laid for three or four major parties in the U.S., including “center right” and “center left” establishment parties as well as a far right and a clearly left party.

At the moment, however, the main energy on the left remains focused on trying to transform the Democratic Party into a “people’s party.” While we sympathize with those engaged in this fight, we do not believe it will succeed. At some point, a more decisive crisis will impel millions of radicalized working people, women, people of color, and young people out of the Democrats and toward building a new party based on an anti-corporate program.
If Bernie Sanders, still the most popular politician in the country, was to call for such a party, even now, it would receive an enormous echo. But Bernie should also put his authority behind the effort to build a serious mass movement to bring the opposition to Trump back on the streets. At the heart of this, we need a national organization of struggle with democratic structures that can engage in an ongoing debate on the strategy and tactics of the movement. This would be the first step towards serious political realignment. Such a mass movement centered built around demands that speak to the needs of the working class – including a $15 federal minimum wage, Medicare for All, free college, massive investment in a green infrastructure, and an end to mass incarceration – could lead to a much more serious degrading of Trump’s support.

Trump’s accession is both a byproduct and a further cause of the degeneration and decline of American capitalism. It is this deeper crisis that is leading millions to see socialism as an attractive alternative. Sanders’ presidential campaign in 2016 was a key moment in this process and, in the wake of Trump’s victory, thousands joined socialist organizations including ours. The latest sign of the potential to develop a serious force around clear, socialist ideas was the campaign of Ginger Jentzen, member of Socialist Alternative, for Minneapolis City Council. While not in the end winning the seat, her campaign redefined the political debate in Minneapolis. This also comes in the wake of Ginger and SA playing a key role in the successful fight to win the first local $15 minimum wage in the Midwest.
While 2017 saw the development of enormous mass opposition to Trump and deepened the radicalization on the left in society, there is undoubtedly a lot of confusion about the way forward. In 2018, we must rededicate ourselves to clarifying the key strategic issues facing the left and building the mass force that can bring down Trump and open the way to the working class coming back on the stage of American history.