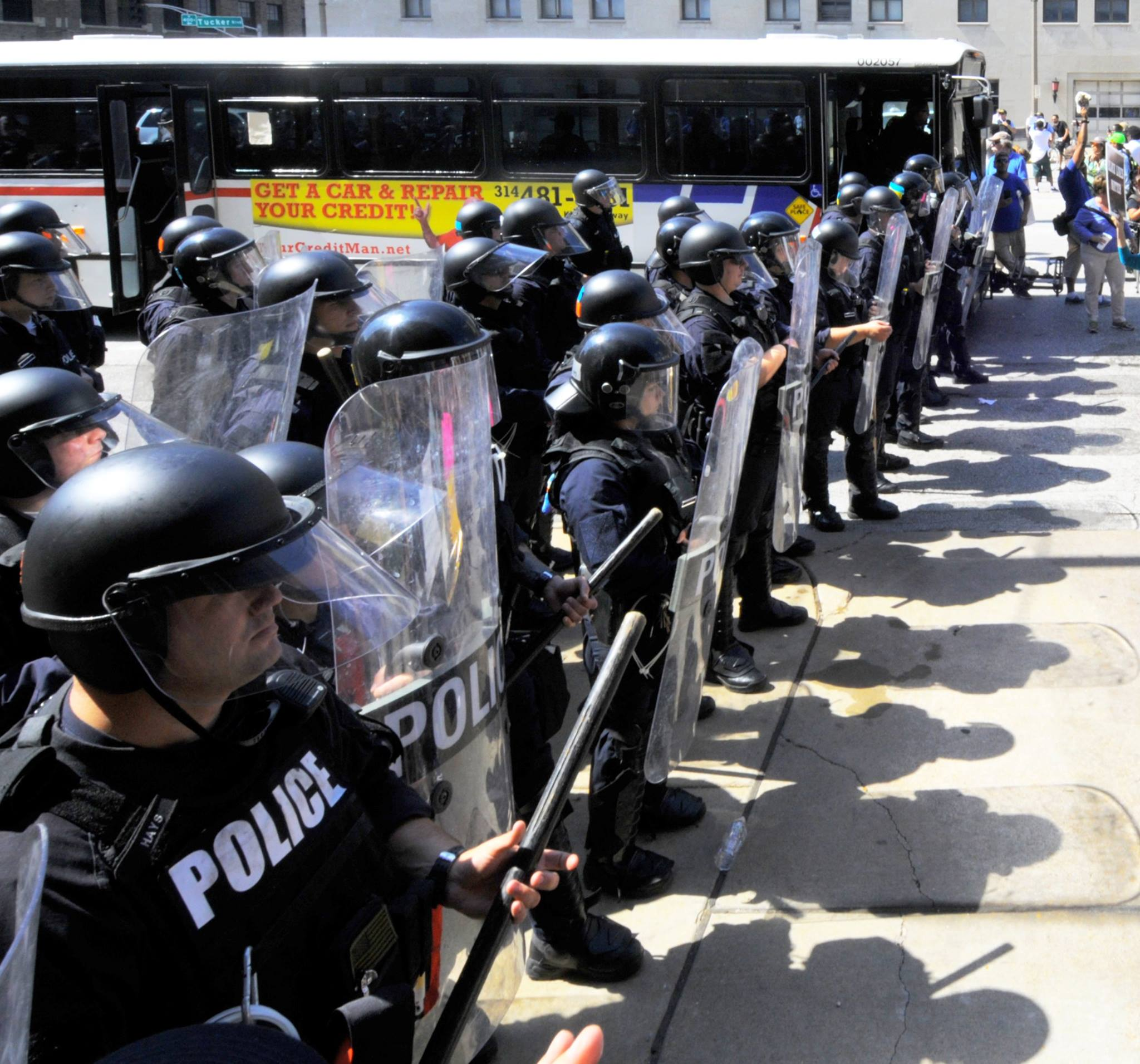 Since September 15, St. Louis, Missouri experienced nearly daily and nightly protests around the acquittal of former St. Louis Police officer Jason Stockley in the 2011 murder of Anthony Lamar Smith. The St. Louis Metropolitan Police Department (SLMPD) has killed 9 people so far this year– the most in recent history– and people have taken to the streets demanding justice. The Socialist Alternative St. Louis branch have joined the people in the streets, marching alongside seasoned activists and people new to protests. The limited corporate media coverage of the events in St. Louis following the verdict gave disproportionate attention to small acts of vandalism, meanwhile a movement grew in the shadow of state suppression.

The first day of actions began within an hour of Judge Timothy Wilson’s verdict on the Stockley case. Former officer Stockley was acquitted of killing Anthony Lamar Smith despite video suggesting that the officer planted a gun to justify the shooting. In the judge’s opinion, “an urban heroin dealer not in possession of a firearm would be an anomaly.” The decision immediately mobilized activist networks that developed across the greater St. Louis area following the 2014 police murder of Michael Brown. We, among our neighbors and friends, marched through out downtown St. Louis to protest systematic law enforcement violence and racism inherent in the judicial system. SLMPD reacted by sending several buses full of riot gear-clad officers to brutalize us, including trampling and macing one elderly woman and the medics trying to assist her. One of our comrades was violently arrested that morning, and others were targeted with tear gas.

The first day of protests continued into the night, eventually congregating in the affluent Central West End neighborhood. More than 1,000 people  marched through the streets and neighborhoods calling for justice. That first night of protests took a turn for the worse when several buses full of riot police were dispatched to the residential district. News crews immediately packed their cameras and left us in media blackout. The mass police presence turned the night’s unified march into scrambling chaos. They attacked us with tear gas, rubber bullets and some were driven into a nearby church and synagogue for shelter. AJ Robinson of Socialist Alternative St Louis was trapped in the synagogue that evening and posted online, “I’m taking sanctuary in the synagogue at Waterman and Kingshighway. Just saw floods of riot cops from all directions. They just released tear gas on my comrades outside. We prepared to protest, they prepared for battle.”

This violent police escalation set the tone for the following nights of action, which were marked by various severe and brutal events. Several street demonstrations have been ended by a police “kettle,” a tactic in which riot lines block all escape routes for protesters, demand that they leave the now-inescapable area, and then incapacitate and arrest everyone present. The first kettle of demonstrators, observers, media, and even undercover police, all of them assaulted and taken into custody. Livestreams captured the police targeting activists, and even the livestreamers themselves, with repeated mace attacks  immobilizing them. Other escalation tactics used by police included a mass arrest inside of a mall, which resulted in further harm for other vulnerable community members, undercover police driving unmarked cars through protest lines, pepper spraying disabled individuals and tazing members of the clergy, and co-opting the “Whose streets? Our streets!” chant used by protesters. Aiko Tsuchida of St Louis summed up the incident in a Facebook post: “When a protester chants ‘whose streets,’ it is a revolutionary act of the people reclaiming space that is ours. When cops chant it, it is a declaration that the state oppresses with violence.”

Street demonstrations filled the first thirty days following the verdict and continue despite tired and dwindling numbers. Affluent neighborhoods and commercial centers are targeted to bring the struggle across historic divisions of segregation. Protests in nearby St. Charles, a major white flight destination, witnessed demonstrations of white nationalism under protection of the police. Rumors of demonstrations in neighboring white-majority Clayton and Belleville prompted business districts to close early. The strategic targeting has made economic impacts that demand attention from local elites: city and county police have claimed over $4 million in overtime costs, and the lost profits of cancelled concerts and businesses closing to avoid protests has yet to be measured. Several lawsuits have been filed against the city for police brutality and illegal tactics.

The Agenda of the Political Establishment and Big Business

Lyda Krewson, the Democrat mayor of St. Louis, cancelled the previously scheduled public town halls stating that she “hears the people in the streets.” She urged the real estate developer-friendly board of Aldermen to approve Proposition P, a sales tax increase to raise SLMPD wages. The well funded Yes campaign passed the proposition in November. The city’s Democratic party establishment has firmly protected capitalist interests while giving only limited gestures regarding concerns of the demonstrating citizens. The protests around the verdict and the reaction by the state do not exist in a vacuum. While being loudly critical of violent tactics employed by the city, the protestors’ refrain of “No Justice! No Profits!” showcases growing criticism  of law enforcement and the capitalist system as a whole. In addition to calling for local accountability, St. Louis activists have demanded change around national issues, including:

The general anger at the establishment was demonstrated in the city vote against the millionaire class’ privately-held, tax abated soccer stadium and the petitioning against the highly toxic West Lake Landfill. To preserve their power, the political establishment responded with an increase in the public safety budget, the militarization of law enforcement and the state-mandated rollback of $11 minimum wage. Again and again police funding eclipses community needs. The city’s Democrat-dominated Board of Aldermen unanimously voted twice in six months to expand the bloated Public Safety budget. In response, a signature gathering campaign known as Audit STL has sprung up to demand an independent audit over the entire city. This highlights the urgent need for independent working- class campaigns and candidates to challenge the corporate Democratic Party and its agenda of austerity and law-order.

We must organize and fight back effectively

While the struggle on the ground continues in St. Louis, we can point to an elevating mass consciousness to fight back against the establishment status quo and its agenda. The multiracial character of demonstrations significantly increased since the Ferguson uprising. Local LGBTQAI organizations and community show visible signs of support and participation. More people are looking for opportunities for education and strengthening their skills to participate in legal observing, jail support, and medic assistance. A multi-pronged approach is gaining momentum. We are seeing  working people demand greater accountability of our elected representatives. The demands of the people are best represented by their words in the street: “No Justice! No Peace!,” “We know that we will win!” and, perhaps most simply: “Y’all gonna stop killing us.”

The sustainability and effectiveness of this struggle remains dependent upon a multi-racial grassroots movement rooted in working class struggles, a willingness to discuss the trajectory of the movement, develop ourselves organizationally and politically. St. Louis saw many movements come and go with the corporate elites using our differences to divide us and the lack of a united front amongst the left.  We need a broad coalition of labor, social justice, black lives matter, and socialist organizations to discuss, debate and organize to take the struggle forward. Consistent organizing and protest has exposed this injustice and law enforcement terror to the world.

As Socialist Alternative member Morgan Hunlen stated, after the first night of protests,

“Whatever you’ll hear on the news, these protests are organized, these people are not violent and aren’t here to loot or destroy. These are my neighbors, tired and fed up with the status quo, and they’re taking to the streets because time and time again the world has shown our bodies are expendable… So please support them. Support Black lives. Even if we couldn’t protect Anthony Smith, even if we couldn’t stop Jason Stockley, we will protect each other. And that is a promise. This is what community looks like.”

We need a political and economic alternative to the system of capitalism and its parties that breed law enforcement violence, poverty and racism.

Right to Work Defeated in Missouri

The Fight to Defend Union Rights In Missouri

ABOUT US
Socialist Alternative is a national organization fighting in our workplaces, communities, and campuses against the exploitation and injustices people face every day. We are community activists fighting against budget cuts in public services; we are activists campaigning for a $15 an hour minimum wage and fighting, democratic unions; we are people of all colors speaking out against racism and attacks on immigrants, students organizing against tuition hikes and war, women and men fighting sexism and homophobia.
Contact us: info@socialistalternative.org
FOLLOW US
© Socialist Alternative 2019 | All rights reserved
59 Shares
Tweet
Share59