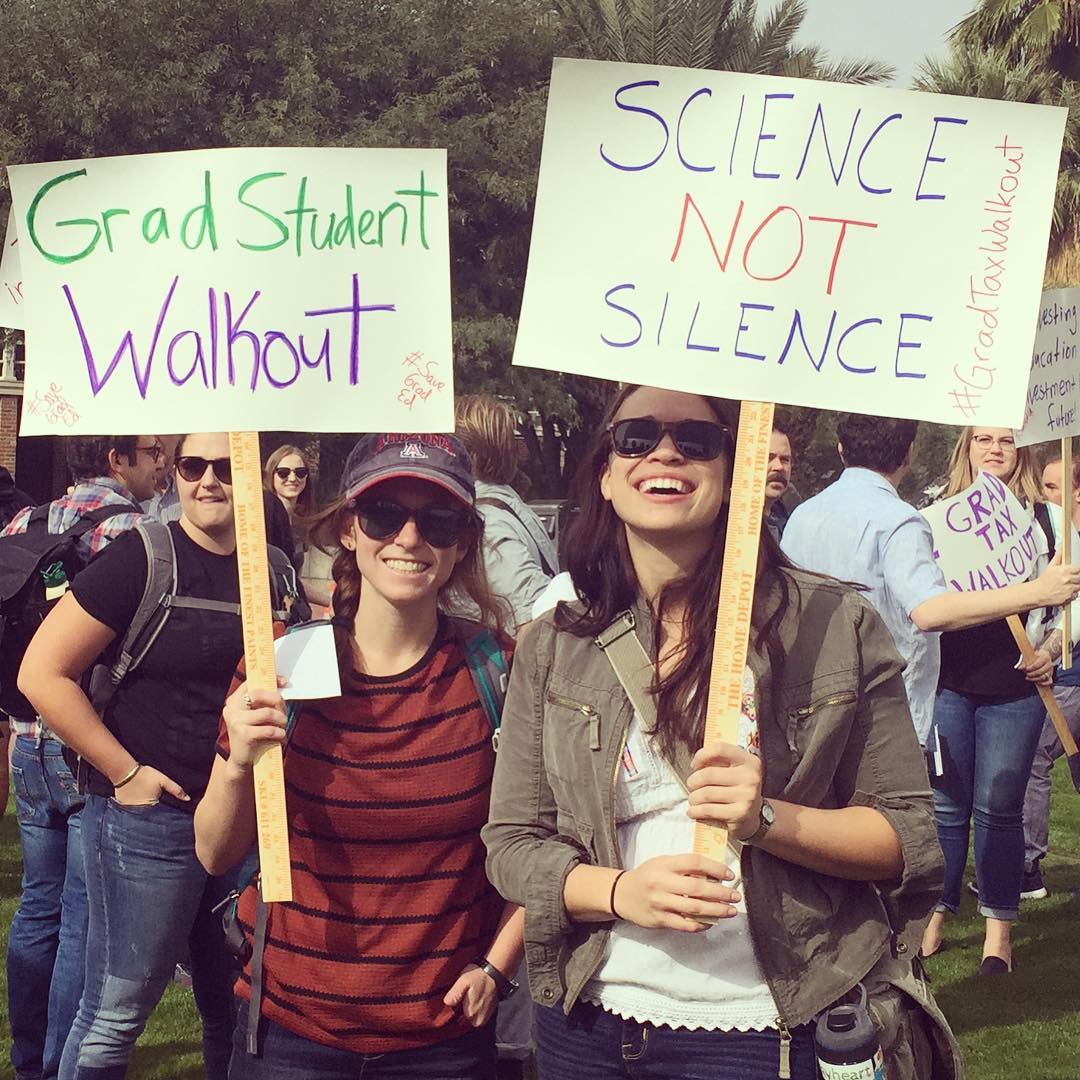 As we go to press, the Republicans’ tax bill giveaway to the super rich, which will act to massively increase inequality, is set to pass Congress. In a disgraceful ploy to minimize public discourse, the bill was introduced one day before the elections on November 6. Sold by Republican sponsors as a “middle class tax cut,” it was anything but. It is so obviously an attack on working people that even the Washington Post, the newly acquired mouthpiece of Amazon CEO Jeff Bezos, correctly declared that “Republican class warfare at its most egregious.”

Two members of Socialist Alternative, also graduate students at Ohio State University, sensing the combative mood of their colleagues, immediately organized an action committee of other students who then called a department-wide meeting on November 7. The students at OSU were organized under the banner of #SaveGradEd which was taken up by students across the country in conjunction with #GradTaxWalkOut and together organized over 60 rallies, walkouts, and sit-ins to protest the vicious tax bill.

Of course, we must acknowledge that the university administration lobby played a significant role in pressuring lawmakers. The bill would have severely impacted any university’s ability to recruit talented student workers. However, it was the militancy and speed with which graduate students organized that put immense pressure on university administrations as rumors began to swirl of graduate student walkouts and strikes across the country.

Without a doubt, having the tuition waiver and interest deductions remain untouched is a significant victory won by the organized action of students in the overall context of this audacious tax bill which will inflict harm on millions of working people.

A significant question remains for graduate students. Do they stop here, or do they broaden the movement and push forward, and how? We can be sure this was only the first round of attacks on students from Trump. There is also the looming threat to tens of thousands of immigrant students because of the cancellation of DACA. Beyond that, it’s not a matter of if there will be new attacks from Trump, but when.

Of course how we fight is as important as who. Gaining wider support was vital to pushing back the attacks on graduate students and must be expanded. Furthermore, where we did find graduate student worker unions we found the most mobilized and militant students willing to fight with us. Student workers everywhere should pursue forming unions where there is support, even in states that have legislated against it. It’s also necessary to link up with other mobilized groups who are fighting Trump.

Trump’s vicious tax bill will become law, but further victories for his administration are by no means guaranteed. In order to defeat brutal attacks like Trump’s tax plan in the future, we need to meet them with a united fightback. Working people and students must organize ourselves now to ward off Trump’s coming attacks in the next period.