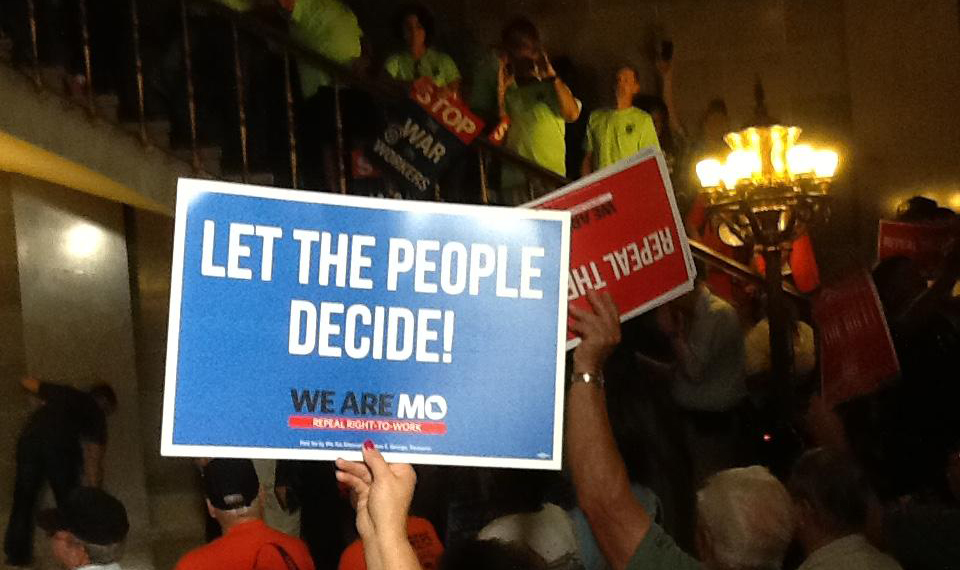 In Missouri, where unions have long been on the defensive, there is a growing understanding of the role unions can play in defending their rights in the workplace. Missouri’s right-to-work law passed as Senate Bill 19 (SB 19) was slated to go into effect on August 28, 2017, and would mandate that no person can be required to join a labor union or pay dues to a labor union as a condition of employment. SB 19 would make Missouri the 28th right-to-work state in the nation.

Labor union organizers, workers, and activists gathered 300,000 signatures, three times the number required to force the question to be decided through a referendum.

When We Organize, We Win!

Though this is a critical step forward, putting the choice to voters through a referendum is not a guarantee of a win for the labor movement. The thousands of collected signatures only put the anti-worker law on hold until next year. The campaign should continue to organize with a bold strategy or risk losing, despite mass support. Big business is willing to invest millions of dollars into campaigns attacking unions.

Missouri’s labor movement has more power than they realized, revealing itself when they took on a grassroots and participatory approach to organizing. The fight in Missouri needs to be linked to a bold national campaign to defeat the Janus case in front of the Supreme Court.
We need to organize to maintain the union power we still have left, and just as importantly, to build for more.