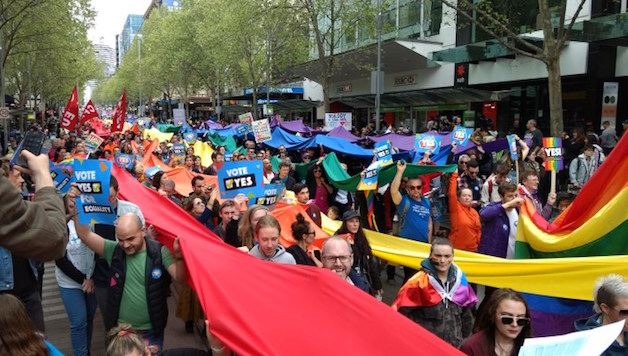 Editorial comment from the November-December 2017 issue of The Socialist, magazine of the Socialist Party (CWI in Australia)

Challenge the system that breeds inequality

As we go to press this month the marriage equality plebiscite is drawing to a close. Australian Bureau of Statistics figures already show that the turnout is much higher than first expected, and polls indicate that the ‘yes’ vote will win comfortably. This is a fantastic result and it verifies the position the Socialist Party took as far back as August 2016.

Unlike almost all other marriage equality advocates, we said that the movement should not fear a plebiscite on the issue. We were confident that the working class overwhelmingly supported equal marriage rights and that a plebiscite would actually work to further expose the major parties as out of touch.

We understood people’s concerns about the potential for the ‘no’ campaign to be laced with homophobia, but we pointed to the example of the referendum in Ireland where the ‘yes’ side waged a much stronger campaign than the bigots, in much more difficult circumstances, and prevailed.

But perhaps even we underestimated the enthusiasm that the ‘yes’ campaign would unleash. Most impressively the campaign period saw the biggest demonstrations for LGBTQ rights in Australian history. Collectively, something approaching one hundred thousand people attended protests in major cities and towns across the country.

In comparison, the ‘no’ side were unable to hold any significant demonstrations. Their campaign was mostly limited to pathetic advertisements and media commentary. That the ‘yes’ vote won despite all mainstream media outlets giving the ‘no’ side disproportionate coverage is especially satisfying.

Thousands of activists worked to doorknock, letterbox, phone bank and staff street stalls. The Socialist Party threw all of our resources into the ‘yes’ campaign. We were the first on the streets calling for a ‘yes’ vote, but we went further by arguing that the fight against homophobia wouldn’t end with marriage equality. The response we received was overwhelmingly positive.

Millions of people who usually feel disconnected from the political process were given a tiny bit of agency, and they used it to send a message to the powers that be. It was fitting that the public was able to put their mark of approval on this progressive reform rather than it purely being left up to an unrepresentative few in parliament.

While we have won the public vote convincingly we have not yet won the battle, let alone the war. For example, there is still likely to be a wrangle over the exact nature of the legislation. The ‘no’ advocates in the Coalition are seeking to include broad protections for ‘religious freedoms’ in any bill. This could provide Turnbull with yet another set of unwanted headaches and add to the instability the government faces.

‘Religious freedoms’ are in reality an attempt to maintain discrimination under another guise and all attempts to insert discriminatory clauses into the final bill need to be opposed. The ‘yes’ side should not let the campaign rest until an acceptable bill passes the Senate, and it becomes an Act of Parliament. That would see the 13-year battle for equal marriage rights finally won.

What then of the war? While one piece of discrimination will have been removed many others still exist. For example, religious exemptions in state-based anti-discrimination laws and the lack of trans and non-binary rights. In addition, LGBTQ people suffer from a 15% pay gap and bullying and discrimination is still rife.

It is a blight on society that LGBTQ people suffer a disproportionate risk of homelessness, and are much more likely to suffer from serious mental and physical health issues. Real equality necessitates winning extra funding for housing and services for LGBTQ people, including the reinstatement of all federal funding for the Safe Schools program.

Real equality is but the minimum we should demand. Socialists however argue that LGBTQ people deserve more than that, they deserve genuine liberation. By this we mean a life free from all forms of oppression. We do not consider it good enough for LGBTQ people to merely have the equal right to be exploited like all other ordinary people.

Socialists fight for a society that does away with all forms of oppression and exploitation. We seek to create a society, not based on profiteering and division, but on prosperity and unity – a socialist society where the wealth is distributed equality and where we have genuine liberation for all.

The marriage equality plebiscite has given us a small glimpse of the potential for ordinary people to come together to affect change. Let’s build on this, but set our sights much higher than one piece of discrimination alone. Let’s set our sights on changing the system itself.