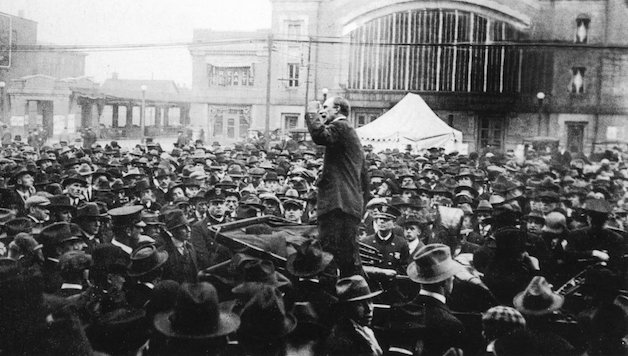 Even before the Russian Revolution, the United States had a vibrant socialist left and radical labor movement. The Socialist Party had 100,000 members and many members elected to public office across the country. Eugene Debs, the most outstanding American socialist of his generation, had received 6% of the vote as the party’s presidential candidate in 1912. Unlike most European socialist parties, the SP consistently opposed World War I. Debs was jailed for his opposition to the war and ran for president again in 1920 from jail. Meanwhile the Industrial Workers of the World, formed in 1905, led a series of pitched battle strikes against the bosses in the mining and lumber industries in the west and the textile mills of the northeast.

But there was also a sharp division within the labor movement between conservative union leaders in the American Federation of Labor and the radical wing, including the IWW. There was also a clear division within the socialist movement itself between those who believed in piecemeal reform of capitalism and those who saw that fundamental, revolutionary change was needed. The left wing of the Socialist Party responded to the Russian Revolution with enormous enthusiasm.

The pro-Bolshevik left wing of the Socialist Party had the support of the overwhelming majority of the membership. But bureaucratic manoeuvres by the party’s right wing prevented the left from taking over in 1919. This led to the formation of two parties which affiliated to the Communist International and subsequently merged. At its inception it is estimated that the communist movement in the U.S. had 70,000 supporters.

1919 was also a year of very significant class battles including the Seattle general strike and the national strike of steelworkers led by William Z. Foster who went on to be a leading communist. But the defeat of the steel strike opened the door to serious state repression including the notorious Palmer Raids when 6,000 communists were rounded up by the government and hundreds deported.

Repression and the rebound of capitalism after the war (the “roaring twenties”) led to big challenges for the early American Communist Party which survived and rooted itself successfully in sections of the working class. It was in the 1930s and 40s that the CP achieved its greatest influence, growing to 100,000 members. The Great Depression led to a massive rejection of capitalism among sections of the population. Lines of working people even formed outside Soviet embassies looking to move to Russia.

The CP played a major role in the development of the industrial unions in the Congress of Industrial Organizations (CIO) and the strike waves of the late 30s. They also played a leading role in the fight against racism and Jim Crow, helping to lay the basis for the civil rights movement. But by the 30s Stalinism had led to degeneration of Soviet Union and the Comintern and this also had a profoundly negative effect on the politics of the American CP. In the name of the false policy of the “popular front” with “progressive” capitalists, the CP played a key role in preventing the development of a broader workers party and propping up the Democratic Party in this period of profound radicalization. This lost opportunity had a profoundly negative effect on the subsequent development of the U.S. left.

But a section of the CP which was expelled from the party for supporting Trotsky continued the authentic tradition of the Russian Revolution and the CP’s early years. These pioneering Trotskyists who, among other things, led the Minneapolis Teamster strike in 1934, one of the three citywide general strikes which helped lay the basis for the CIO, were the antecedents of Socialist Alternative today.