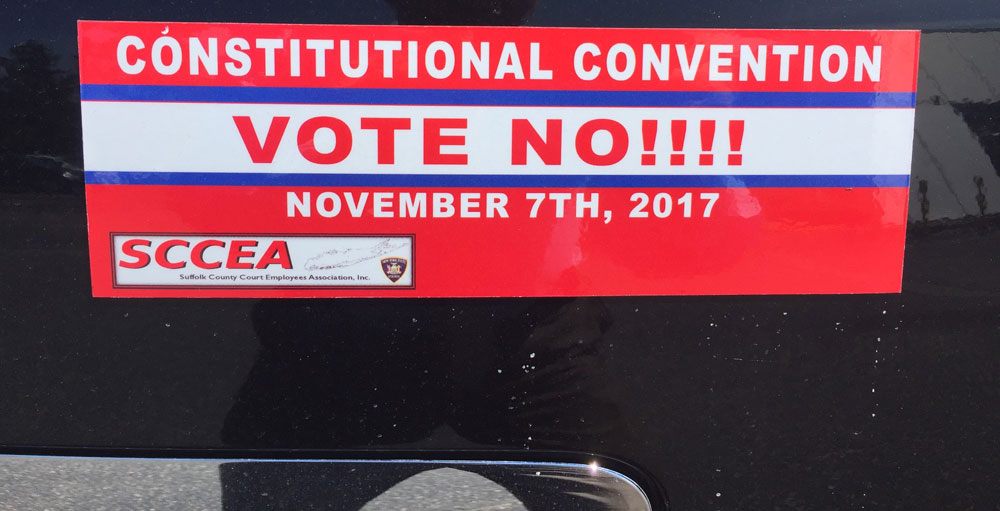 Should working class people vote in favor of holding a state constitutional convention?

On November 7, voters across New York state will have a chance to say “yes” or “no” on whether to hold a constitutional convention, nicknamed the “Con Con.” If “yes” wins, then about 200 delegates – three from each state senate district plus fifteen citywide – would convene in  the spring of 2019 with unlimited power to propose changes to the state’s constitution. All changes would ultimately have to be approved by voters.

On the surface, this seems like a democratic choice and process. But without a major political revolt by working people and a massive campaign to win a decisive number of seats, the convention could be used by big business and their lobbyists to plunder the rights and benefits of working people.

A Desire for Change

So far, polls by Siena College have shown that voters narrowly support a convention. The last poll, in September, showed 45 percent were in favor and 32 percent were against. Support has been highest among independents, who undoubtedly represent those voters who are most dissatisfied with the two major parties.

However, 58 percent of those polled also indicated they were not even aware of the vote. As election day approaches, the campaigns for “yes” and “no” will ramp up. The “no” side has raised far more money is likely to shift the vote their way. Already, the percentage of Democrats polled who oppose the convention has risen from 15 percent in July to 30 percent in September under the impact of increased campaigning on the part of the vast majority of union leaders and Democrats who oppose the convention.

The initial impulse among many people to support a convention undoubtedly reflects, to a certain extent, a desire for far-reaching change. The vote is taking place at time when Donald Trump is president and after years of economic crisis and growing inequality. On top of this, there’s been years of dysfunction in Congress and an unprecedented level dysfunction and corruption in Albany.

However, the desire for change and broader politicization remains more of a mood among a wider layer of people, and currently there is no big, organized, mass movement in society to fight for change. Although the potential is there if an audacious lead was given by unions or progressive leaders like Sanders.

There is a handful of progressive voices who argue for a “yes” vote with the argument that a convention could be used to enshrine stronger protections for women, workers, immigrants and others. One of the groups who organized the historic Women’s March in NYC in January supports a “yes” vote on the basis that it could strengthen abortion rights:

“The legislative process ‘is daunting, and the political gridlock that exists in Albany offers no comfort to any New York citizen,’ the group wrote. ‘In light of this, the only way to protect women’s rights in this state is to put the power back into their hands. [Governor Cuomo] can do this by endorsing and fully supporting a ‘Yes’ vote for a constitutional convention when it appears on the electoral ballot this coming November.’” (New York Daily News, 8/28/2017)

Others have argued that a constitutional convention could open an opportunity to pass sweeping changes like single-payer healthcare, better voting laws, or democratic home rule for NYC. Former State Senator Seymour Lachman has highlighted the rampant corruption in Albany in arguing for why a convention should be held. In the last ten years, 16 members of the state Senate, including a majority leader and an Assembly speaker, have been charged with corruption.

However, we have not seen the development of a strong “yes” campaign with real roots in working class communities and the strength to actually use a “yes” vote to mount a serious struggle for progressive reforms. In fact, if a convention is called, it’s likely that we will be faced with the need to defend some of the progressive aspects of the state constitution from big business and the right wing.

As The Village Voice pointed out: “Opponents are much easier to find.” This includes the vast majority of progressive organizations and unions who correctly warn that big business will try to use the convention to further their agenda. The United Federation of Teachers has been at the forefront and have highlighted a number of things at stake for working people if a convention is dominated by corporate lobbyists. The most important of these issues is public pensions. But the teachers also warn a convention could further increase privatization of public schools, weaken Workers Compensation provisions and open the door to exploit/privatize protected natural areas like the Adirondacks. AFSCME District Council 37 warns: “Ultimately, New York could become a right-to-work state, which would financially cripple unions and undercut organizing efforts.”

The vast majority of unions have joined New Yorkers Against Corruption. This is an organization of 150 different organizations that, according to the New York Times, includes both anti-abortion groups and pro-choice groups, Republicans and Democrats, as well as the Working Families Party along with the right-wing Conservative Party. The coalition’s message does not highlight the potential attacks on working people specifically. Instead, its main message is that a convention will be dominated by “special interests” and “it will waste millions of dollars in taxpayer money” that could be better spent on public services.

The New York Constitution mandates that voters have the opportunity to approve or reject a new convention at least every 20 years. The last time voters approved a convention was 1967. The changes proposed then were ultimately rejected by voters. The 1967 convention also showed that constitutional conventions aren’t necessarily democratic: the vast majority of delegates in 1967 were establishment politicians, not ordinary people fighting to change society.

The last time a constitutional convention made significant changes was 1938, when a convention approved Social Security, authorized New York City to fund transit through debt spending, and strengthened the rights of public works projects. The establishment politicians who convened the 1938 convention were confronted with a situation where millions of workers across the U.S. were joining radical unions and radical political organizations, occupying factories and shops, and going on strike. This also resulted in significant votes and some electoral victories for left candidates. The reforms won at the constitutional convention were concessions won by that powerful movement that was inspired by radical and socialist ideas.

The situation is different today, but the fact that there is a layer of people who feel confident that a constitutional convention could be used for positive changes is important. We sympathize with them. But this needs to be turned into a real movement. Undoubtedly, a “yes” vote would be worth supporting if there was a real mass campaign, involving tens of thousands of people, radical unions and progressive organizations, and prepared to mount a serious challenge to the rule of Wall Street and big business politicians in the state. In the absence of this, many working class people will vote “no” to a convention, trying to prevent big business from continuing their attacks on working people.

Vote “No” and Join the Fightback

“Democracy” is warped under capitalism and a constitutional convention on its own is not a solution to the problems facing working people. Given the concrete circumstances, Socialist Alternative recommends a “no” vote.

Unfortunately voting against a constitutional convention does not eliminate the threat posed by big business to education, health care, pensions, along with the rights of women, immigrants, renters, transit-riders and workers in New York State. For one thing, it’s still possible for a convention to be approved by voters, and in that situation we can’t be caught flat-footed and unprepared to fight. But, even in the absence of a convention, big business will try to use normal legislative procedures to further their agenda.

Over the past thirty years we have seen a steady erosion of rights, a systematic weakening  of unions, and the growth of historic levels of inequality. We urgently need a fightback that can mobilize thousands of people into action. But unfortunately the majority of union leaders as well as other progressive and left leaders have based themselves on a strategy of supporting and electing politicians from the Democratic Party, a party dominated by Wall Street and the corporate establishment. In their campaign for a “No” vote, the unions have chosen to join forces with anti-choice groups and right wing forces.

We need a new strategy based on building an independent mass movement, electing socialists and independent left candidates who reject corporate cash, and fighting for what working people need and not what the corporate establishment claims the system can afford.

This could start this year, by building a mass protest on day one of the next legislative session in Albany and demanding the passage of the New York Health Act – a Medicare-for-All style bill the state senate has failed to pass for the last three years – along with full funding for transit, education, and pensions paid for with a massive tax increase on Wall Street and the rich. If such an action was built systematically with active campaigns in every school, workplace, and community we could use it to begin building the kind of organized working-class power needed to defeat the corporate establishment.