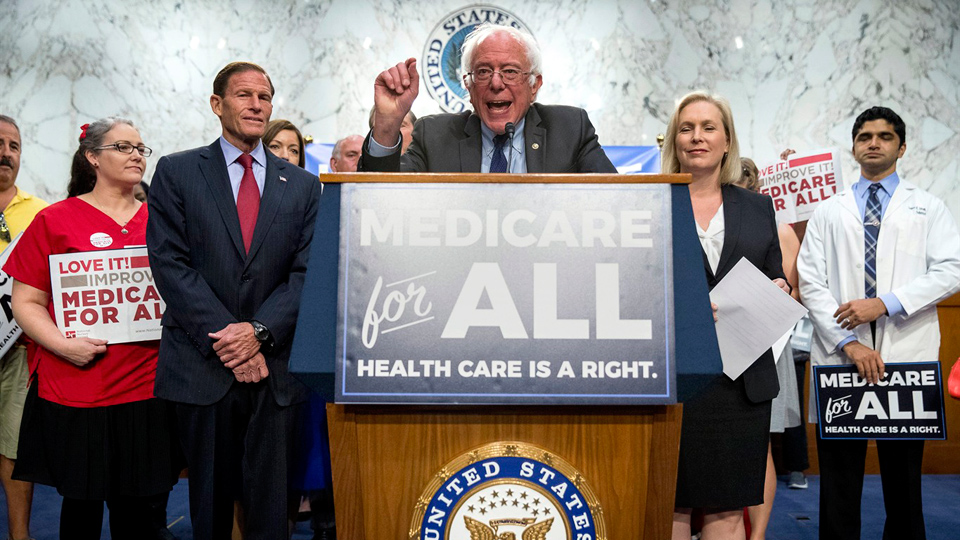 In mid September Bernie Sanders launched his long-promised improved Medicare for All plan, a first for the Senate and an historic step forward in the fight for genuine universal health care. Medicare for All, one version of a single payer health care system, removes the insurance companies from the equation and the government becomes the “single payer” for everyone’s health care.

Sanders himself points out what a huge effect Medicare for All will have on the lives of ordinary people:

“Americans should not hesitate about going to the doctor because they do not have enough money. They should not worry that a hospital stay will bankrupt them or leave them deeply in debt. They should be able to go to the doctor they want, not just one in a particular network. They should not have to spend huge amounts of time filling out complicated forms and arguing with insurance companies as to whether or not they have the coverage they expected.”

But he also points to the huge resistance that will come from corporate interests:

“The reason that our health care system is so outrageously expensive is that it is not designed to provide quality care to all in a cost-effective way, but to provide huge profits to the medical-industrial complex.”

Immediately and predictably Sanders’ proposal was attacked in the corporate media. But a majority of Americans and super majorities of young people and those identifying as Democrats want improved Medicare for All.

Democrats and Medicare for All

It is remarkable that the bill has 16 Democratic co-sponsors, including the most prominent 2020 presidential hopefuls and others up for re-election in 2018. Also for the first time, 60% of the House Democratic caucus has signed on to John Conyers’ HB 676 Medicare for All bill. Significantly, neither Nancy Pelosi nor Chuck Schumer, the leaders of the Democratic Party in the House and Senate, respectively, support either bill. The question now for the Democrats who have signed onto these bills is what they are going to do to build a real movement for Medicare for All.

While some, particularly in the House, may genuinely support this step, many of these new champions of single-player health care echoed Hillary Clinton’s haughty dismissal of Sanders’ position just a year ago. Their newfound moral compass reflects the massive pressure from the base of the party. But they are playing with fire. Most of them intend to stoke the flames of improved Medicare for All during their election campaigns and quickly douse them once elected.

Some have already admitted their support for Medicare for All is only “aspirational” (Al Franken’s words) while for others the real goal is just the insertion of a “public option” into the current system. The public option, which means adding a government plan to the state insurance exchanges, is included in the bill as a step in the four year transition to a full single-payer system. These Democrats, like Kirsten Gillibrand of New York, are really saying they want to use the enthusiasm for Medicare for All to achieve reformed Obamacare and leave the insurance companies in place (New York Times, 9/15/2017).

Statewide initiatives for single-payer plans in New York and California marshaled overwhelming voter support this year, only to be blocked by Democratic Party leaders. The Democratic Party neither led the charge to defeat any version of Trumpcare, nor the campaigns for single-payer at the state level. It was the work of grassroots activists, with the nurses’ unions leading the way, that brought these campaigns as far as they went. Activists have been emboldened by their successes and by Sanders’ bill and will expand their campaigns in both states in the next legislative sessions.

What would it take to win improved Medicare for All? Bernie Sanders and the labor movement should launch a national campaign including meetings in unionized workplace and rallies in every major city and town. The nurses’ unions and locals of other unions like ATU, CWA, SEIU and the Teamsters have brought resources, leadership, commitment and creativity to the battles for single payer healthcare, punching far above their weight. But where are the big dogs of the labor movement? In the same way that Bernie’s primary campaign popularized the single payer solution as it went from city to city and town to town, a robust union drive for improved Medicare for All would demonstrate the power and utility of unions to millions of people.

In addition, to put maximum pressure on the political establishment, the movement should run credible independent candidates in 2018 committed to universal health care against particular corporate Democrats who oppose Medicare for All. Then it should use those electoral campaigns to reinforce the movement for single-payer and to build a new political party. A party funded by the working class and its organizations, not the corporations.

Like the Canadian example, when faced with a serious challenge by a new party free from corporate influence and funding, the U.S. ruling class could attempt to cut off its development by implementing single payer health care, hoping to take the wind out of its sails.

Single-payer health care will be a vital and monumental first step on the path towards universal health care in the US. The fierce opposition of the hospital, pharmaceutical and medical device corporations to our basic demands for health security will expose the need to take these assets into democratic public ownership. As we pointed out in a recent article entitled “What Would Quality Universal Health Care Look Like?”:

A nationalized health care system would go a step further than a single-payer plan. The huge profits of the big hospital corporations, the so-called health care providers, would be eliminated entirely, freeing up social resources for patient needs. The pharmaceutical giants should also be brought into public ownership which would massively reduce the cost of prescription drugs.”

The reality of healthcare in the U.S. is a prime example of how capitalism shows no way forward for meeting people’s vital needs. This can only be fully achieved by transforming society along democratic socialist lines.