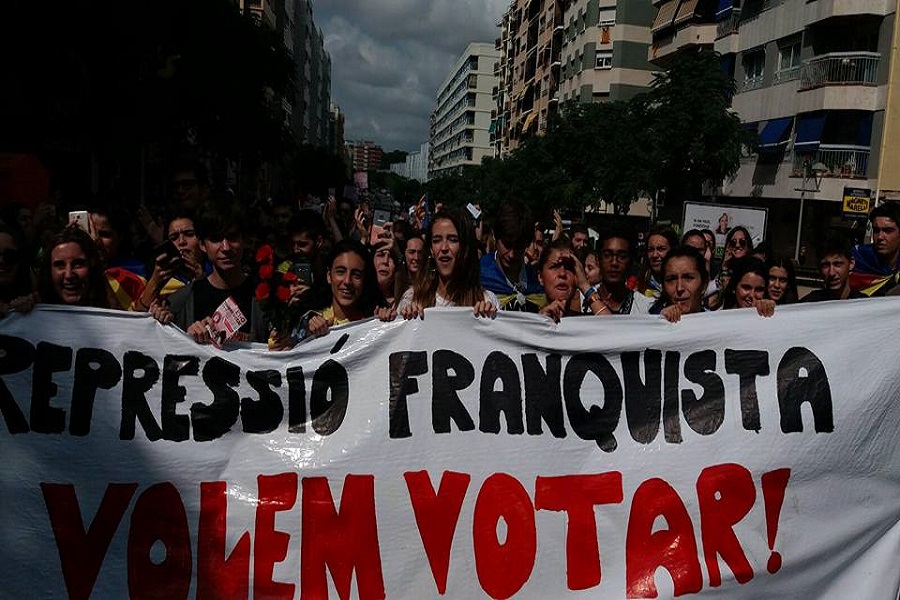 150,000 youth march in Barcelona, shouting “this is what happened under Franco!”

The general student strike and demonstrations called by the Sindicat d’Estudiants and other Left student organisations in Catalonia was an unquestionable success. Hundreds of thousands of youth in Barcelona, Tarragona, Lleida, and Girona emptied the classrooms of all universities and secondary schools, to fill the streets demanding the right of self-determination for Catalonia and denouncing the repressive offensive of the PP right-wing Spanish government.

Just as in the final years of the Franco dictatorship, youth and students have put themselves in the front line of the struggle for democratic rights and against the sate of emergency decreed by the PP, against its Spanish nationalism, its authoritarianism, cuts and corruption. Volem Votar! ( we want to vote!) was the slogan which brought the masses onto the streets, to show we are not afraid, and that we will continue to fight for freedom for our families.

In the last few days we have been subjected to great pressure from the government, Education ministry and the judicial system. Reminiscent of the dictatorship, the state prosecutor threatened students and their families to prevent us exercising out right to strike and protest. They have not dared to arrest us, but if it was up to them, they would do so immediately. The only thing which stops them from acting even more brutally is the determination of the youth and working people of Catalonia to not allow ourselves to be stamped upon. The great mobilisations of these past few days and the massive student strike today, show the way to defeat their reactionary and authoritarian agenda and win our right to vote and decide our relationship with the Spanish state.

The state, government and most of the media has unleashed a carnival of Spanish nationalism and chauvinism. We saw how they have sent up to 16,000 police and military police units to stop us voting, and crush our right to have our say. They have never made a deployment as strong to stop corrupt thieves from looting our public wealth. Or to lock up the bankers who stole billions of euros, or to end poverty and misery. The inheritors of Francoism, who never condemned the dictatorship, and who still give sustenance to fascist gangs, pass anti-democratic gagging laws and brutally cut education, health, create mass unemployment, precariousess and are responsible for misery wages… They want to give us lessons in democracy through the police baton, courts and justice system.

The Sindicato de Estudiantes will not stop its struggle, together with millions of workers and young people in catalonia for the right to decide, against all those who deny us this fundamental right. We won’t stop fighting back against those who spread reactionary Spanish nationalism, which has the record of a brutal civil war and repression which murdered millions and imprisoned, tortured, and exiled millions more. These victims have never been recognised by the government and state.

The struggle will not stop. Not only against the PP but also Ciudadanos and the PSOE leadership, who deplorably turned their backs on millions of workers and youth, in order to line up once again with the inheritors of Franco, against the people of Catalonia.

This Sunday 1 October we call on the youth of Catalonia to massively mobilise, to show on the streets that we want to vote! To resist peacefully but with determination any attempt to repress our rights. And for the immediate organisation of a general strike of all workers and students, to give continuity to this historic mobilisation until victory.