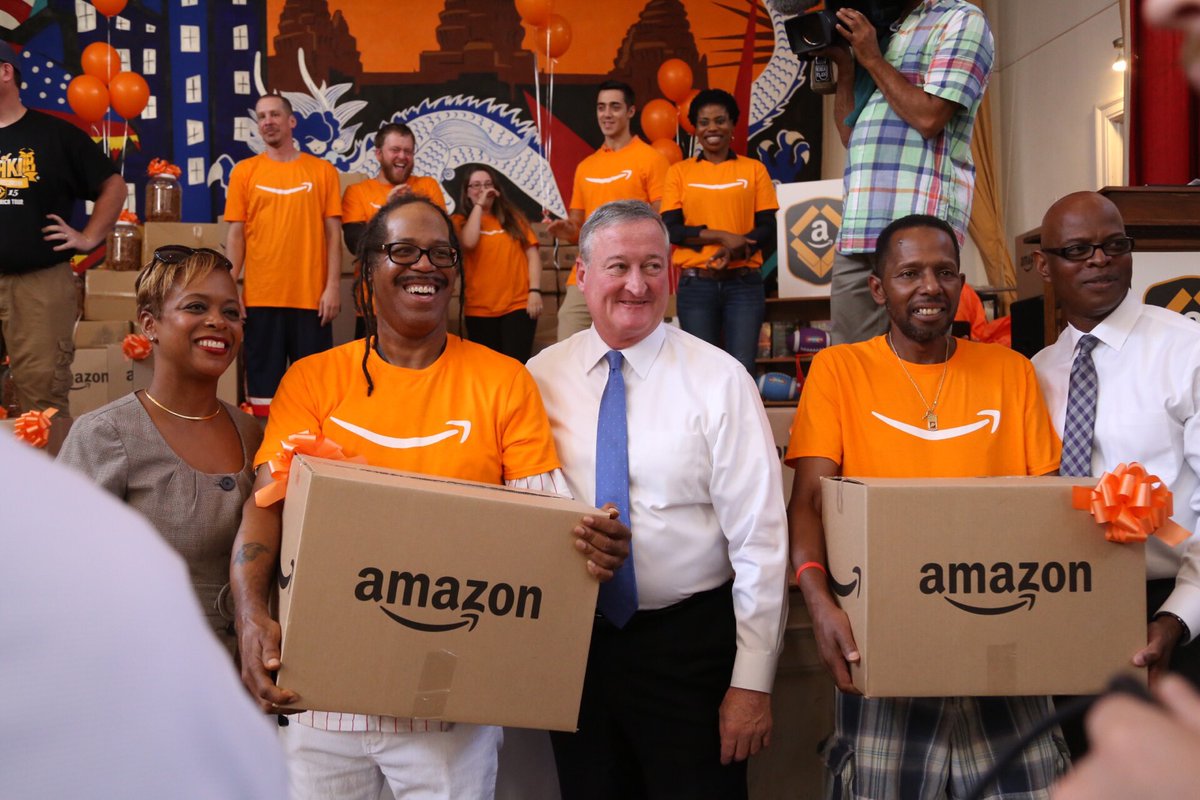 As soon as Amazon announced its intention to build a second corporate headquarters outside Seattle, elected officials from across the nation predictably responded to its request for proposals’ by tripping over each other in a race to offer massive public subsidies and tax incentives to woo Amazon. Philadelphia’s elected officials from both the Democratic and Republican Parties have behaved no differently.

We think Philadelphia would be a PRIME location for Amazon that would make people SMILE! Look forward to submitting a proposal! https://t.co/l60Wn5BVdg

This week, the Kenney administration had taxpayers buy a plane ticket for a city envoy to visit Seattle and “help understand Amazon culture” and demonstrate our city is “serious about competing for the headquarters.”

At-Large Republican Councilman David Oh introduced a bill to City Council on Thursday that “reduces the business net income tax to zero” of relocating “mega-businesses” like Amazon that employ over 50,000 workers.

Amazon is worth $460 billion, and its CEO Jeff Bezos will soon be the wealthiest man in the world. Bezos’ personal net worth is $84.4 billion dollars. He is one of 8 men who control half of the world’s wealth. Bezos and Amazon have accrued this massive wealth by ruthlessly exploiting workers in the U.S. and abroad, crushing attempts to unionize, using its monopoly power to gobble up real estate and push up land value and housing costs in Seattle, and pushing small business owners out of markets.

In any city it expands to, Bezos and Amazon can afford to pay business taxes, income taxes, and property taxes. They can also afford to pay decent wages, and provide healthcare benefits and pensions for all of their workers. Instead of ‘wooing’ Amazon here with the promise of low wages, subsidies and tax breaks, Philadelphia’s political establishment should be taking the fight for a $15 an hour minimum wage, statewide single payer healthcare, and full funding for our schools to Harrisburg and D.C. As badly as we need to address structural unemployment and poverty in Philly, spending millions of public dollars in exchange for a ‘promise’ to bring thousands of low wage, part time, dead end jobs will only result in increased corporate profits at our expense.

We need to stop to the nationwide corporate tax rate race-to-the-bottom. When cities compete against each other to offer corporations like Comcast and Amazon tax incentives, the big losers are our own residents. One third of Philadelphians live in poverty and our schools face enormous budget deficits. SEPTA is unreliable and one of the most expensive public transit system in the country. Public housing is being cut while gentrification and a shortage of affordable housing is pushing us out of our neighborhoods and threatening low-income residents all over the city. Should we really be competing with Chicago, Denver and Baltimore over who can give Amazon the most public money?

When establishment politicians like Mayor Kenney and Councilman David Oh offer public money that should be going to schools, housing, and city services to wealthy corporations for private profit, it is clear they stand with corporations and not with working class people.

Building Power and Organization Outside the Democratic Party.

In Seattle, Socialist Alternative City Council member Kshama Sawant,  led the fights that passed a $15 minimum wage and a tax on the wealthy. Sawant and SA are now building a coalition to campaign for affordable housing and supporting the independent Seattle City Council campaign of DSA member John Grant.

In Minneapolis, coming off of the recent win for $15 minimum wage, Socialist Alternative member Ginger Jentzen is running for city council as an independent on a platform of tenants rights, affordable housing, taxing the rich to fund city services, and resisting the Trump agenda.

Yo Kenney! Say NO to Amazon’s economic coercion and demand better for our workers for the right to do business in our city:

“The solution is in no way to turn away from technological innovation, the logic of economies of scale, or ease of access to goods and services. Instead, we need to unionize, and to take these behemoths into democratic public ownership, so that they are run not for profit for a few, but in the interests of the majority of working people and of society. However, this can be achieved only by building powerful movements that are independent of the politicians and parties that have aided and abetted corporations like Amazon. In Seattle, our movements need to continue to build the fight to end homelessness, make housing affordable for all, and fully fund social services.” – Kshama Sawant Seattle City Council