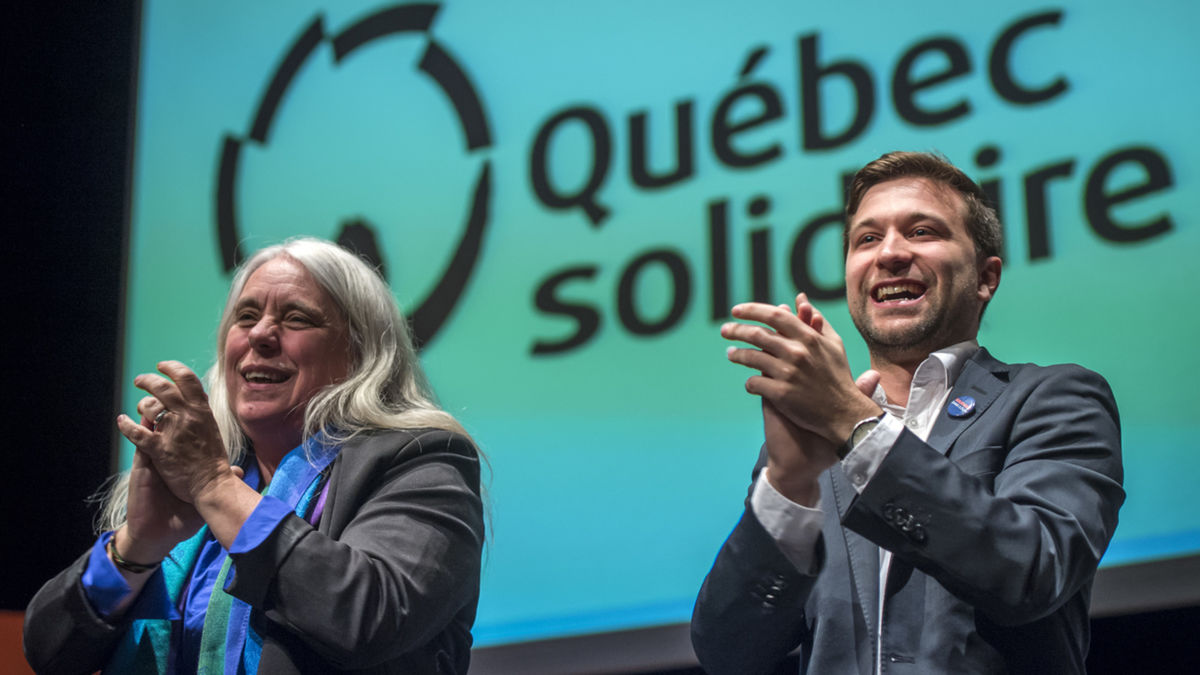 A Québec Solidaire representative explains the party’s recent refusal to make an electoral pact with the Parti Québécois.

The decision by the Quebec leftist independence party Québec Solidaire (QS) to refuse an electoral pact with the Parti Québécois (PQ) at its 12th congress on May 21, has set off a local media storm against QS, with the leader of the PQ, Jean-François Lisée, leading the charge, accusing QS of putting its interests first before those of a united front against the Liberal Party.

Here Michèle Hehn interviews Frédéric Collin, a member of Alternative Socialiste, the Quebec section of the Committee for a Workers International (of which Socialist Alternative is in political solidarity with), a QS delegate at the recent congress and a union delegate in the Quebec Federation of Labour (Fédération des Travailleurs du Québec), to discuss the recent vote. Collin was part of a team from the Alternative Socialiste to participate in the QS congress.

Michèle Hehn: Given the fact that there are three other nationalist parties in Québec, why was the Parti Québécois intent on making an electoral pact with Québec Solidaire, rather than with the other parties?

Frédéric Collin: The PQ’s motives for an electoral deal can’t be understood without knowing something about its history. Much of the base of the PQ sees the party as a left-leaning, social democratic party based on the few social reforms it won in its early days in the ‘70s, a well as the reforms for subsidized daycare in the ‘90s. But the party has long ago departed from this model.

Just look at the last time the PQ was in power in 2012-2014. Though it had a golden opportunity to push to the left in the wake of the student strike, the PQ chose instead to support the mining and petroleum industries, and continued to enforce austerity measures to the detriment of workers and society as a whole. It raised tuition fees in universities, although not as much as the previous Quebec Liberal government. During its previous time in power, from 1994-2003, the PQ mounted a vicious legal battle against workers in hospital unions. It also has a history of using back-to-work legislation when negotiating with unionized employees, even imposing a 20% pay cut in 1982.

In fact, the Parti Québécois approached the right-wing independence party Coalition Avenir Québec (CAQ), the Quebec Future Coalition, in 2016: the CAQ refused to enter into any alliance whatsoever. Since Jean-François Lisée’s election as leader of the PQ, the party has been losing 1% of voter confidence per month, with prospective voters now putting the party in third place, after the Parti Liberal du Québec (PLQ) – the Quebec Liberal Party – and the CAQ, whereas for the past 40 years, the PQ has always been in first or second place. During the last election in 2014, the Parti Québécois won just 25.4% of the vote, the lowest percentage since 1970. Lisée’s invitation to make an electoral pact with Québec Solidaire was a desperate attempt to save a house on fire.

MH: A recent poll shows that 79% of francophone Quebecois think that the Parti Liberal du Québec is corrupt, with anglophones at 67%. It’s not hard to see why: the Liberals have been the architects of huge cuts in health care and education. In addition, the recent decision by Bombardier executives to pay themselves 50% raises, after receiving huge payouts from the Québec government and laying off thousands of workers, has cemented the Liberals’ reputation as the party of big capital.

There would seem to be every incentive to create a united front by the independence parties to defeat the Liberals. Yet, the members of Québec Solidaire voted by a 2/3 majority to refuse an electoral pact with the PQ. How do you explain this?

FC: The base of the party began to mobilize itself in March in opposition to a pact with the PQ, with Québec Solidaire’s Anti-Racism committee coming out clearly against any form of alliance with the PQ.

Because of the PQ’s promotion of the Charter of Values during the 2014 elections, it was of the utmost importance to prevent a rapprochement with it. Since the charter, whose stated purpose was to forbid state employees from wearing religious symbols or clothing, politics in the province have taken on an increasingly racist tone. The scapegoats of the charter, Muslim women in hijab, would have lost their jobs in the public sector if the charter had passed. Though fortunately that didn’t happen, the charter did succeed in ostracizing these women.

Finally, only the PQ stood to gain from an electoral pact, which would have divided up Quebec’s circonscriptions (electoral districts) between the PQ and QS, in order to best leverage their partnership. This would have required that QS demobilize and stand aside in at least 30 circonscriptions, with at best the hope of winning another two or three seats. Also, by associating with a party responsible for a racist charter, QS risked loss of reputation and credibility over the long term.

MH: The political landscape in Quebec has long been dominated by the Parti Liberal du Québec and the Parti Québécois, but both parties are losing voter confidence and members. A recent article shows that the number of Liberal party members has dropped from 37,000 to 30,000 and is at an all-time low. Things aren’t much better for the Parti Québécois. A recent Léger poll conducted for the French-language newspapers put the PQ behind the Coalition Avenir Québec, 23% and 26% popularity respectively. 13% supported QS. How can QS take advantage of the political opening caused by these changes?

FC: A study shows that QS needs to have 500 militants (strong supporters) in a circonscription (district) in order to win it. Attracting these militants and organizing them is a key challenge for QS. The numbers are encouraging. The Liberals actually had 122,000 members in 2002, now, as you say, they’re down to 30,000. The PQ has 80,000 members, the same number it had in 1970, so it too is effectively in decline. Another plus for QS is the fact that its members are younger and more dynamic than those in the traditional parties. The addition of 6,000 QS members after Gabriel Nadeau-Dubois declared his candidacy is actually a 60% increase in the membership of QS. As a result, an optimistic, but not unrealistic, hope is for QS to become the official opposition in 2022.

MH: Gabriel Nadeau-Dubois (GND) was overwhelmingly elected co-spokesperson, even before his landslide election in the circonscription (district) of Gouin in late May. Yet, 2/3’s of the QS delegates refused to support his preference for an electoral pact with the PQ, which QS National Assembly Member Amir Khadir also supported. It is rare to see a base organized this way in North America. How do you explain this?

FC: QS is a democratic party, with spokespersons, rather than leaders, as the public face of the party. Though the spokespersons may share their personal preferences with the congress, the final decisions about the party’s orientations are made democratically by the congress. Although GND wished for a pact with the PQ for political reasons, he has been prevented from doing so by QS’s own base, whose positions he must now represent. The decision was arrived at in an absolutely democratic way, which, unfortunately, as you say, is all too rare in North America.

ABOUT US
Socialist Alternative is a national organization fighting in our workplaces, communities, and campuses against the exploitation and injustices people face every day. We are community activists fighting against budget cuts in public services; we are activists campaigning for a $15 an hour minimum wage and fighting, democratic unions; we are people of all colors speaking out against racism and attacks on immigrants, students organizing against tuition hikes and war, women and men fighting sexism and homophobia.
Contact us: info@socialistalternative.org
FOLLOW US
© Socialist Alternative 2019 | All rights reserved
6 Shares
Tweet
Share6