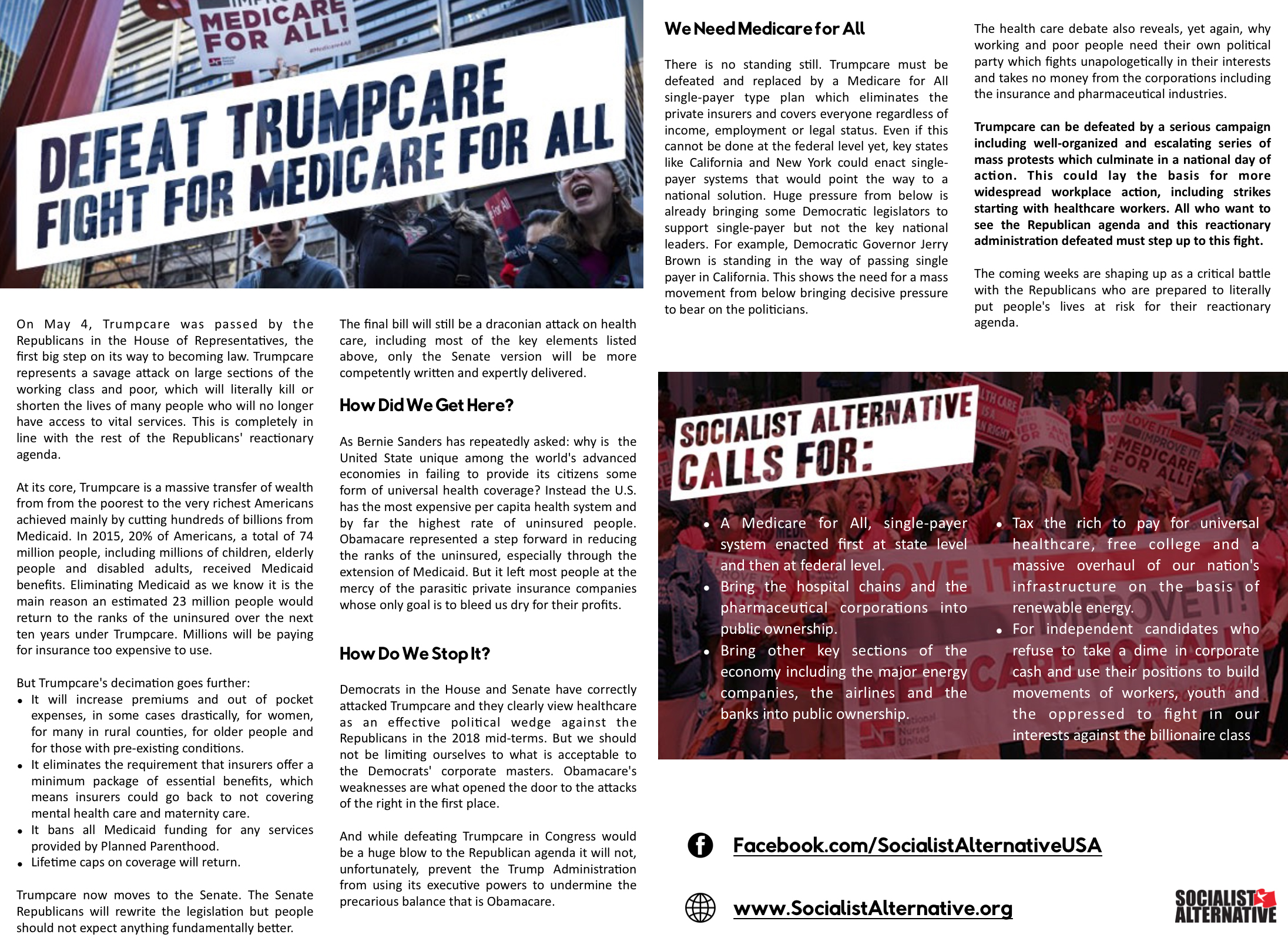 Socialist Alternative publishes the following leaflet and petition calling for Medicare for All.

Fight for Medicare for All

On May 4, Trumpcare was passed by the Republicans in the House of Representatives, the first big step on its way to becoming law. Trumpcare represents a savage attack on large sections of the working class and poor, which will literally kill or shorten the lives of many people who will no longer have access to vital services. This is completely in line with the rest of the Republicans’ reactionary agenda.

At its core, Trumpcare is a massive transfer of wealth from from the poorest to the very richest Americans achieved mainly by cutting hundreds of billions from Medicaid. In 2015, 20% of Americans, a total of 74 million people, including millions of children, elderly people and disabled adults, received Medicaid benefits. Eliminating Medicaid as we know it is the main reason an estimated 23 million people would return to the ranks of the uninsured over the next ten years under Trumpcare, or worse yet, be paying for insurance too expensive to use.

Trumpcare now moves to the Senate. The Senate Republicans will rewrite the legislation but people should not expect anything fundamentally better. The final bill will still be a draconian attack on health care, including most of the key elements listed above, only the Senate version will be more competently written and expertly delivered.

As Bernie Sanders has repeatedly asked: why is  the United State unique among the world’s advanced economies in failing to provide its citizens some form of universal health coverage? Instead the U.S. has the most expensive per capita health system and by far the highest rate of uninsured people. Obamacare represented a step forward in reducing the ranks of the uninsured, especially through the extension of Medicaid. But it left most people at the mercy of the parasitic private insurance companies whose only goal is to bleed us dry for their profits.

How Do We Stop It?

Democrats in the House and Senate have correctly attacked Trumpcare and they clearly view healthcare as an effective political wedge against the Republicans in the 2018 mid-terms. But we should not be limiting ourselves to what is acceptable to the Democrats’ corporate masters. Obamacare’s weaknesses are what opened the door to the attacks of the right in the first place.

And while defeating Trumpcare in Congress would be a huge blow to the Republican agenda it will not, unfortunately, prevent the Trump Administration from using its executive powers to undermine the precarious balance that is Obamacare.

We Need Medicare for All

There is no standing still. Trumpcare must be defeated and replaced by a Medicare for All single-payer type plan which eliminates the private insurers and covers everyone regardless of income, employment or legal status. Even if this cannot be done at the federal level yet, key states like California and New York could enact single-payer systems that would point the way to a national solution. Huge pressure from below is already bringing some Democratic legislators to support single-payer but not the key national leaders. For example, Democratic Governor Jerry Brown is standing in the way of passing single payer in California. This shows the need for a mass movement from below bringing decisive pressure to bear on the politicians..

The health care debate also reveals, yet again, why working and poor people need their own political party which fights unapologetically in their interests and takes no money from the corporations including the insurance and pharmaceutical industries.

Trumpcare can be defeated by a serious campaign including well-organized and escalating series of mass protests which culminate in a national day of action. This could lay the basis for more widespread workplace action, including strikes starting with healthcare workers. All who want to see the Republican agenda and this reactionary administration defeated must step up to this fight.

The coming weeks are shaping up as a critical battle with the Republicans who are prepared to literally put people’s lives at risk for their reactionary agenda.