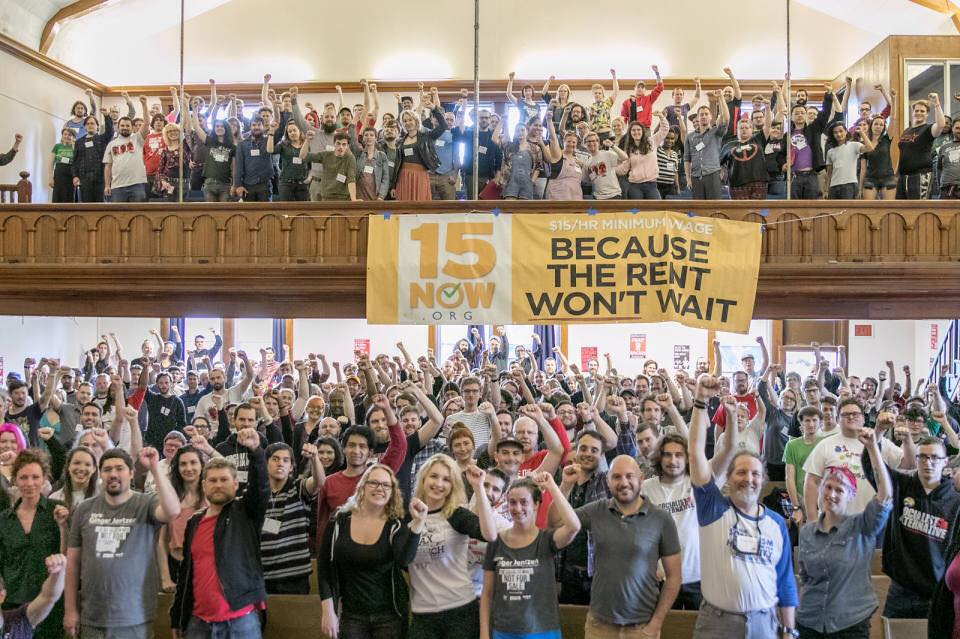 In our largest national event ever, 350 members and supporters of Socialist Alternative gathered in Minnesota for four days of political discussion over Memorial Day weekend 2017.

Participants in our biennial summer school came from across the U.S: from Seattle and Portland, to Florida, Arkansas, St. Louis, and Texas. From New York, Boston, and Philadelphia, to Los Angeles and the Bay Area, as well as members from Madison, Chicago, Minneapolis, Columbus, Cincinnati, and many more! International guests from the Committee for a Workers International, with which Socialist Alternative is in political solidarity, came from Canada, Britain, and Australia.

During the weekend, members got the chance to participate in five plenary (full school) discussions, 58 workshops, two rallies, a talent show, and a party. We sought to maximize participation by dividing the school into 20 breakout groups during several of the plenary discussions.

The school opened with a discussion of political and social developments in the U.S. The broad backdrop to the current political crisis is the massive dislocation created by the collapse of the financial sector nearly a decade ago. The system partly recovered but only on the basis of making the working class pay and ramping up inequality to almost unprecedented levels.

We took stock of the huge political crisis engulfing the Trump administration but also the capacity of this wounded beast to continue lashing out against the interests of working people and the poor. At the same time there is a temporary lull in the anti-Trump movement following the mass protests of previous months. However, we anticipate larger and more politicized LGBTQ Pride events in June and a serious fightback against Trumpcare as the Senate Republicans seek to move forward with legislation which could bring tens or even hundreds of thousands on the streets during the summer.

The school discussed the potential for further significant growth of the socialist left indicated by our development but even more explosively by that of the Democratic Socialists of America. As Keely Mullen, SA’s Socialist Students national organizer commented, poll after poll show that young people are more attracted to the ideas of socialism than capitalism and are joining socialist organizations as a way to fight back. The basis clearly exists for a multi-tendency socialist party of 50,000 or more in the next period. But even wider sections of the working class and youth are being radicalized and activated by the reactionary Trump regime. The Democratic Party seeks to contain this energy and direct it to its own benefit in the 2018 midterm elections. But the party has become increasingly polarized with its leadership fighting back in defense of their corporate donors against attempts of Berniecrats to push them to the left. Massive contradictions are building which could lay the basis of a broad left party having hundreds of thousands of supporters which could change the face of American politics decisively.

A central feature of the school was the discussion around how Marxists should fight against racism and sexism, with the need to build a multi-racial working class movement and leadership to fight all forms of oppression.

The school commemorated the 100th anniversary of the Russian Revolution by discussing the relevance of the first successful workers democracy in history as we confront a capitalist order in terminal decline.

At the international rally, Leslie from Canada discussed the colonialist history of Canada which brought about the enrichment of Canadian capitalists on the back of the working masses and poor.

In Spain, Izquierda Revolucionaria is calling for left unity to defeat the ruling right wing. Bryan Koulouris reported from a recent meeting where Mexican Marxists voted to join the CWI. Robert Bechert from the International Secretariat gave a broad report on the CWI work around the world.

The three rounds of workshops throughout the weekend dealt with a wide range of topics, from how to fight the far-right, the case for socialized medicine, and environmental struggles, to our approach towards international events, such as Mexico, the civil war in Syria, Corbyn and the Labor Party, and left populism in Southern Europe. There were also workshops on historical topics including the rise of the CIO and the Spanish Revolution, and Marxist theory workshops such as the centrality of the working class, what would socialism look like, and is a socialist revolution possible in our lifetime.

Three different well attended caucus meetings also met to discuss how to fight back in the era of Trump: The people of color caucus, the LGBTQ caucus, and the labor caucus.

But the school was not all intense political discussion and debate. On Saturday night we took our time to enjoy a talent show and a party as well as free time on Sunday to swim in a nearby lake and discuss with each other about the work we do in our local areas.

In our last night before heading back home, we held a rally for Socialist Alternative member Ginger Jentzen’s electoral campaign for Minneapolis city council.

Ty Moore, who ran, and almost won, as a Socialist Alternative candidate in 2013, discussed his campaign, as well as lessons from the successful Kshama Sawant campaigns in Seattle.

Ginger herself gave a fiery speech about taking on the establishment, as Socialist Alternative has done in practice during the powerful 2-year campaign for a $15/hr minimum wage in Minneapolis. Shortly beforehand, it was announced that the city council, after much resistance, was forced by the movement on the street, to provide a path towards passing $15 in Minneapolis!

The main tasks, coming out of this hugely successful national summer school, were to focus on the political education of our members, participate in the coming struggles around healthcare, and to build the independent socialist forces in the U.S in order to take on Trump and the billionaire class!