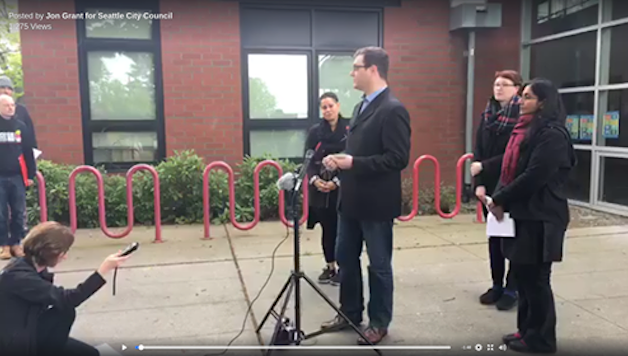 On May 17, Socialist Alternative held a press conference in Seattle to announce our endorsement of Nikkita Oliver’s campaign for Mayor and Jon Grant’s campaign for city council, both running as left independents. Most major TV, print, and online media attended, and reports of our endorsement sparked a sharp public debate within the labor movement and beyond over what the press has labelled Seattle’s “New Left.”

Oliver is running as a People’s Party candidate and Grant as an independent “democratic socialist.” Despite a thick field of Democratic Party candidates, both have a real chance of making it through the August 1 primary, where the top two candidates in each race will face-off in the November general election.

Below is an excerpt of Kshama Sawant’s statement at the May 17 press conference.

We’re standing here outside of Yesler Terrace public housing, much of which has now been torn down. What was once home to low income tenants, mainly people of color, is now being re-developed by one of our area’s billionaires, Paul Allen, who owns Vulcan, one of the biggest real estate corporations in Seattle.

Vulcan and Allen are key players in the private development process which is rapidly turning Seattle into a playground for the rich. On the basis of the private housing market, big developers are getting rich. But for the rest of us, the overwhelming majority of working people, young people, people of color, the LGBTQ community, even families that used to be part of the middle class, that same private market is deeply dysfunctional.

For our movement to win the battle for affordable housing, we need our own candidates. Socialist Alternative and I, and the growing movement of working people in Seattle, have shown how we can get organized and win real gains. In just three years, our movement has completely altered the conversation in Seattle politics. In just three years, we won the historic $15 minimum wage, stopped 400% rent hikes at the Seattle Housing Authority, and have won a series of housing victories for tenants rights and for homeless people.

But to make more than a dent in this housing crisis we need more voices from our movement in City Hall, more elected officials willing to use their positions to build real movements from below. That’s why I’m excited here today to stand alongside Jon Grant and Nikkita Oliver, and to announce Socialist Alternative’s endorsement of them.

Jon is running as an independent, democratic socialist candidate for City Council, while Nikkita is running to become Seattle’s mayor, as an independent left candidate of the People’s Party. Both reject all donations from big business and big developers, and base themselves on grassroots funding, as I did, and as Bernie Sanders did last year.

Here in Seattle, Grant and Oliver are setting an example for the rest of the country by bringing a bold challenge against the corporate Democratic Party establishment. I am proud to stand with them here today to send a clear message to that business establishment that Seattle’s working people do not accept this system based on massive inequality, unaffordability and homelessness for the many, to enable a piling up of profits for the few.