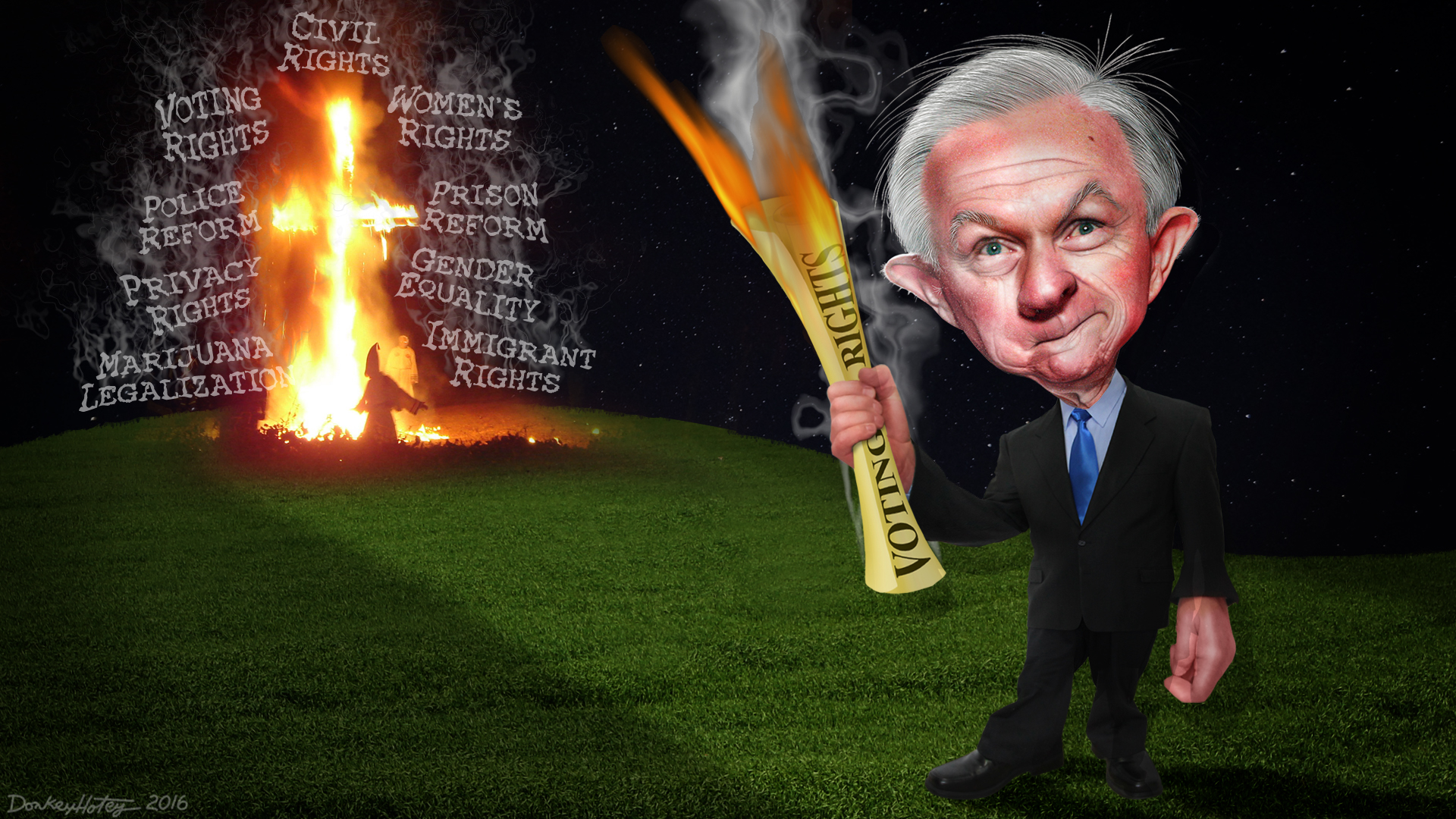 The Rise of Jeff Sessions

Attorney General Jeff Sessions has led a long and highly controversial career. Starting in the 1970s as an Alabama lawyer, he entered politics in 1981 as U.S. Attorney for the Southern District of Alabama. In 1986, he was nominated by Ronald Reagan to be a judge in the U.S. District Court for the Southern District of Alabama, sparking considerable controversy. His nomination was opposed by the NAACP and multiple other civil rights groups due to his record of racist actions and language. For example, as a U.S. Attorney in Alabama, he prosecuted three African-American community organizers for voter fraud, all of whom were declared innocent by a jury. Coretta Scott King, the widow of Martin Luther King Jr., sent a letter to the confirmation committee, saying:

“Mr. Sessions has used the awesome powers of his office in a shabby attempt to intimidate and frighten elderly black voters … The irony of Mr. Sessions’ nomination is that, if confirmed, he will be given a life tenure for doing with a federal prosecution what the local sheriffs accomplished twenty years ago with clubs and cattle prods.”

Ultimately, Sessions was deemed too racist to be a judge and his nomination failed.

In 1994, Sessions was elected as Attorney General of Alabama, where he defended a local school-funding model that starved poor and black schools of resources. This model was ultimately found to be unconstitutional. In 1996 – the same year he won an Alabama Senate seat – he defended the state of Alabama against a lawsuit from the Gay Lesbian Bisexual Alliance. The Alabama legislature had denied funding to student groups that defended homosexuality, and Sessions used the state’s “sodomy and sexual misconduct” laws to defend the decision. Those laws were ultimately ruled unconstitutional.

As U.S. Senator, Jeff Sessions’ record has been wholly right-wing and reactionary. He has consistently opposed immigration reform, opposed additional funding for the VA medical system, and opposed a bill that prohibited “cruel, inhumane or degrading treatment or punishment” of government detainees.

Jeff Sessions is now the face of Trump’s “law and order” agenda. He has re-escalated the racist War on Drugs, ordering federal prosecutors to charge defendants with the “most serious, readily provable offense,” as well as reinstating the DOJ’s use of private for-profit prisons. This shift in policy cuts across the emerging bipartisan agreement from Republican conservative figures like the Koch Brothers, Newt Gingrich, and Democratic Party liberal stalwarts Van Jones and New Jersey Senator Cory Booker that the War on Drugs, which led to a mass incarceration boom in communities of color, had to end in its current form.

Sessions has also promised to renounce consent decrees – a tool utilized by the DOJ to monitor and reform police departments that have been found responsible for abuses – essentially letting police off-leash again. In the context of the growing anti-Trump movement, states have already made various attempts to criminalize protest. There is the potential that Sessions’ DOJ could make national efforts toward attacking the right to protest, evoking the historical examples of the Palmer Raids, McCarthy’s House Un-American Activities Committee in the 1950s, and J. Edgar Hoover’s COINTELPRO in the 1960s and ‘70s.

We need a mass movement with enough momentum and energy to create a sustained, strategic fight-back against the reactionary domestic agenda of Trump and Sessions. Black Lives Matter, unions, and community organizations should unite and escalate the resistance, building working-class power and solidarity independently of the Democrats and Republicans. Capitalism and its state-sponsored attacks on our communities must be opposed. Socialism offers an alternative, but only if we fight for it.